Are you ready for some Education?

Ready to end your summer vacation?

Remember the date? But of course,

By late afternoon Friday, Aug. 1, the halls of Taylor Elementary, Mount Garfield Middle School and Palisade High were still busy with teachers and staff readying those last details before classes start on Monday.

New principals, new teachers and veteran staff members assured visitors they would be ready for the first day.

“We’re ready, no ifs about it,” stated Mount Garfield school secretary Bonita Abeyta, a veteran of many years in District 51. “We need to get the parents in here.”

She was referring to the fact that registration for classes was last week, and parents were waiting to enroll their kids this week and probably during next week.

New principal Hal Templeton smiled in at her statement. He was used to traditional late registration in his three years as assistant principal at MGMS.

In this first year as the headmaster, he is excited about the new school year.

“We had the largest group of parents at back- to-school night,” he said. “We have new phones, new computers, and new grade books, but we will be ready for the new year.”

It was busy in the school office, but Templeton was neither hurried nor hesitant to talk to everyone who came through the main office.

Templeton turned and welcomed a parent and her four children who were there to enroll her oldest daughter in the sixth grade.

Antoinette Martinez’s family just moved from Grand Junction to Clifton, and her day was busy enrolling all four children in different schools.

The boys Ezequil (9) and Timothy (7), who prefers to be called Timmy are going to Rocky Mountain Elementary while the youngest girl Serenity (2) will be in a pre-school.

First-born Amaya admitted to being a little anxious about a new school, new teachers, and new friends.

Principal Templeton encouraged her to enjoy the new school and to have a good year before the family left.

Down Highway 6 at Palisade High School another new principal Dan Bollinger was just as busy with his staff and students that afternoon.

He was never too busy to stop and talk about his new role and his feeling about becoming the school leader after being assistant principal for nine years under Matt Diers.

“He is still my boss since he is the Director of High Schools,” Bollinger smiled.

“I’m excited that school is starting. Excited to see the kids back and have the energy in the halls,” he continued as four members of the Palisade Marching Band came into the building during a break in practice.

Asking for help to get ice and containers to take back to the practice field, the young girls were relieved when Principal Bollinger immediately left the Main Office to gather other band members to get big coolers filled with ice out to the entire group in the student parking lot.

He never made his way back to the office because he was waylaid by one of the new staff members who had a problem. 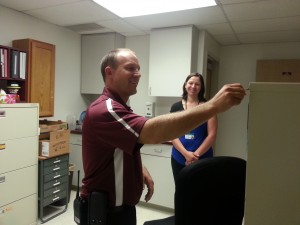 The new health assistant, Annette Bierman, needed help finding the right keys to her office cabinets. Bollinger stepped in and had all keys identified for Bierman before her supervisor, Tammy Fletcher, the School Nurse for both PHS and Taylor this year got back to the office.

“I have 15 new staff people due to moves, retirement or administration changes,” Principal Dan Bollinger explained as he moved on to wherever he was needed.

Both principals at PHS and MGMS were sure that every one would be ready by Monday.

The only concern at Taylor Elementary was the street construction on G Road, that is, the Frontage Road.

“I can’t imagine what the traffic will be like on Monday with parents trying to drop off their kids for the first day,” said school secretary Terry Ballantyne with a sigh.

That highway work is expected to last until Aug. 8—through the first week of classes.

Meanwhile on Friday afternoon teachers were working until 4, and a few were making plans to come back either Saturday or Sunday, just to be sure that they had all the details complete before Monday morning.

Cady Kragenbring, one of the three-second grade teachers, worked on a few final details. Her door sign welcomed students to “Mrs. Kragenbring’s high-flying classroom.” She was ready to start this year with a hot air balloon theme. 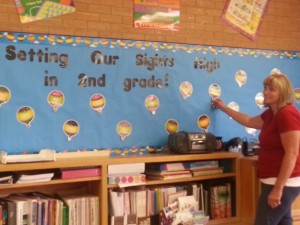 Second grade teacher Cady Kragenbring is ready to welcome her students to her “high flying” classroom.

There was not as much hustle or bustle in the halls. No students or parents coming and going, but of course, it was closer to the 4 p.m. hour and traffic was crawling on Highway 6.

Teachers were helping each other, sharing ideas and talking about weekend plans.

It was casual Friday because they too knew they would be ready to greet any and all new students with year-long plans for learning.

Don’t be late because of course,

It is the end of vacation

And time for education.