Dozens of local residents attended Tuesday evening’s meeting, January 26, of the Palisade Board of Trustees to voice their opinion on proposed new mountain bike trails on the Grand Mesa. COPMOBA (Colorado Plateau Mountain Bike Trail Association, Inc.) made the application for consideration to the Trustees since the desired trails lie within the boundaries of the town’s watershed.

The trustees decided to seek more information about the proposal. They voted to table the application, and asked the town staff to work with COPMOBA to obtain the information.

It was made clear at the meeting that this is NOT a request for the proposed Palisade Plunge trail, although the Plunge was recently added to the “16 in 2016” list of trails announced by the Governor for construction emphasis in the coming year.

COPMOBA President Scott Winans explained to trustees that the trails requested in the application all lie at least 1000 vertical feet below the lowest reservoir in the watershed, so pollution at intake should not be a consideration.

Five different trails and/or spurs were highlighted on Winan’s map of the proposed trail area with at least two of the trails already in existence as ‘bootleg’ or ‘social’ trails; meaning that they are currently being used, but are not officially recognized and maintained. 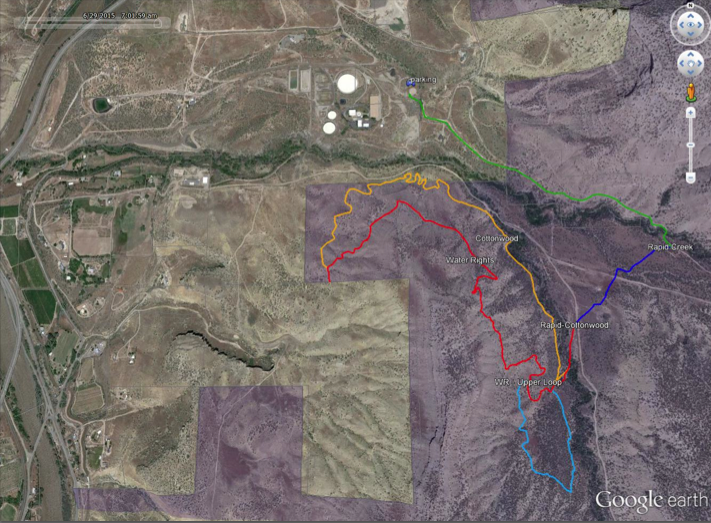 Town Administrator Rich Sales explained that the town had requested the application from COPMOBA, with the intent being for COPMOBA to take over the maintenance of the current bootleg trails; otherwise the town was going to close them to public use. It was not an ultimatum, since the trails did not belong to COPMOBA in the first place, but, rather, an opportunity for COPMOBA to add the trails to their system by bringing them up to their standards and keeping them maintained. COPMOBA took the opportunity to propose a couple of other new trails in the same area to expand the terrain as well as to appeal to a wider variety of skill levels. Sales also pointed out that hiking and biking are currently allowed in the watershed, but only on existing roadways.

Winans explained the proposal to Trustees, aided by a topographical map of the area. New trail construction would total about 3.5 miles. A portion of Rapid Creek Road would also be used, for a total trail length of about 4.5 miles. No anticipated construction pollution or pesticide/herbicide use. Water quality monitoring, spill prevention and erosion control plans are included as parts of the application.

According to John Howe, chairman of the COPMOBA Grand Valley Canyons chapter, “Our priority is sustainability.” He explained that soil loss would be negligible and that minimal long-term maintenance would be required. The trails would be multi-user-friendly, for hikers and dog walkers, bikers, and equestrian use. Signage would be posted on trail etiquette, and information on vegetation, wildlife, and historical sites would also be presented.

Arguments against the trail construction included worries about parking at the trailhead, trash and human and animal waste at the trailhead, wildlife calving in the same area as one of the proposed trails (light blue line on map), and concerns that the Palisade Plunge would also cut through the same region eventually.

Another point of contention involves a spur off one of the bootleg trails that cuts east to join the Palisade Rim Trail. The concern is that the spur crosses private property (illegally), as well as increases access to a delicate historical site. Recent vandalism to the petroglyphs has raised concerns about increasing traffic past them, and there is also a difference in difficulty between the proposed new trails and the Palisade Rim Trail that could cause inexperienced riders to get into trouble.

Following the meeting, Winans said the spur would not exist in the proposed plan. “That route would be closed and rehabbed under the proposal. There is absolutely no connection to or across private land or to the Palisade Rim Trail,” he said.

Citizens in favor of the trail application pointed to the increased number of bike trails that would be locally available to visitors, making Palisade more recreationally competitive with other areas of the valley. Increased numbers of bikers could be expected to translate into increased numbers of visitors to Palisade’s other attractions and businesses as well.

One citizen commented that the proposed trails would be safer for families with children, as well as novice riders, than the Rim Trail.

Darren Carey, owner of the Blue Pig Gallery, was also in favor of the proposal. Speaking as the newest board member of the Palisade Chamber of Commerce, Carey relayed the Chamber’s affirmative position on the trail application, representing 213 area businesses.

Longtime local resident Dan Spaid expressed concerns over the proposed mixed use, having used the area as an equestrian for years. He spoke of the sometimes unpredictable behavior of horses, and observed that “there is usually NO give and take with bikers.” Also concerned about public use of the watershed, Spade also reminded trustees of the words of Colorado statesman Wayne Aspinall, who said, “In the West, when you touch water, you touch everything.”

In the end, Trustees decided that there was not enough information currently presented in COPMOBA’s application to make a decision. Concerns such as parking, restroom availability, trash removal, closures during hunting season and wildlife disruption needed more fleshing out. There was also some concern about the condition of Rapid Creek Road to the proposed trailhead.

Mayor Roger Granat suggested that COPMOBA present the proposal to the Bureau of Land Management then come back to the town after the BLM studies it.

Winans explained that the BLM would not even consider the application if there was any chance that a stakeholder ‘below’, like the Town of Palisade, could refuse the project. COPMOBA has no reason to present the plan to the BLM until and unless the Town of Palisade approves it.

Seeing an impasse, Trustee Penny Prinster moved to table the application until the necessary information is received from COPMOBA. Trustees agreed unanimously. There is no date set for presentation of further information to Trustees; COPMOBA could also decide to withdraw the application altogether.

Finishing touches were put on an agreement between the Town and the owners of the Peach Street Distillery by making a few changes to their Conditional Use Permit (CUP) with the passing of a resolution regarding the encroachment of a building. A corner of the building is currently in the town right-of-way at the corner of Second and Peach Streets. The distillery will be moving some of their operation into the building formerly occupied by DeBeque Canyon Winery, adding some outdoor storage as well. Since the building cannot be moved, Trustees decided unanimously in favor of allowing the easement.

Public Works Director Frank Watt gave a progress report on the chip-seal project proposed for Iowa Avenue later this spring. Although the town has $100,000 in the budget for the project, the cost estimate is coming in at $118,000. To add sidewalks, curb and gutters to the project as well would add an extra $155,000, for a total of $273,000.

Watt explained that the project will need to be scaled down somewhat just to get the chip-seal done, and also discussed the desirability of rebuilding curbs, gutters and sidewalks on both sides of the street. Trustee Bennett Price pointed out that if the sidewalks don’t get done when the street is repaired this year, it will be another ten years before it is up for another overhaul. He felt that the citizens deserved safe sidewalks on one of the town’s main thoroughfares before that.

Watt is also looking at the conditions of the underground utilities before making any major repairs to Iowa Avenue. He agreed to bring more alternatives to the board at their next meeting, since decisions will need to be made regarding the budget shortfall for even the basic chip-seal.

Police Chief Deb Funston requested an amendment to Section 3 of Palisade’s Municipal Code regarding disorderly conduct and fighting in public places. She explained that it was not a major change, more of a clarification that would make it easier for officers to deal with certain types of public disturbances. The ordinance amendment was approved unanimously.

Fire Chief Richard Rupp thanked the local Rotary Club for the donation of $2,300 for the purchase of heart monitors for use in local schools and facilities.

Mayor pro-tem David Edwards recognized the donation of 30 banquet-style tables with 5 carts to move and store them from the Colorado Municipal League. The tables were delivered to the new “classroom” in the Civic Center/Fire Station last week.

All trustees were present for the meeting. The next meeting of the Board of Trustees will be held on Tuesday, February 9, 2016, at 6 p.m. in the public meeting room of the Civic Center at 341 W. 7th Street in Palisade. Meetings are open to the public.