Mesa County Clerk and Recorder Sheila Reiner spoke at Tuesday evening’s meeting of the Palisade Board of Trustees, Oct. 28, addressing the printing issues surrounding the Palisade ballots for next week’s election.

About three dozen interested citizens were on hand, as well as owners of the Colorado Alternative Healthcare Center, Jesse and Desa Loughman, who were able to question Reiner about the printing errors. In addition to answering the Loughman’s questions, Reiner invited them to visit her at the county clerk’s office to see how the procedure works.

Of the 2 precincts in the Palisade area involving 1,460 voters inside the town limits, errors were made in one precinct, involving approximately 107 ballots. Ballot Questions 2A and 2B, regarding the sale and taxation of recreational marijuana in Palisade, were left off some ballots. All 107 were re-issued and mailed to voters. Of the voters that had already returned their ballots, 9 have been found to need a supplemental ballot including the two questions.

Reiner expressed confidence in the printer, saying that she will use them again. The printer has provided ballots for Mesa County elections for the past six years without problems, and she feels that they can still be trusted. 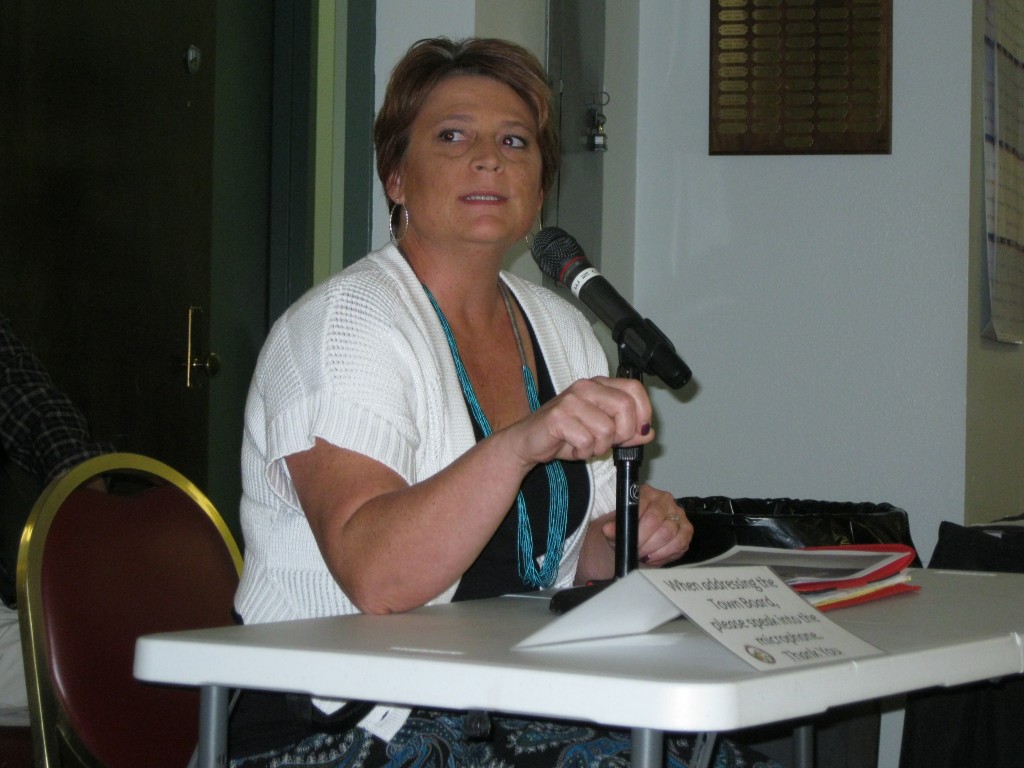 Mesa County Clerk and Recorder Sheila Reiner attended Tuesday evening’s meeting of the Palisade Board of Trustees to explain the ballot printing errors to trustees.

Inari’s Bistro owner Hiro Izumi was granted a new liquor license, which he had inadvertently let lapse. After going through the entire application process with the State of Colorado Department of Revenue for a new liquor license, trustees also voted to renew his license from the town, allowing him to be a full service restaurant again. Trustee Penny Prinster was the dissenting vote, objecting to the notice that Izumi has posted on the door of his restaurant that incorrectly blames the Town of Palisade for his license lapse; as well as to his treatment of town staff while they tried to help correct his problem.

In other business, trustees passed an ordinance amending the Palisade Municipal Code concerning imposition of liens for unpaid utility charges. With so many foreclosures and quick sales going on, the process needs to be sped up so that the balances can be collected in a timely manner without interfering with a property transfer.

The trustees also agreed to send a letter to the Mesa County Commissioners regarding their possible cut in funding for the Mesa Land Trust. The trustees feel that the Land Trust serves an important function in keeping agricultural land agricultural. Properties protected by the trust cannot be developed, and must stay zoned for agricultural use. Trustees are supporting the current level of funding, requesting the commissioners to find something else to cut. According to the Land Trust, protected local orchards produced over $2 million in peaches last year.

Town Administrator Rich Sales updated trustees on progress on the 2015 budget. He should have the most current proposal ready for their approval in the next week or so, since it must be approved before the end of the year. Some of the adjustments made over the last month include a $50,000 fire truck that was removed from the budget for this year, increased vehicle maintenance, and making possible an additional $5,000 pledged to the Palisade Chamber of Commerce, and a slight increase in salary for code enforcement officers.

Sales also discussed the move by the US Fish and Wildlife Service to list the Yellow-Billed Cuckoo, supposedly a resident of the Colorado River basin, as endangered. He explained that there is still some question as to whether the species along the Colorado River is unique. Listing the Cuckoo as endangered could possibly affect the future of the Riverfront Trail, as well as having possible effects on Riverbend Park here in Palisade.

It was suggested that a letter of support be drafted, along with Fruita, Grand Junction and Mesa County, agreeing with a letter already written by the Colorado Division of Natural Resources.  The letter would be instead of a letter advancing Palisade’s own arguments against listing the bird as endangered. Public Works Director Frank Watt also stressed the need to protest the possible listing of the bird. He said that members of the local Audubon Society are not in favor of the listing either.

Sales announced the second place finish for the Palisade High School Bulldog Marching Band in the state competition in Parker on Monday, Oct. 27. Although the weather did not cooperate, the Bulldog Band put on a performance to be very proud of. (Note: the Bulldog Band will put on a special short halftime performance at Stocker Stadium on Friday evening, Oct. 31, and a final performance of their award winning routine at the conclusion of the football game, Palisade vs. Delta, that starts at 7 p.m.).

Police Chief Tony Erickson reported on an unauthorized hunter and killing of an elk in the Palisade watershed. Showing a photo of a truck taken by one of the ‘game-cams’ installed at various locations throughout the watershed, Erickson asked for help in identifying the driver, whether or not he turns out to be the hunter in question. Both Erickson and Administrator Sales stressed that the Colorado Department of Parks and Wildlife takes poaching VERY SERIOUSLY.

Palisade police officer James Baker was awarded what is thought to be the department’s first ever commendation for going above and beyond the call of duty. Baker took it upon himself to do a few extra wellness checks on a Palisade senior who seemed to be having some difficulties. When she did not respond one day to the knock on the door, Officer Baker did more investigation and found that the resident had injured herself inside her home, and needed help.

Public Works Director Frank Watt gave a brief update on the Second Street project.  The new sidewalks will be prepped to install streetlights, but they will have to be purchased at a later date.

Trustee Bennett Price questioned Watt on the timetable for needed improvements to Milleman Avenue; unfortunately, it cannot be worked into next year’s budget without an increase in town revenues.

The successful Trick or Treat Street, Touch-a-Truck and the Pet Parade on Oct. 24 attracted more than 600 kids with 400 of them also attending the Halloween Carnival later. Fire Chief Richard Rupp reported that the ‘great’ pumpkin weighed in at 95 lbs. The closest contestant guessed 98 lbs. for the win.

The Planning Commission will be meeting this Monday, November 3, in the Civic Center meeting room, 341 7th Street, in Palisade, at 6 p.m., and the next Board of Trustees meeting will be held on Tuesday, November 11, at the same location at 6 p.m.