“I wanted to show people the differences of what used to be, and what is now,” Mayor Roger Granat said in an interview.  The float also displays today’s boxes made of cardboard.

The town and the Palisade Chamber of Commerce are sponsoring the 4th of July parade and games in Memorial Park. The parade starts at 9 a.m. on Friday the 4th at the Fire station, marches to 3rd Street, then south on Main Street, and ends at the park.

The town of Palisade this year is celebrating its 110th anniversary, holding special events throughout the year.

Granat’s father, Lindy, and family, came to Palisade in 1920, and his father started making the wood peach boxes when he was 12.  He pointed out that his father built the box maker that is on the float.

Roger Granat recalled that he and his brother, Gary, made boxes for two years, probably in 1952 and 1953. Gary got another job, Granat said, so Roger and his sister, Ruth, made boxes.

Lindy Granat built the box maker.  It has two sections, the box bench, and the stripper which feeds nails. In addition, a stitcher machine, with an electric motor, drove nails on both sides, “And you just moved the box through,” he explained.

One person could make 300 wood peach boxes a day on the box bench, Roger Granat said.

The co-op and United fruit growers had big electric box maker machines.  Granat would be hired to work on them. “You got into a rhythm. You stood on the pedal and you fed that thing as fast as you could go,” he said.

Granat said the family could make 300 wood boxes an hour on the stitcher.  The big box machine would make 500 to 600 boxes an hour with a good worker, he said.

Family members also worked in the packing shed.  There were adult brothers, sisters, aunts, and a sister-in-law.  Granat said they had fun and sometimes pulled jokes on each other.  Once, for instance, one box was packed in wrinkled paper, peach stems, etc., and it was the only one that didn’t pass inspection.

“They wrapped each peach individually in a piece of paper. A lot of fun was had back then,” Granat said. “The wrapping was ‘just so.’”

Granat talked about harvest time and the workers.  A lot of help came from Pineville, Mo, which was “like a family reunion when they came out,” he said.

During the harvest, “Dad had 45 to 50 people working for him,” Granat said.  In fact, during harvest, “Palisade had 6,000 extra people, and the labor camp was full.”

Harvest would last 10 days to two weeks, but sometimes would extend to six weeks, he said. 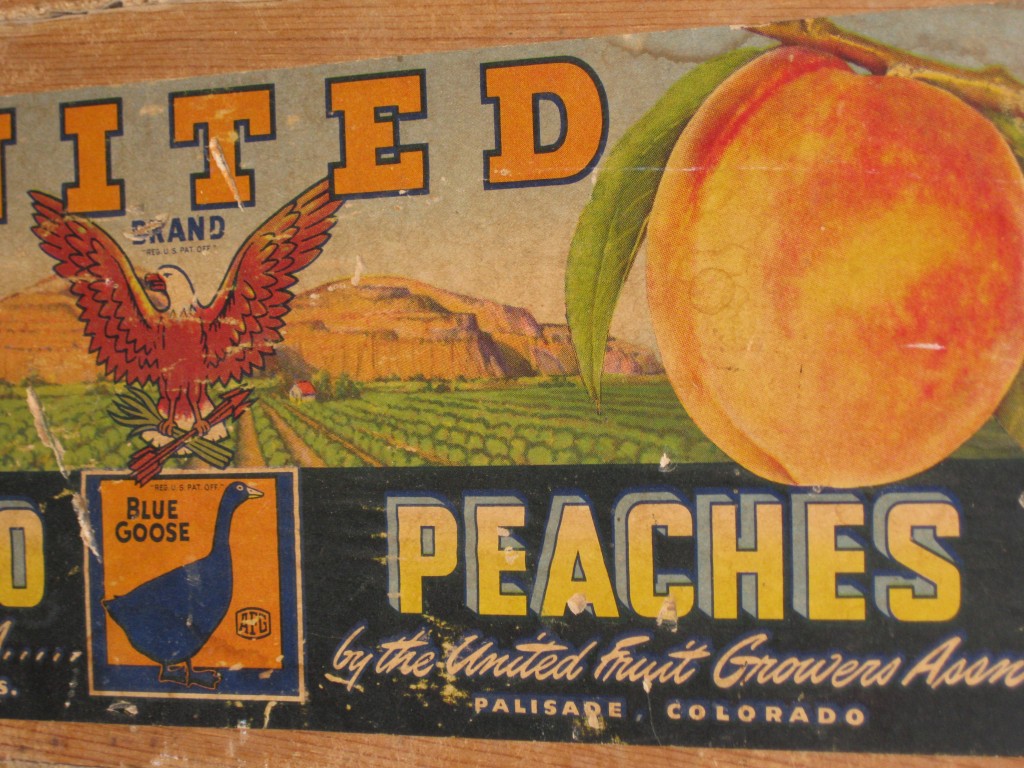 Mayor Granat said his father had a collection of peach company labels.  A copy of the collection is now held by the Palisade Historical Society.

Asked about the earliest peach shipments, Granat said peaches then were packed in bushel baskets which were shipped by railroad freight cars.  The first peach orchards were started along Rapid Creek in about 1893 or 1898, he estimated. Later, growers planted peach orchards in the Vinelands, also known as Poverty Flats at the time.