The Palisade Tourism Advisory Board (TAB) at its January 6 meeting heard a request for volunteers and sponsors to support an event at the Wine Country Inn to benefit the Marillac Clinic.

The board also heard Palisade Historical Society plans for an all-day “dam party” in June at the Palisade Community Center marking the 100th anniversary of the dedication of the Roller Dam in De Beque Canyon, east of Palisade.

TAB Chair Cassidee Shull announced a January 20 deadline for the 2015 wine festival poster contest.  It is sponsored by CAVE (Colorado Association for Viticulture and Enology), in Palisade.  Shull said there will be a free reception on January 23 at the Blue Pig Gallery.

Jean Tally, a member of TAB, asked at the meeting for volunteers and sponsors to sign up for this year’s Edesia food, wine, beer and spirits event on March 29 at the Wine Country Inn.  Phone 970-464-5777.  Proceeds benefit the Marillac Clinic.  It is described as a community-funded medical clinic providing care to Mesa County residents with low and moderate incomes.

Guest speaker, Priscilla Walker, chair of the Palisade Historical Society board, outlined the society’s plans to observe the 100th birthday of what is known as the Roller Dam, located east of Palisade on the Colorado River.  Historically, the name of the dam is the Grand River Diversion Dam.  Today, it is operated by the Grand Valley Water Users’ Association.

Walker told TAB members that the dam “is the life blood of the Grand Valley.” The dam diverts irrigation water, and, without the dam, “there is no one here,” as well as no Palisade peaches.  The 100th anniversary of the dam is timely, she noted, because of ongoing discussions to develop a state-wide water plan.

There will be a media tour of the dam the day before the party, Walker said.  Volunteers will dress in 1915 style clothing, “to recreate a photo we can’t find.”  The missing historic photo showed dignitaries on top of the dam at the dedication.

The historical society is also supporting preparation of a 30-minute documentary about the dam and it is expected to be aired on PBS.  Sponsors’ names will appear in the documentary.

At the TAB meeting, Walker displayed the historical society’s “mobile museum” which shows photos and text about the construction of the dam.  The motto on the display is, “The dam water keeps us green!”

Walker also reported that the society will publish a 32-page booklet about the history of irrigation in and around Palisade, to include the history of the Roller Dam.

Rich Sales, town administrator, reported at the meeting that the town obtained grants that will allow it to purchase land at the former Cameo town site.  The town will lease the land to Colorado Parks and Wildlife, which will then plan and develop a sports shooting complex.  The town of Palisade has promoted the plan to encourage economic development and year-round activity.

Sales said that hopefully TAB will be able to include the shooting complex in its marketing programs in a few years.

The two grants amount to $3 million, he said.  Half will go toward purchase of the land, and half will be for design and roadwork.

Sales said the goal is to raise $15 to $20 million for the development.

Sales said in an email later that funds to be raised will be for construction of archery, pistol, rifle and shot gunning ranges, both indoor and outdoor.  A classroom is also planned.  Work will include parking lots, road improvements, equipment, supplies, etc.  “Design and phasing of this work will be done by the Colorado Division of Parks and Wildlife,” he pointed out.

At the TAB meeting, Sales said Colorado Mesa University has become a supporter of the complex and is considering holding collegiate-level sports there. TAB member Tally asked if the Olympic committee has been contacted.

“There will be Olympic-style ranges,” according to preliminary planning, Sales said.

Sales said that after Parks and Wildlife leases the land from the town, the current illegal biking in the area will be closed.  However, the 1,800 acre site offers plenty of room for future development of bike trails, which are considered part of the economic development plan, he said.

Sales said he also foresees development of a bike route along North River Road to the Cameo site.  In the future, Sales also sees possible development of a pedestrian bridge to Island Acres State Park.

Cassidee Shull, TAB chair, deferred a full review of marketing programs in 2014 and a look at 2015 programs until the February meeting when consultant Teri Cavanagh, Cobb & Associates, would be able to attend.

TAB member Juliann Adams reported that the Air Canada magazine featured an article, “Wines with Altitude,” about wines in Colorado, including the Grand Valley.   “It’s a really nice article,” she commented.

Stan Stephens, a newly appointed member of TAB, suggested adding a “re-marketing” feature for visitors to the palisadetourism.com website.  Stephens said the concept is common in digital marketing.  Visitors who have visited the website later see banner ads about Palisade while on other Internet sites.

Stephens offered to set up the ad feature.  TAB member Tally asked if he would coordinate with Cobb & Associates and he agreed.

Shull said review and plans for 2015 marketing could be an opportunity to discuss her proposal to create new advertising and/or create a new logo for town advertising.  At the November meeting, Shull suggested giving the town’s logo a facelift.  The logo includes the motto, “Life Tastes Good Here—All Year Long.”

Shull said she knows her proposal is unpopular and that possible changes would be up to the trustees to adopt.  Tally commented that she would prefer new ads instead of a new logo.

Juliann Adams, director of the Palisade Chamber of Commerce, announced that the chamber office will move in about two weeks to a larger space in the same building.  “We’re excited about this,” she said.  The new address will be 309 S. Main St., but mail will still go to the post office box number.

Chair Shull said she would like to see a list of all the upcoming festival dates and their websites.  Adams said the chamber can do it.

Shull said there have been four resignations from the board in the last two months and she asked for names of people who might be interested in joining the board.  The four who left are Marsha Kosteva, Brooke Webb, Theresa High, and Kim Henderson.

Shull welcomed a new member, Stan Stephens, to the board.  Stephens said he opened Long Point Digital in Palisade a year ago.  The business provides digital marketing services.  The other board members introduced themselves and their businesses.  Tally and Brant Harrison noted that they were members when the board was formed.

At least two of the board members need to be residents of Palisade, Sales, town administrator, noted.  Tally said the board has tried to be sure membership reflects the different segments of the business community.

The one-hour meeting was held at the Palisade Civic Center.  The next meeting is scheduled for Tuesday, Feb. 10, noon, at the center.  Agendas are posted on the town website. 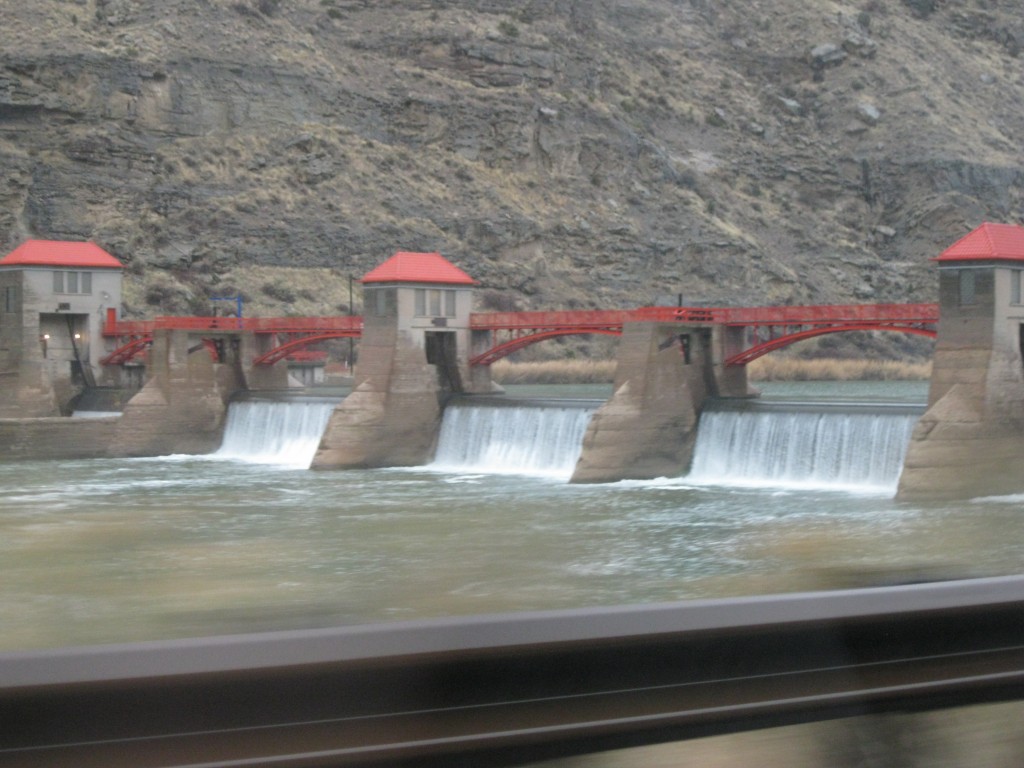 A section of the Roller Dam is seen from I-70 on Dec. 14, 2014.  The dam diverts irrigation water from the Colorado River to the Grand Valley.  The Palisade Historical Society will mark the 100th anniversary of the dam with an all-day party on Saturday June 27 at the Palisade Community Center.