A variance request to build a 6-ft high fence around some parts of the Robert Frank Woodburn property at 393 W. 4th Street in Palisade was debated at the most recent meeting of the Board of Trustees on Tuesday, January 28. Although the Land Development Code (LDC) specifies that residential fences that face streetside should be no higher than 4 feet, Mr. Woodburn argued that the encroachment of new sidewalks, while they are welcome, has also brought privacy and security problems to the residents in the home.

Although the house was built in 1904 and owned by the Woodburn family since 1944, the property has changed somewhat over the past 100 years. Woodburn has spent the past year remodeling the home while at the same time the Town of Palisade extended new sidewalks along Iowa Ave which are now very close to the side of the home. Photos were provided to illustrate how close the sidewalk is to the side of the home. During the remodel, new egress windows were installed in the bedrooms along the Iowa Ave. wall, and due to the required size of the windows to meet the fire code, pedestrians walking down the sidewalk now look right into the bedrooms. There is now less than four feet between the wall of the home and the sidewalk along Iowa Ave.  Mr. Woodburn pointed out the possibility of injury to pedestrians as well as to his windows since the windows open outward and nearly reach the sidewalk when opened. There were previously shrubs along the Iowa Ave. side of the home before the sidewalk was installed but Woodburn explained that replanting shrubs there now would cause problems with the new sidewalk. The previous version of the home had smaller, higher windows and there had been no foot traffic past them. 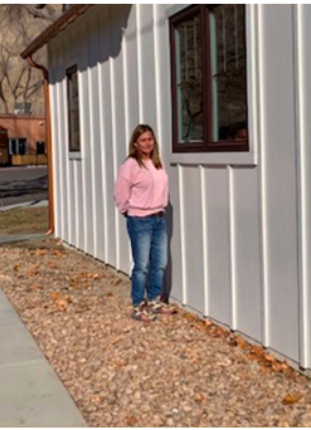 The newly remodeled side of the house alongside the new sidewalk on Iowa Ave.

Public Comment: Tommy Clark – 358 W. 5th St – parks in back of her house, off the alley; feels that the higher fence would impede visibility at the alley entrance to Iowa Ave, and at a high traffic corner particularly with the new business on the opposite corner from the Woodburn home.  Serena Norsworthy – 411 W. 4th St. – is concerned with the speed of traffic around this corner, suggested the higher fence be allowed for part of the side yard, but a lower fence where visibility is limited.

All Trustees agreed that this was the correct use for a variance to the LDC, since the circumstances of a new sidewalk, and a remodeled home that required larger windows left the property owner with a problem. Community Development Director Allyson Shellhorn also pointed out that the width of the garage and visibility due to the parking area in front of it meets the requirements for a ‘sight corner’. The variance was approved unanimously.

Trustees also voted to direct a question on the April ballot asking whether to cease publishing Town expenditures in the newspaper and make them available at Town Hall or online on the Town’s website. Town Clerk Lindsey Chitwood informed Trustees that the Town currently spent about $700 per year to publish the expenditures in the Daily Sentinel. Trustees Bonds, Somerville, Granat, Mikolai and L’Hommedieu voted to approve the ballot question with Thea Chase and Robynn Sundermeier voting to leave the publishing as it is.

Parks, Recreation and Events Director Troy Ward announced the scheduling of a new event on the Palisade calendar. September 26 and 27 will see the Palisade Art Festival in Memorial Park. Put on by Breckenridge artist Dick Cunningham and his daughter Tina, the juried art festival will extend the summer season through the end of September.

The next meeting of the Palisade Board of Trustees will be Tuesday, February 11, 2020 at 6:00 p.m. in the meeting room of the Civic Center at 341 W. 7th Street. Public is encouraged to attend.