Enstrom Candies Legend sculpture to be unveiled on Sept. 26

Home•Enstrom Candies Legend sculpture to be unveiled on Sept. 26

Enstrom Candies Legend sculpture to be unveiled on Sept. 26

On  Friday, September 26th, at 5:30 p.m., the eighth sculpture commissioned by the Legends of the Grand Valley Committee is to be unveiled at the corner of 7th and Main Street in Grand Junction.

The eighth legend is a larger than life sculpture of Chet and Vernie Enstrom –‘Mixing a Legacy.’

The unveiling is free to the public and refreshments will be served.

The sculpture was created from a photograph of both Chet and Vernie as they began their careers in making toffee candy. Today, Enstrom Candies is well-recognized around the country and around the globe for the world famous Almond Toffee developed by Chet.

The Legends of the Grand Valley Committee awarded their commission to sculptor Karen Jobe Templeton of Helper, Utah.  Templeton was to create a life and ¼ sized bronze sculpture depicting Grand Junction businessman and candy maker, Chet Enstrom, and his wife Vernie.

Chet was the founder of Enstrom Candies, a community leader, and a Colorado State Senator.  Vernie played a key role in developing the business, and was a very active community leader. 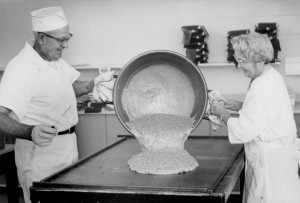 The sculpture will be located at the southeast corner of 7th & Main Street, east of the Avalon Theatre.  As an award-winning portrait sculptor, Karen specializes in portraiture, bas relief, and monumental sculpture of adults, children and animals.

The website states:  “Chet Enstrom pursued his favorite hobby; handcrafting various confections. His specialty was almond toffee, and he experimented at night and on weekends, brewing up small batches of this hard-to-make treat as a gift for family and friends.

“By 1960, his almond toffee had begun to develop a reputation and, at the urging of those early gift-recipients, Chet founded Enstrom Candies. Chet and Vernie planned to make their new “Candy Kitchen” a mom-and-pop operation, but the orders kept flooding in.

“By 1965, Enstrom was shipping almond toffee worldwide and Chet sold the business to his son and daughter-in-law, Emil and Mary Enstrom, so he could pursue a political career in the Colorado State Senate.

“Today, Enstrom Candies remains a family business. Jamee (daughter of Emil and Mary) and Doug Simons oversee the operation of the “Candy Kitchen” and retail stores in Grand Junction, Colorado, where every batch of traditional almond toffee is still made by hand with only the finest, freshest ingredients,” the website concludes.

The Legends of the Grand Valley Committee is an all-volunteer group of local citizens who have come together to support bringing sculpture projects to life, ones that recognize and preserve the legacy of historically significant men and women through ‘story sculptures.’

The sculptures are all integrated into the Art on the Corner collection and together create a “walking tour of history” in the downtown area.