Palisade Mayor Roger Granat was one of the officials on Saturday, May 20, to fire the “first shot” at a well-attended ceremony marking the start of the development of the Cameo Shooting & Education Complex east of Palisade.

Full development of the complex by Colorado Parks and Wildlife over several years on the nearly 2,000 acre site is intended to spur economic development in Palisade, the area, and western Colorado.

Purchase of the land was reported to have been a six year process of negotiations among the town, Xcel Energy, and Snowcap Coal Company. The site is the former location of Cameo, a coal mining town.

The ceremonies took place under tents on a brisk spring morning, surrounded by rocky cliffs and by mountains framing a view of a Grand Mesa, white with new snow and green with spring growth.

At the ceremony, Gov. John Hickenlooper spoke about the economic potential of the development as a world class shooting complex as part of the outdoor recreation industry in Colorado. Gov. Hickenlooper noted that May 20 is the first Colorado Public Lands Day. He marked the day at other events in the Grand Valley. One speaker said more than one-third of Colorado is public land. 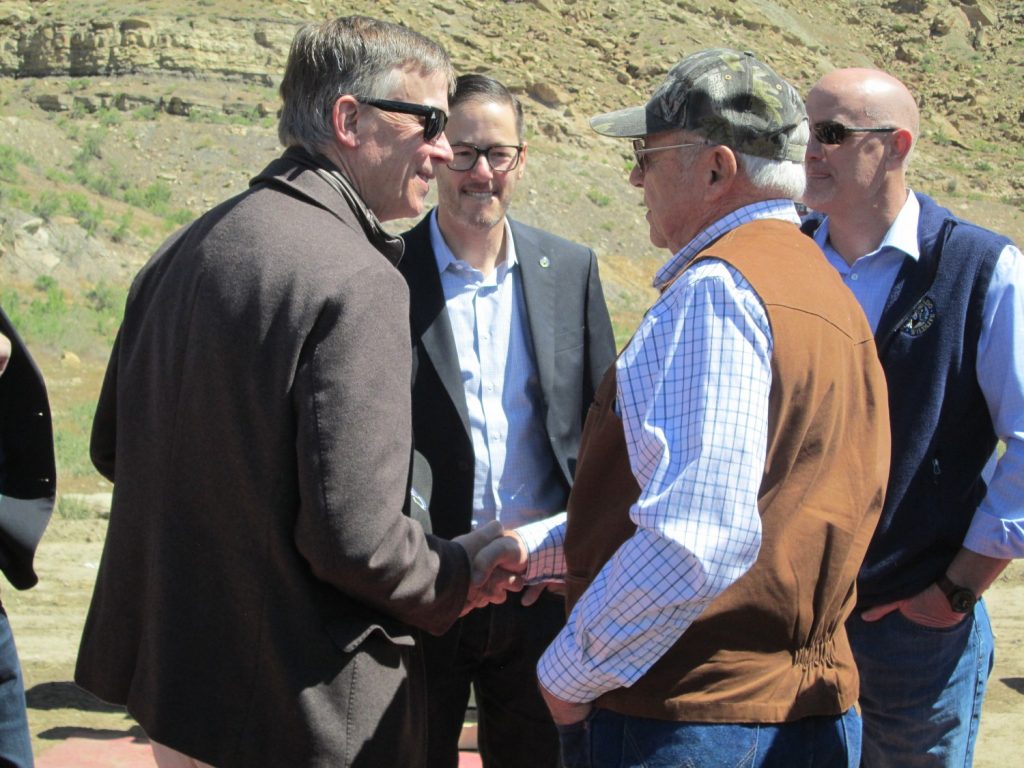 Colorado Parks and Wildlife describes the new complex as “much more than just another place to safely shoot rifles, pistols, archery and shotguns. It will also be an educational and training facility, where kids can learn about the safe use of firearms, and law enforcement can sharpen their skills.

“The complex will be a top destination for people from all over the world to participate in organized shooting competition,” parks and wildlife adds. It notes that when complete the complex will attract 50,000 visitors annually, and generate year-round community business activity.

JT Romatzke, area wildlife manager for parks and wildlife in Grand Junction, said in an announcement, “It will take several years before we see the full potential of … the complex.., but in the meantime, we will work to provide (temporary shooting stations) for shooters to practice and sight-in their firearms.”

At the ceremony, Mayor Granat was presented a cake for his 75th birthday. One speaker drew laughter when he joked that the cake might be used for a target. 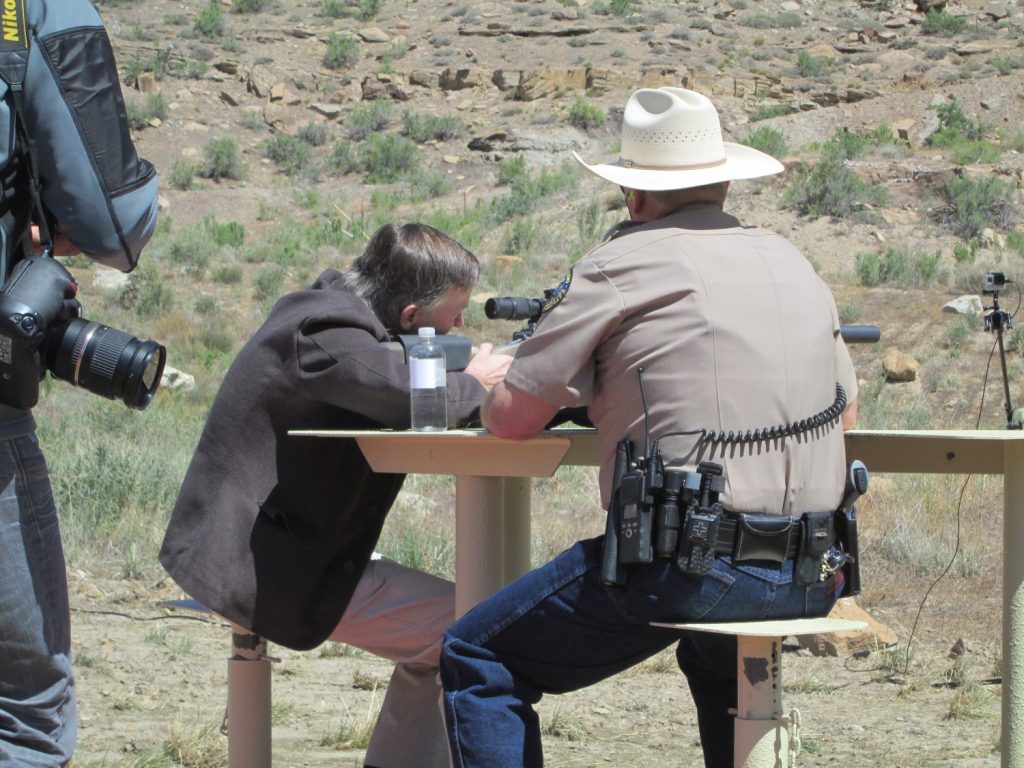 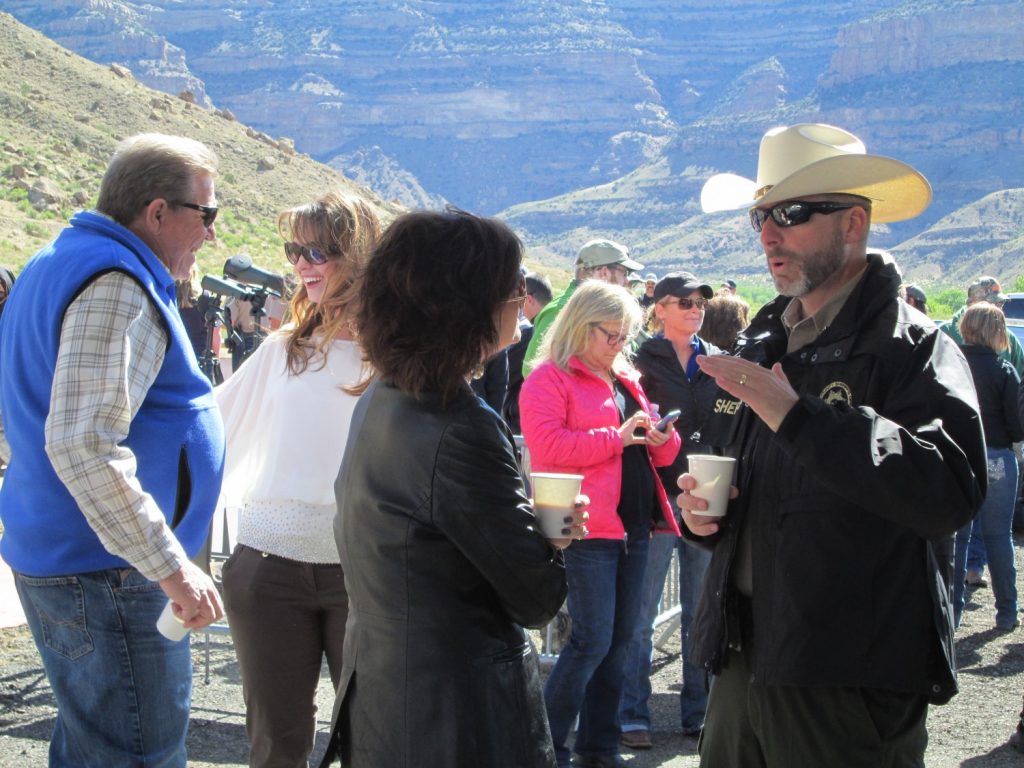 THE CROWD ATTENDING THE CEREMONY HAD TIME TO VISIT WHILE WAITING FOR GOV. HICKENLOOKPER AND STAFF AFTER THEY FLEW TO GRAND JUNCTION. THE CEREMONY WAS WELL-ATTENDED. 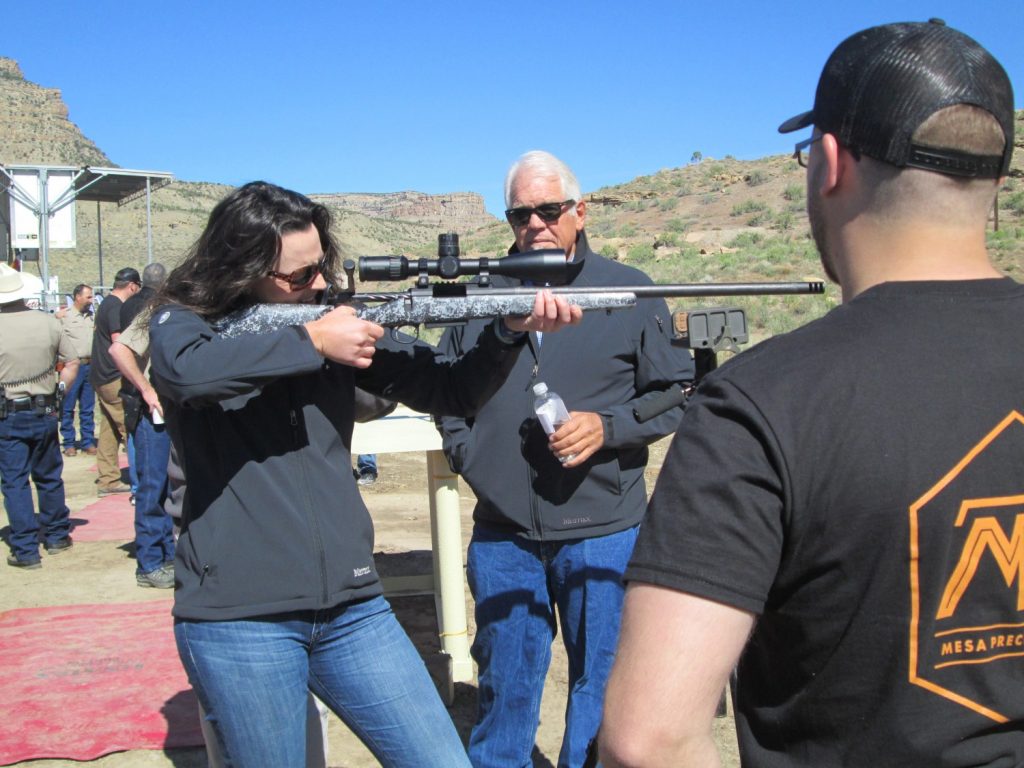 VISITORS TO THE CEREMONY TOOK THE OPPORTUNITY TO GET THE FEEL OF THE RIFLES USED FOR THE FIRST SHOT. 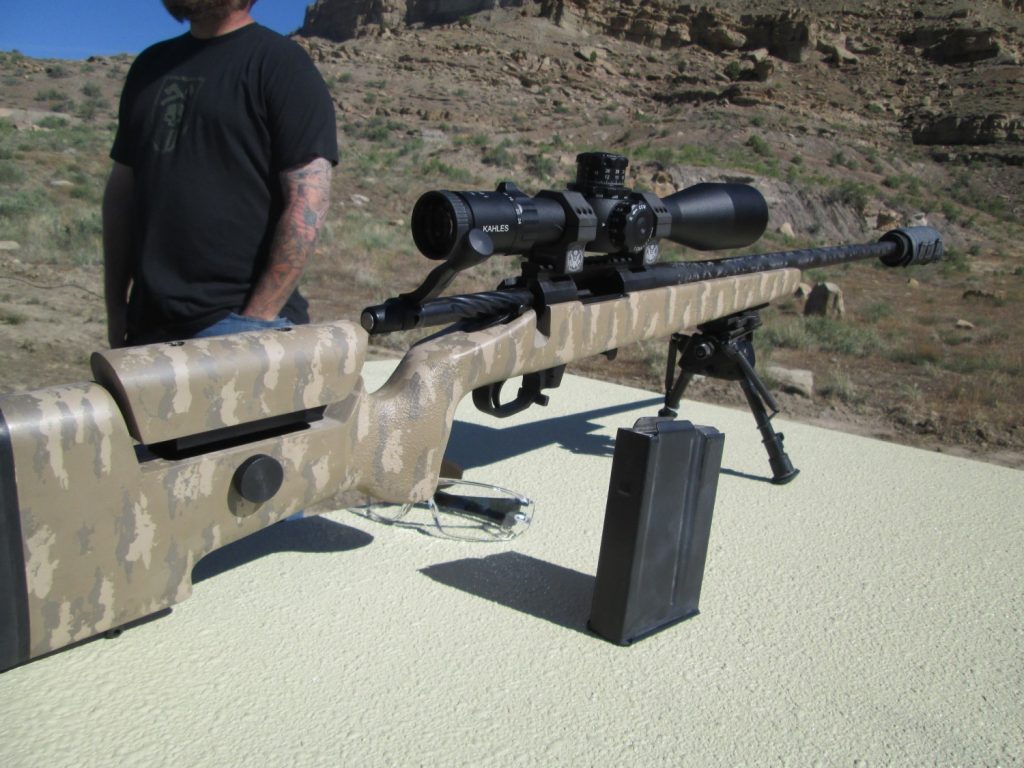 THE RIFLES USED FOR THE CEREMONY WERE PROVIDED BY MESA PRECISION ARMS, GRAND JUNCTION. THE LONG RANGE RIFLES ARE SOLD LOCALLY AND NATIONALLY, JOHN HAKES, OF THE COMPANY, SAID. 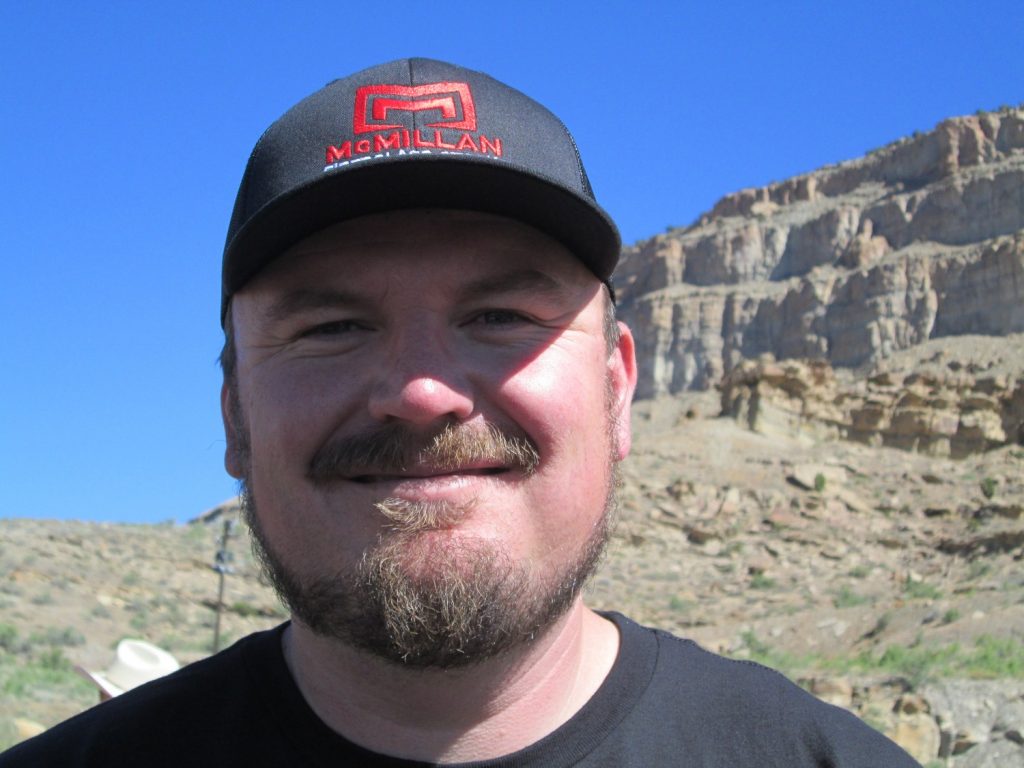 JOHN HAKES OF MESA PRECISION ARMS SAID EACH RIFLE WEIGHS AROUND 11 POUNDS. THE BARREL IS STAINLESS STEEL AND THE STOCK IS FIBERGLASS. HAKES SAID HIS COMPANY WILL COORDINATE WITH COLORADO PARKS AND WILDLIFE IN OPERATING AND PROVIDING TRAINING AT THE LONG RANGE COURSE AT THE COMPLEX. 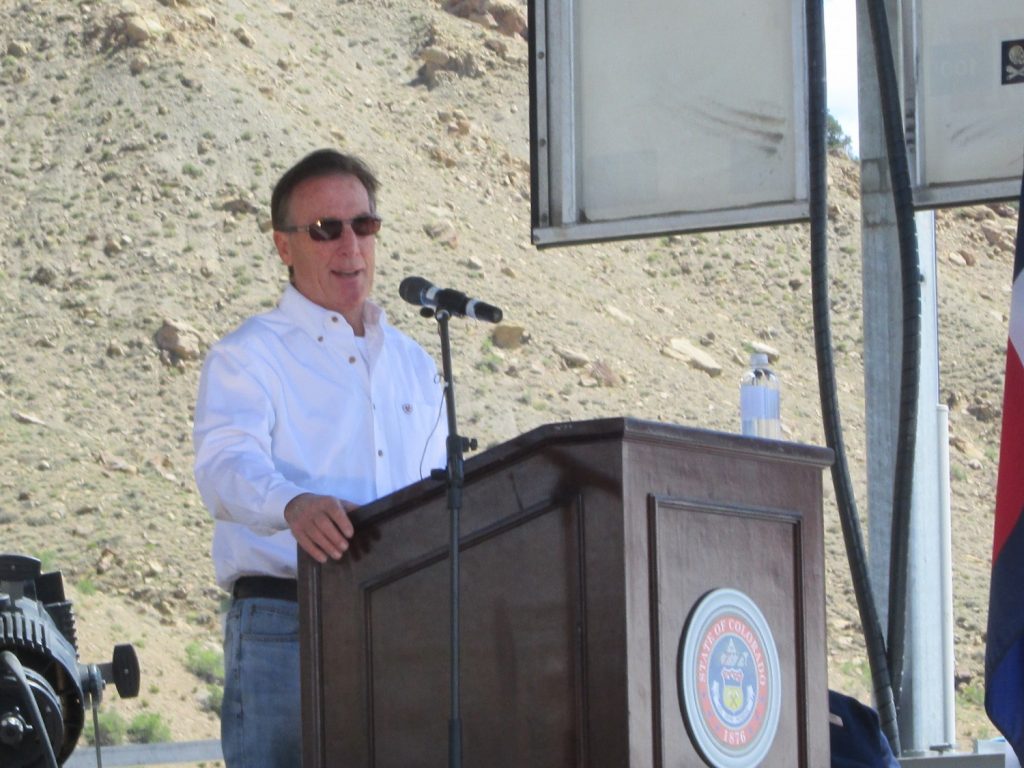 SCOTT MCINNIS, CHAIR OF THE MESA COUNTY COMMISSIONERS, WAS ONE OF THE SPEAKERS AT THE CEREMONY. ALSO ATTENDING WAS COMMISSIONER JOHN JUSTMAN. 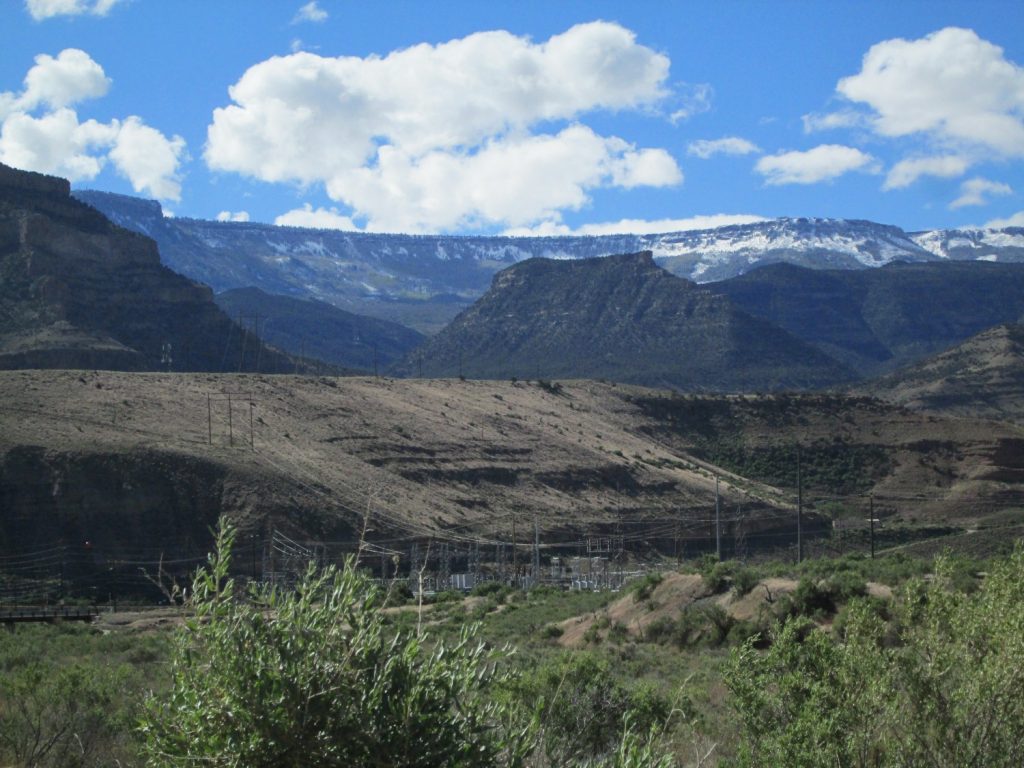 THE CEREMONIES TOOK PLACE UNDER TENTS ON A BRISK SPRING MORNING, SURROUNDED BY ROCKY CLIFFS AND MOUNTAINS FRAMING A VIEW OF THE GRAND MESA, WHITE WITH NEW SNOW AND GREEN WITH SPRING GROWTH.