While I don’t have the voice or the comedic talent of Robin Williams to make that title resonate, I definitely have the enthusiasm, especially when it comes to the subject of our little piece of paradise here in Palisade. With the clock about to spring forward tonight, I thought it might be a good opportunity to get back into the ‘spring’ of things myself and do a little bit of ruminating again on life in Palisade.

It’s been a couple of years of changes for me… losing a parent, becoming a parent to my remaining parent, becoming a mother-in-law (EEK!), moving into a very ‘tiny home,’ beginning a whole new collie family with a (crazed) puppy named Mia, starting a fun new job and continuing my nocturnal travels around Mesa County making sure that everyone gets their Daily dose of Sentinel.

One of the biggest changes in my recent history has been the move into a 30′ trailer to begin life as a Camp Host at the brand-new Palisade Basecamp RV Resort. Bart, Brooke, Brandi and Keith have done a great job developing a beautiful RV park with lots of amenities and some of the most stunning views this side of Moab. Being right at the entrance to DeBeque Canyon means that the ‘Million Dollar Breeze’ was an occasional visitor to the park this winter, so I’ve learned that if I want to leave something outside my trailer, like my little car, I need to tie it down! Just joking, of course. My car is actually just heavy enough to stay where I tell it to stay, but some of my other belongings have seen airtime. We’ve also had some beautiful full-moon nights over the last few months and dozens of incredible sunsets. I feel so lucky to call this place home now, the location itself is a promotion for Palisade. Sitting amid the Bookcliffs, the Grand Mesa and Buzzard’s Roost, surrounded by orchards, vineyards and the Colorado River, a visiting camper could not help but be impressed. I’m hoping like crazy that John Sabal will bring his big telescope, Gigantor, out here some dark night because the star-gazing in the darker east end of the valley here is awesome. We seem to be building toward a critical mass of new business and recreational opportunities in Palisade, and I know that here at Palisade Basecamp, we’re ready to get the season rolling! 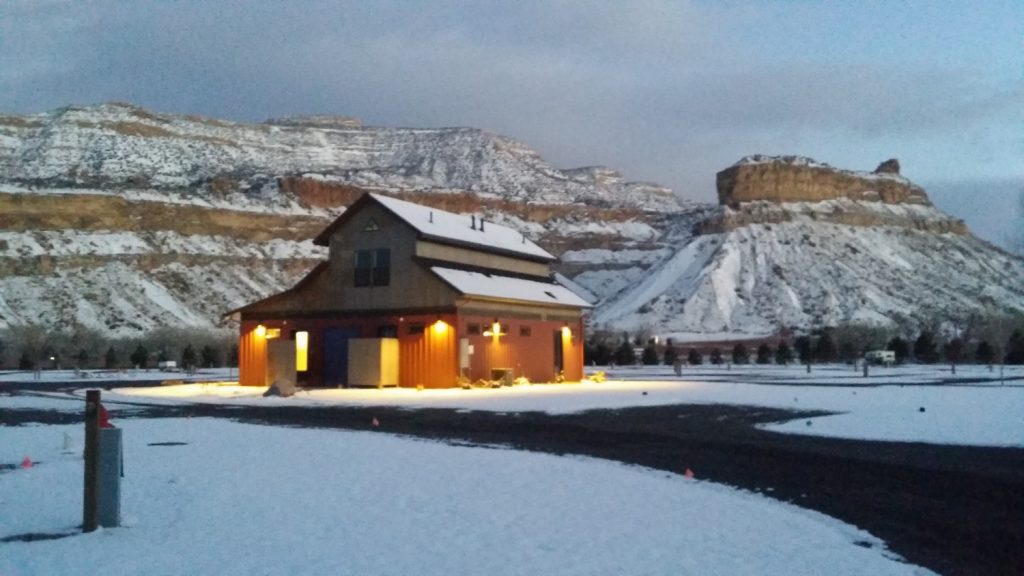 A recent snow made the Basecamp views even prettier, with the new ShowerHouse in the center of the RV park.

Now, a few words on the downsizing that was necessary to move from a fully furnished two-bedroom house to a 30′ home on wheels… Holy C–p!!! OMG!!! What the he–??? There, a few well-chosen words. With punctuation. I ended up ‘downsizing’ into three large storage units…plus 30 ft. trailer… hmmm. Downsize??? Garage sale???

I spent a couple of hours this morning at the Candidate Forum sponsored by the Palisade Chamber of Commerce. The purpose was to enable us to question the candidates running for the four seats on the Board of Trustees that are coming up for election in April. The surprisingly large turnout was a testament to the importance of the upcoming election and the current interest in local goings-on. I would like to urge all registered voters to participate and vote for the four candidates that most closely represent the points of view that you would like to see expressed by the Board. Please don’t give up the opportunity to be part of the process.

An interesting question asked of the candidates was: Would they be more influenced by Palisade’s written codes (the Land Development Code (LDC), the Municipal Code) or by the opinions and public comments made by interested citizens?

As a current member of Palisade’s Planning Commission, I am questioned frequently by citizens who don’t understand how we can approve an ordinance or variance in the case when many citizens show up to a meeting to protest the same. Their usual questions are “Why isn’t the code being followed?”, or “Why don’t we do as the protesting citizens want?”, or “Why is a variance even being considered?” The thing to remember here is that if an applicant has complied with all the provisions of either the LDC or the Municipal Code, there is really no legitimate way to refuse an application, regardless of anyone’s feelings on the subject of the application. Also, both codes have provisions in them for making changes to the codes, commonly known as variances. Many citizens argue that the codes should be followed without question, failing to realize that the process of applying for a variance in the code is also a well-defined and codified process. A variance is a way to be able to apply a more creative solution to a particular problem. I’m not saying that variances should always be granted, only that they are a legitimate and necessary part of the entire process.

There was also an interesting point made that the Board is a team, and all decisions are made by those present at each meeting. Candidates should expect to read, process and digest the information in their packets every two weeks before the meeting, and should be prepared to discuss and decide on issues at each meeting. Very rarely are issues tabled for future consideration, normally decisions are made at every meeting on the issues on that week’s agenda, based on the information presented at the meeting and in the packet. Often, the issue is of a nature that Trustees are not allowed (by law) to speak with the citizens about the issue (Google: Ex-parte contact). Speaking from experience, making important decisions this way is harder than you’d think!

The best way to really know what is going on in your town is to participate a little bit. The Town’s business is done at the Trustee meetings, so the people that continue to spread rumors that everything happens in secret are very simply misinformed. The information packets are available online or at Town Hall a couple of days before each meeting, and there is detailed financial information in each and every packet so you can see every check that is written, and line items for ALL the various sources of revenue. If it is just not possible to attend any Trustee meetings, at least look through the meeting packets and arm yourself with real information, not Facebook posts from uninformed and often reactionary sources.

This is also why I never get off my soapbox about attendance at Trustee meetings. If you don’t come to the meetings, you miss the opportunity to know the Town’s business. This is the only time that the Trustees are even allowed to all be together, they don’t meet between regularly scheduled Trustee meetings (on the second and fourth Tuesday of each month). I heard a candidate say today that if there is poor attendance at meetings, that the Board must be doing something right. I realize that he meant that if no one came, that no one was upset about anything. Nice thought, but I don’t agree. In this town, at least, people seem to get on Facebook instead, as if that is real news (!). Then they think, from reading the usually nasty gossip, that they know what is going on. I have yet to see a truly factual, informative Facebook post about anything local, it’s mostly speculation and gossip. A Board that operates with no one watching is actually a very scary thought, the best way to protect against any malfeasance is to pay attention yourself! And so we come full circle. Reading the packets and attending Trustee and Planning Commission meetings IS your way, as a citizen, to keep an eye on your elected reps.

Ballots will be mailed on March 12, and can be dropped off in the ballot box at Town Hall, 175 E. 3rd Street, Monday through Friday from 8:30am – 4:30pm. Tuesday, April 3 is the last day to submit your ballot and Town Hall will be open from 7am – 7pm that day only to facilitate ballot dropoff. Please participate!