Hollis “Holly” Reed passed away at age 90 on Jan. 25. Her family invited local friends to an informal celebration of her life on Sunday Feb. 22, 2015, at her home, 3553 G. Road, Palisade.
Many came to gather, to share their memories, and to enjoy the photos assembled of Holly’s very interesting life, spanning many continents and the nine decades.
In April the family will be observing a more traditional celebration in Pennsylvania with long-time friends and family, according to her daughter Lorna Reed.
“As mother was the quintessential ‘people person,’” Lorna explained, “there are people she may have touched and of whom we may not be aware, so please let others know about her passing on Jan. 25 and the memorial.”

At age 84, Holly Reed moved to Palisade in 2009 to live with her daughter. She was not the type of woman to sit at home and sit around in her mature years.
All her life she had been active and curious, and she looked at the small town as an adventure, and she never stopped doing what she wanted to do.
Most local people were familiar with Holly’s smiling face and her quiet, yet curious engagement with everyone she met. Few knew the major details of Holly’s life.
“Born in Bryn Mawr, Pennsylvania, she grew up in Gladwyne, and attended the Philadelphia Museum School of Industrial Art and the Textile Institute (now the University of the Arts).
“She went to work designing upholstery fabrics, woven on Jacquard looms,” wrote her daughter Lorna Reed, in the obituary that ran in the Daily Sentinel on Jan. 26 after Holly passed away due to complications with pneumonia.
“During World War II, she aided in the war effort, by assembling B-17 instrument gauges.
“In 1948 she married her high school sweetheart, Robert Reed, who served with the Tenth Mountain Infantry, in Italy, and they moved to Vermont, where Bob attended Middlebury College.
“Upon Bob’s graduation they moved to Stuyvesant Town, Manhattan, where their two sons, Curtis and David, were born.
“In 1956, they returned to the Philadelphia Main Line, had a daughter, Lorna, and settled in Berwyn where they raised their children and established deep, lifelong friendships.”
Her daughter’s words told more about Holly’s life than her mother had mentioned during her six years in Palisade.
“Holly began a lifelong career of helping others. She volunteered with the Red Cross in Blood Mobiles and visited and aided returning Viet Nam soldiers at the Valley Forge Military Hospital.
“She enjoyed serving as a period-costumed guide at George Washington’s headquarters at Valley Forge.
“Holly continued her interest in art by creating drawings, paintings, and mosaics; by teaching embroidery, needlepoint, and crewel; and by designing custom pieces and stitchery kits commercially.
“Once the three children left home, Holly became an avid and enthusiastic traveler to countless countries and most of the continents, with many Habitat for Humanity projects in Guatemala, the Balkans, and Nepal.”
This active Senior did enjoy telling her happiness with the town, the people and the activities here in Palisade.
“In 2009, Holly left Pennsylvania’s harsh winters to join Lorna in Palisade, Colorado, where she and Lorna enjoyed local trips to continue her interest in archaeology and early American culture.
“While in Palisade, Holly joined a writing club, a book club, the Daughters of the American Revolution, and a Bible study group at Clifton Christian.
“Perhaps the greatest joy of Holly’s later life came when David’s two children, Paul and Alesandra, were born; she treasured visits from her grandchildren, both of whom had moved to Denver.”

Holly had various names to many people in Palisade.

To her children she will always be Mother and Grandmother.
To her family she was Hollis, but to her friends she was Holly.

The Palisade Writing Group members considered Holly as a sweet, good friend, a stylistic writer, a voracious reader, a world traveler, and a lover of life.

When she joined the Palisade Writers monthly meetings at the library for the first time in 2012, she was sitting at the table looking shy and fragile. After introductions her face lit up with joy and interest in every writer’s stories and the discussion of books and publishing.

They knew so little about her background, but her writings took the listeners back to her childhood neighborhood of Gladwyne, PA, and the events and memories that molded her into the cheerful, adventurous person she became.

Holly Reed wrote every word on every page by hand. She would apologize for not using a typewriter or computer, but when we heard the detailed descriptions of the homes, the actions and memories, the time-era dialogue and jargon, we would beg her to photocopy the pages of elegant handwriting.

“The beautiful elegant cursive lettering just fits the tone and style of the era that she is writing about. You should have the pages copied and published as is,” said Donna Lively, the group’s founder and leader, the only one who saw Holly’s papers.

She would laugh and say, “No, no. This is just my memory.” Yet her words surprised and delighted everyone each time she told of her growing up in the set traditions and social behavior of an “Old Money” society back East.

Holly came to a meeting in mid-2014 and casually stated that she had finished writing her book, “Or at least I think I have said all I can remember.”

She quickly admitted that she was not going to stop writing because she had other topics she wanted to write about.

New writers joined the Palisade Writing Group, and several long-standing members were publishing their books. So the Group decided to host an event to show the community the books being produced by local writers.
In September she was one of the first ones to volunteer to read a section of her Gladwyne memoir at the “Wine and Words” program at the Meadery of the Rockies. 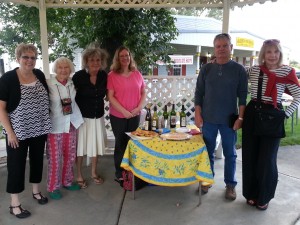 Palisade Writers Donna Lively, Holly Reed, Mary Leonard, Vickie Holt-Knob, Ron Chappell, and Maggie Fellman shared their writing pieces to family and friends  in September were  In January Holly became ill and passed on Jan. 25.
When Maggie Fellman hosted her annual “Bon Voyage” party for the Group in October, Holly was there, encouraging, smiling and talking about life with good writer friends.
That was the last time her writing friends saw her. She became ill and couldn’t make it to the meetings at the library. The cold weather that swept through the valley kept Holly home-bound until her health turned to pneumonia through the holidays.
It was a shock to all when Holly went into the nursing home and passed away Jan. 25. She had lived so many experiences from Pennsylvania to Palisade, through World War II, Korea, Vietnam, up to the present, and traveling the world by herself with no mishaps.
Lorna ended her mother’s obituary with these final paragraphs: “Holly was preceded in death by her parents, Doris E. Fellows and Cecil P. Harvey, and her husband, Robert H. Reed. She is survived by her brother, Andrew C. Harvey, and his wife, Lynn, of Waltham, Massachusetts; Her children Curtis H., David W., and Lorna V.S. Reed; and her two grandchildren, Paul Martin Reed, and Alesandra Fay Reed.

Future celebrations of Holly’s life will be held in Colorado and Pennsylvania.
Holly will be fondly remembered and sadly missed.”

Holly Reed will be missed, but never forgotten by loving family and friends, especially her Palisade Writers members.

“I was privileged to know Holly through the Palisade writer’s group where she was a great favorite. She exuded “heart” and spirit both in her writing and in her unfailing thoughtfulness toward her fellow writers and their work. We have lost a good friend, whose wisdom and kindness will be missed. I expect we will forever be the better for having known her.” –Ron Chappell, Palisade CO
##
“I met Holly in 2013 in the Palisade Writers Group. She inspired me with her beautiful writing, her sharp mind and her sparkling eyes. She was always gracious. Today I was thinking about her and why she was such great company, and I remembered her positivity – I never heard Holly complain about anything.
I vow to try to be more like you Holly. Rest in peace dear friend. “ ~ Sharon Heller, Palisade
##
Conocimos a Holli para constatar que la alegria, la dulzura y el elixir de la vida viven en cada instante, no importa la edad y que como la vida misma, nacemos y vivimos hasta el final con un corazón lleno de entusiasmo y una sonrisa a flor de piel. Gracias por todo tu entusiasmo Holli!!
~ Claudia Scritchfield, Colombia and Palisade
##
“I had the pleasure to meet Holly through the Palisade Writers Group. I will miss her friendly smile and wonderful stories she wrote. In the autumn of 2014 the writers group held their first “Words & Wine” event, in which Holly read a couple pages of her work. I hold fond and wonderful memories of her.
Thank you for shining light into my world, you will be missed.”
— Unsigned