Jessica Bonds was formally approved by a vote of the Palisade Board of Trustees on April 24 to fill the seat left vacant by the unexpected, forced resignation of Jesse Loughman, top vote-getter in April’s municipal election. Loughman was notified hours after being sworn in as a Trustee on April 10 that as owner of the Colorado Alternative Healthcare Center and the Colorado Weedery, his connection to the industry made him ineligible to serve on any governmental boards or committees.

Trustee Susan L’Hommedieu retained her seat in the April election, and new trustees Jamie Somerville and Greg Mikolai were also elected along with Loughman. With the fifth highest vote count, Jessica Bonds was the logical choice to fill Loughman’s seat and was formally nominated by Mikolai and confirmed by the new Board at Tuesday’s meeting. Present at the meeting, Bonds was offered the chance to be sworn in and take a seat on the Board immediately, and she did, giving the Board a quorum. L’Hommedieu was absent from Tuesday’s meeting of the Board, as was Thea Chase, making Bond’s participation particularly helpful.

New Trustee Greg Mikolai was nominated by Mayor Granat to the position of Mayor pro tem and was approved unanimously by other Board members.

With the search for a Town Administrator narrowed to two candidates last week, Janet Hawkinson and Mark Campbell, Trustees offered their opinions on the process and the two final candidates. Mayor Roger Granat made a motion to begin contract negotiations with Hawkinson, seconded by Trustee Somerville. After a rather lengthy interview process last weekend, Board members found it tough to choose between the two, and zeroed in on Hawkinson’s incredible enthusiasm and interest in Palisade as the deciding factor. Town Treasurer Joe Vlach will begin the negotiation process with Hawkinson immediately. 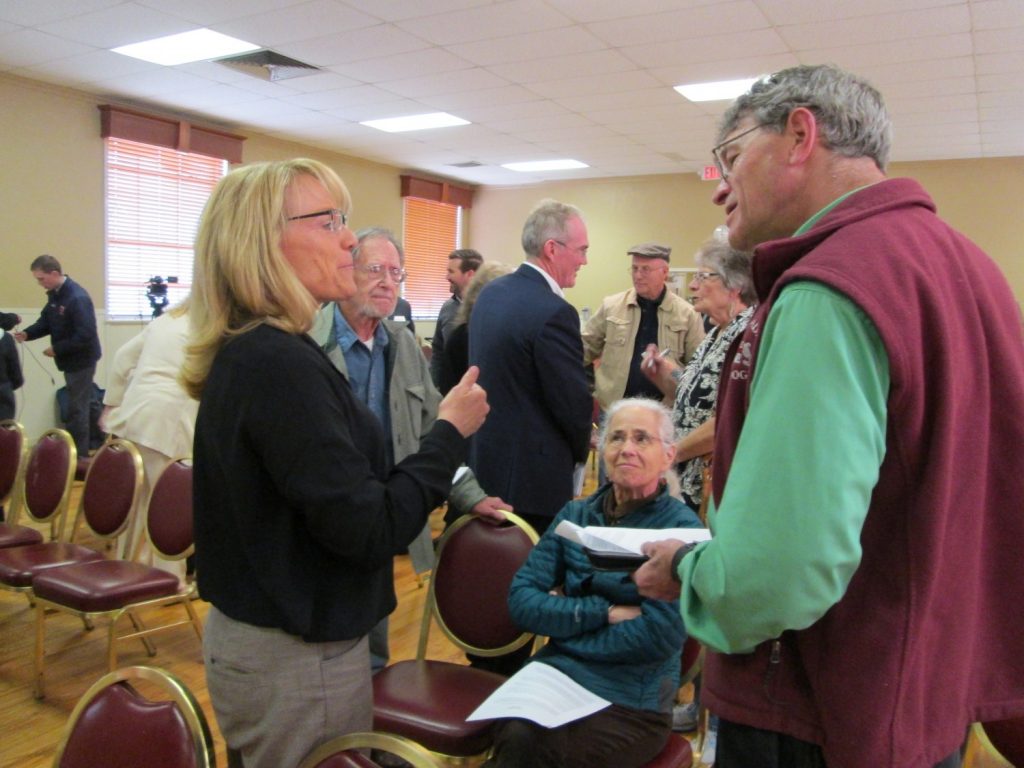 Candidate Janet Hawkinson talks with David Miller of Alpine Bank, and a Palisade resident at last Friday’s Meet and Greet for the candidates for the position of Town Administrator.

Trustees were asked to consider a proposal to change the name of Rodeo Road to Cresthaven Avenue. The stretch of pavement is located at the just north of and parallel to Riverbend Park, intersecting with Vineyard, Elberta, Montclair and Shiraz. There was general agreement to the proposal, but Fire Chief Richard Rupp explained that the use of ‘Avenue’ suggested a street going in the north-south direction, where Rodeo Road is an east-west throughfare. Since the road will be the south border of the new ‘Cresthaven Acres’ subdivision, the name change seemed appropriate to Trustees. Since there are currently no residents at all along Rodeo Road, there will be no need to send out notices of the name change. Trustees also agreed that any costs of replacing street signs or other official designations will be borne by the developer.

There was a short discussion on amending the Municipal Code regarding the number of members on the Parks and Recreation Board. Although the Code states that there should be nine members, it was not clear whether the ex-officio member of the Board of Trustees that sits on the Parks and Rec Board should be considered as one of the nine. It had been decided at the April 10 meeting of the Trustees that there would be nine official voting members with the ex-officio being a non-voting tenth member with the responsibility to report back to Trustees on PRAB actions. The decision left a vacancy on the Board and since there had been one other applicant for the recently filled seats on the Board, it was decided to interview him as an applicant for the new ninth seat. Bill Alderman was then questioned by the Board of Trustees and approved for immediate inclusion on the Parks and Recreation Board.

The next meeting of the Palisade Board of Trustees will be held on Tuesday, May 8 in the community meeting room at 341 West 7th Street at 6 p.m. Meetings are open to the public and agendas are posted on the town website and at Town Hall at least 24 hours prior to each meeting.