The scent of lavender was wafting heavy in the air passing by Memorial Park last Saturday as hundreds of lavender lovers descended on the Palisade area to be treated to all the latest products and developments in the field of lavender cultivation. 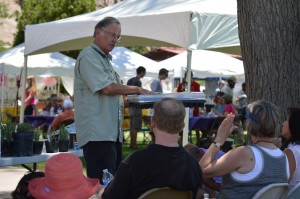 Dr. Curtis Swift, local lavender grower and lead researcher on the ongoing Lavender Assoc. of Western Colorado study, detailed how to create the best growing conditions for your lavender plants. 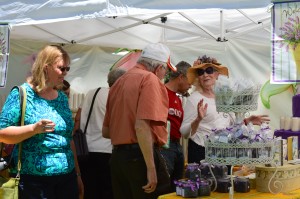 The shoppers were sniffing and sampling, slathering on lotions and trying household cleaning potions.

Most of the area’s lavender farms were also open on Sunday for self-guided touring as our weekend guests took in the sights and flavors of the Palisade area. Wineries and tasting rooms also captured some of the lavender crowd, and the Fruit & Wine Byway was shared with lots of bicycle riders, making for a busy weekend at the east end of the Grand Valley. 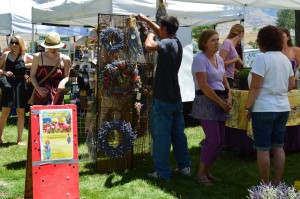 Cultivation of lavender on the Western Slope of Colorado has been very successful, due to a combination of climate, elevation and dedicated growers, making the area one of the country’s hottest destinations for lavender growers and wanna-be’s. There was an acoustic duo, David and Tamara Hauze, adding beautiful vocal vibes to a near-sensory overload. Fantastic food vendors set up in the parking lot of the park, and the folks from St. Kathryn Cellars shared tastes of their lavender steeped Riesling. 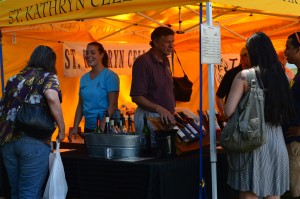 Lavender buds flavor the Riesling from St. Kathryn Cellars, and they brought lots of other fruit based wines to sample as well. 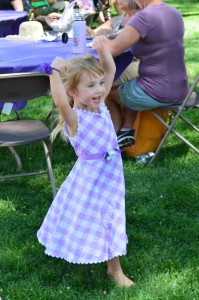 Looking lovely in lavender, Claire Bailey of Delta twirls and dances to the music of David and Tamara Hauze.

The high quality of medicinal lavender oils produced on the Western Slope have given rise to a number of local producers of bath and home products. Many local growers plant both medicinal and culinary varieties of the plants, and have starter plants for sale as well. 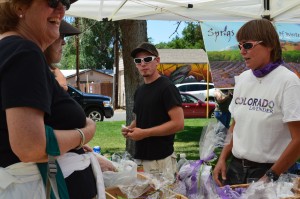 Ruth Elkins of Sprigs & Sprouts Lavender Farm, shows a few of the products that can be made with lavender as a base ingredient.

Lida Lafferty, author of the “Spike It with Lavender” cookbook, was available throughout day in the Festival Tent, answering questions and teaching about culinary uses of the herb. She even showed how to make a ‘Lavender Firefly’ by sticking culinary lavender buds into marshmallows before roasting them over the fire. The buds ignite for a few seconds, and infuse the marshmallow with lavender flavor as well. 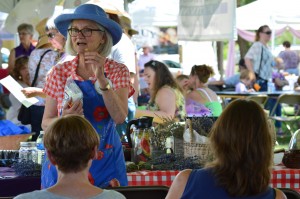 Lida Lafferty, author of the “Spike It with Lavender” cookbook, demonstrates how to make ‘Lavender Fireflies.’