Town Administrator Rich Sales began the meeting by announcing the dedication of the Palisade Community Garden to take place on Wednesday, Sept. 10, at 6 p.m. at the garden. Recreation and Events Coordinator Sarah Brooks put together a short program and the giant beehive was to be officially donated to the garden from the Honeybee Festival. It currently serves as a shelter and play house for children while they are visiting the garden.

Sales also announced that tickets for WineFest, Sept. 19, 20, and 21 are available to interested board members. A big crowd is expected for the annual event to be held in Riverbend Park, and for the satellite events held at area wineries, restaurants and the Wine Country Inn.

Two ordinances and two resolutions were considered before being passed unanimously by trustees.

On the subject of medicinal marijuana, trustees agreed to reduce by ordinance the normally applied occupation tax of $5 per transaction when the patient is state-certified to be ‘low-income.’ The state-issued ID needed to purchase medicinal marijuana is unmistakably marked when the patient is exempted from paying state taxes, and Mayor Pro-tem David Edwards proposed that the courtesy be extended to include the town’s occupation tax.

Jesse Loughman, owner of Colorado Alternative Health Care in Palisade, informed the trustees that the percentage of tax-exempt patients was very low overall, but that the ones that were exempted would really appreciate the trustees’ consideration. 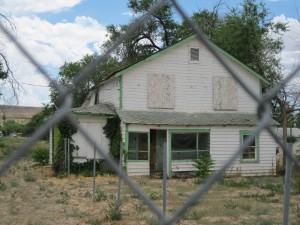 This house has now been demolished, also an objective of the town’s plan for the Iowa Avenue property purchase and sale.   Photo by Bill Hoffmann

The second ordinance passed involved annexation of the strip of property running south from 8th Street just east of the former Packing Shed restaurant. The strip is part of a land purchase made by trustees in July. Part of the original purchase that included an A-frame home was put up for sale, but the strip that runs from 8th Street along the west border of the Taylor Elementary Schoolyard might be used for a walkway between 8th Street and Riverbend Park. This would improve pedestrian and bicycle access to the park, especially desirable during festivals when the traffic down Iowa and Logan Streets is particularly heavy. It is also hoped that the property can be used by School District 51 to construct a safer route to school for at least some of the students than the route that currently exists.

A resolution was approved to give the Town Administrator the authority to negotiate the sale of the A-frame home and property at 909 ½  and 933 Iowa, part of the property purchase mentioned above. Administrator Sales was authorized to close the sale for a price of not more than $250,000 or best offer. Sales informed trustees that a buyer has been found, and has already submitted a letter of loan approval to finance the purchase. Closing is tentatively scheduled for Nov. 4, assuming successful financing. Sales requested a 10’ easement on the south side of the property for the next two years, to give the town time to consider alternate uses and access to Taylor Elementary and Riverbend Park.

Sales also thanked John Sabal of Fruit & Wine Real Estate for his efforts in putting the real estate deals together in such an efficient manner.

The final resolution authorized the town to negotiate with Dirtworks Construction for a reduced scope for the town’s Second Street Entertainment District Improvement Project, not to exceed $300,000.

The original project, scheduled as part of the Main Street rebuild, now planned for next spring, has been revised to a multi-step plan, with the newly approved portion of the project to include the new 18” water line under the railroad, new sewer line, and sidewalk, curb and gutter along the north side of Second Street. It will also include repaving the street to the same specs as the Main Street project. Public Works Director Frank Watt anticipates that the demolition phase of the entire project will begin next February with completion scheduled before the Bluegrass Festival in June.

In other business, trustees voted unanimously to accept that all current members of the Riverfront Commission to retain their seats for another term, since all had expressed the desire to remain on the commission.

Treasurer Joe Vlach reported that the Cen-Ten Committee will be holding a Costume Ball on Saturday, Nov. 1, at the Wine Country Inn. Costumes of any period of Palisade history are encouraged, and there will be live music and appetizers as well as a cash bar. Tickets are $15 per person or $20 per couple.

Town Administrator Sales also announced that the property upon which the I-70 Fruitstand is located is now on the market. There is approximately 10 acres of usable land included in the parcel for sale. It is rumored that Subway is looking at a location south of I-70, and also that a gas station / “Heritage Center” is being discussed as a possible use for the property.

Sales also updated trustees with information that the purchase of land for the shooting complex is now under way, and that Mayor Granat and Trustee Robynn Sundermeier will both be at the table as observers with Snowcap Coal and Xcel Energy when the deal is being negotiated.

Police Chief Tony Erickson invited all trustees and department heads to spend a day with an officer sometime, to see what their jobs entail on a daily basis, and especially how much computer time and paperwork are involved. He also discussed the upcoming “Shoot – Don’t Shoot” training in December.

Community Development Director Ron Quarles stated that he will be in touch with the owner of the burned out ‘Roadrunner Building’ on the corner of Iowa and Third Streets to find out when they plan to either demolish or rebuild the building.

Trustee Susan L’Hommedieu reported on the latest meeting of the Palisade Chamber of Commerce, announcing that Hilltop will sponsor the Olde Fashioned Christmas this year over the first weekend in December. The Chamber will also be holding it’s monthly Business-After-Hours mixer at the Suncrest Orchard Alpacas on Wednesday, Sept. 17, from 5:30 – 7 p.m.

The next regularly scheduled meeting of the Board of Trustees will be held at the Palisade Civic Center, 341 W. Seventh St., on Tuesday, Sept. 23, at 6 p.m. The agenda will be available on the town website and posted at Town Hall at least 24 hours before the scheduled meeting and all meetings are open to the public.