With this election year getting off to an interesting start, to say the least, the Town of Palisade will also be asking for voter participation in the local Mayoral election in April. Voting will be done by mail-in ballot, with all ballots required to be returned for counting on or before Tuesday, April 5.

Two candidates are vying for the position this spring, current Mayor Roger Granat, and Mayor Pro-Tem David Edwards. The four-year term would be a final term for Mayor Granat, who would then be at his time limit of service, according to state statutes regarding term limits.

“It’s been my pleasure serving the people for the last five and a half years,” says Mayor Roger Granat. “I would appreciate their vote in the upcoming election.”

Granat feels that he still has some contributions left to make, particularly in the area of upcoming economic development, and would still like to be “in there”, as he said in an interview last weekend.

Growing up in a home just east of Palisade, in the area known as the Vinelands, Granat graduated from Palisade High School, as did his twin sister, Ruth and older brother, Gary. Peaches were the family business, and Granat has seen the fruit industry grow and change along with the rest of the local economy.

What would you point to as major accomplishments that have taken place in Palisade during your tenure as mayor?

Granat immediately pointed out that any accomplishments named were accomplished by the entire board, not just by himself. “The obvious ones are the Fire Station and Main Street, we’ve been able to accomplish the controlled burns on the watershed, and we put in the diffuser, saving the town about $9 million that would have been spend laying pipe to connect Palisade to the Clifton treatment facility,” he explained.

He also pointed to the negotiation to purchase additional water from Ruedi Reservoir, giving the town a bit of ‘insurance’. “The thing about water is that it never de-values,” Granat pointed out.

“We’ve completed the sewer line on West 8th, I think that is a good thing,” he continued. The recently completed construction upgraded the homes along West 8th Street from septic systems to the town sewer system.

“And, of course, the big thing is the Cameo shooting complex,” Granat continued, explaining that the effort to build the complex so far has cost the Town of Palisade just two nights in a motel room, as Granat and Town Administrator Rich Sales had to travel to Denver a couple of times to testify before state congressional bodies debating the granting of the funds to build the complex. He believes that the facilliy will be a major economic driver, not just for the Town of Palisade, but for the entire Grand Valley, the entire Western Slope of Colorado. It is something that will draw people in from all over the nation and all over the world.”

“I think we have a very well-functioning administration now, and I take pride in being part of that, putting that in place. Our police department is very well-functioning now, and public works does an excellent job. When you look at the fact that we have never ramped up our employment or had to lay people off, the projects get done, those are the big things.”

“We’ve added a new facility down at the sewer lagoons that allows us to keep from building up near as much sludge in the lagoons, which cuts down on the price of having to go in and clean them as often.”

“We’ve been able to put in a bike skills park, and that was put in with a grant for about $25,000, for the young folks in our community to get out and enjoy. We’ve got plans to re-design the skateboard park and enlarge it, probably taking that entire area for the skateboard park and build a new basketball court, maybe just south of the tennis courts.” The soccer field could be moved further south or reconfigured to play in the east-west direction.

Granat continued, “I think that the medical marijuana shop, regardless of how you feel about it, I think it has been good for the town. They collect a transaction fee that goes to the town on any transaction that is done there.“ This is in place of a sales tax.

“The Brewery is planning on building, I think that is excellent. Any time that you have people starting to build up, it shows that you are getting ready to grow and the thing that is very apparent is the fact that Palisade has got to grow. If we continue to lose businesses, we will continue to lose our sales tax base. When you do that, your services go and then the residents follow. The Distillery is going to enlarge, I think that’s a good thing.”

“People were not real happy about the idea that we were going to get a Dollar General store in town. I think that it is quite apparent that the Dollar General store fits a need. It doesn’t fit everybody’s need, but I watch it every time that I go by, and it seems like it’s busy. Does it compete with our local grocery store? No, because I don’t think that for the people that shop there, the items they get are probably not the big items that they’d get at the grocery store. Compared to Wal-Mart, it’s right here in town.”

“In doing the Main Street project, we were able to put in two ‘smart car’ refueling stations (recharging). The other thing that I think is going to be an improvement for downtown is our public art program. I’m really looking forward to some of the things that are going to be displayed there.” 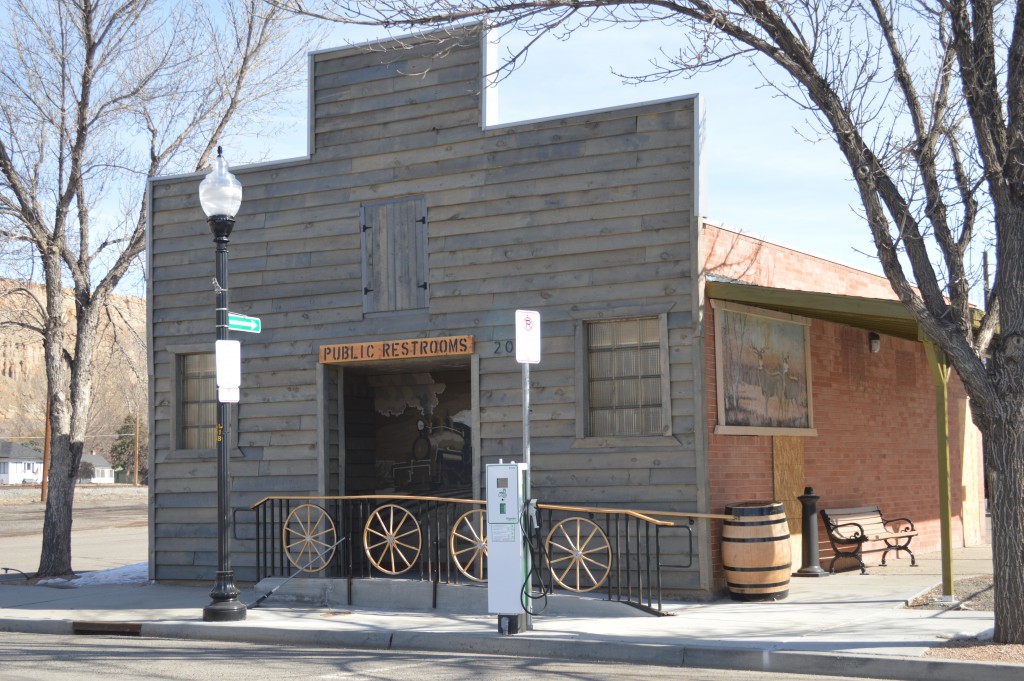 The public restrooms have also been a great addition to the downtown landscape, according to Mayor Granat, and he is especially proud of the ‘smart-car’ recharging station.

What change would you like to see in Palisade?

“We need to be able to offer the young people from the high school, for instance, a place that, at noon, they don’t have to run to Clifton to Arby’s or one of the fast food places down there.”

“We need to start looking at the services that, over the years, the Town of Palisade has lost, and see how we can try to bring some of those services back.”

“One thing that I would like to try, if I am elected, I would like to try to get started, if not completed, I would like to see us have a service center. Mike Coe is not going to complain about having someone here that will change oil in 20 minutes or so. We also need somewhere that we can buy tires or get a flat fixed in Palisade. At the present time, Mike can send a man out to jack your car and change it if you have a spare, but has no ability to fix flats, or provide spares. It wouldn’t have to be huge, a two-bay tire shop with a two-bay oil change. When you look at how many cars and tractors are in our vicinity, we could sure use these services.”

How do you feel about a Home Rule structure when compared to our current status as a Statutory Rule town?

“The town is now getting to the point now, in size and population, that we may need to look at changing from a statutory town to a home rule town. When Palisade was set up in 1904, the population was small enough that it did come in under the ‘statutory’ definition.” This means that Palisade is now governed under the statutes of the State of Colorado.

There are reasons that changing to Home Rule might be to the advantage of the Town. Our town attorney, Ed Sands, has been contacted, and he has sent some information, and we have also received information from the Colorado Municipal League. It would have to come before a vote of the citizens to change from Statutory to Home Rule, in a General Election in November. Granat feels that the trustees need to look at the pros and cons of each type of structure. “Then,” Granat explained, “If we decide that it’s time, we need to set up a good informational campaign to inform the public what the pros and cons are and let them decide.” He continued, “There appear to be some real advantages to Home Rule, and some real disadvantages.”

One difference in the two structures is that under Home Rule, the town could be divided into districts, with representatives elected from each district. The mayor could then either be appointed by the council, or elected by the citizens, or by whatever manner is specified by the Home Rule charter of each town.