Three separate public hearings crowded the agenda of the Palisade Board of Trustees’ first meeting of 2015. With the resignation of Trustee Cody Butters, due to her employment promotion and relocation, one vacancy is open on the board, but all other trustees were present for Tuesday evening’s meeting, January 13, at the Palisade Civic Center, 341 W. 7th Street in Palisade.

Following a public hearing, a Conditional Use Permit (CUP) application for marijuana-infused product manufacturing was approved by all trustees for the Palisade Apothecary, operated by Jesse and Desa Loughman. The Loughmans also operate the Colorado Alternative Healthcare Center at 125 Peach Ave. The CUP is just the first step in a long process of approvals governing the actual infusion manufacturing process itself.

According to the CUP application, Marijuana-infused products for medicinal use include oils, tinctures, salves and creams and delivery systems for the cannabinoids other than the smoking of marijuana.  Medicinal marijuana products are especially beneficial to those patients who are helped by the active ingredients in different strains of marijuana, but who have compromised breathing issues.

Some of the more important approvals still necessary are from the Colorado Department of Revenue’s Marijuana Enforcement Division, Mesa County Building Official and Fire Chief, and a Professional Engineer or Industrial Hygienist to certify that the equipment and procedures comply with all building, fire and electrical codes.

Infusion will be accomplished with use of a closed loop Butane extraction process, explained in detail in information provided by the Loughmans. There will be a dedicated area just to the manufacturing process in the building that currently houses the Colorado Alternative Healthcare Center. Only employees will be allowed into the manufacturing area, and there are no over-the-counter sales allowed from the manufacturing facility. Although a small canister of butane will be on the premises, trustees were assured by Fire Chief Richard Rupp that a “homeowner’s propane barbecue grill was probably more dangerous.” He also explained that the closed loop system resembles the way refrigerants are used in household refrigerators in a closed loop system.

The Loughmans are now selling many of the products (made by other manufacturers) that they would like to produce, giving them more control over the quality of the products, and making their business more efficient and profitable.

There is a long list of requirements imposed on the applicants, and the CUP is just the first step.  Medical marijuana businesses are licensed and regulated by the State of Colorado’s Marijuana Enforcement Division. The Loughmans are aware that there is no guarantee that they will be successful in meeting all the requirements.

Mayor Roger Granat pointed out at the meeting that in mid-December the U.S. Congress voted to prohibit the interference by federal authorities in states that have decided to allow medicinal marijuana. A ‘states- rights’ issue, the decision applies to medicinal marijuana only, as the Loughmans are requesting.

In a separate public hearing, a design variance to the Palisade Land Development Code was approved unanimously for the location and street yard setback of an accessory dwelling unit at 229 E. Third Street. Due to the topography and street access of the lot, it made sense, design-wise, to put the accessory dwelling unit in front of the main house, instead of in the rear, as is usually the case.

In addition to public hearings, the evening’s agenda included presentations of Certificates of Appreciation to Jesse and Desa Loughman for their continuing community service, organizing groups of volunteers to do clean-up and revitalization-type projects for the Town of Palisade. From planting gardens and saplings to painting bridges, the Loughmans have done it all. Jesse and Desa recognized their frequent volunteers to be honored as well. 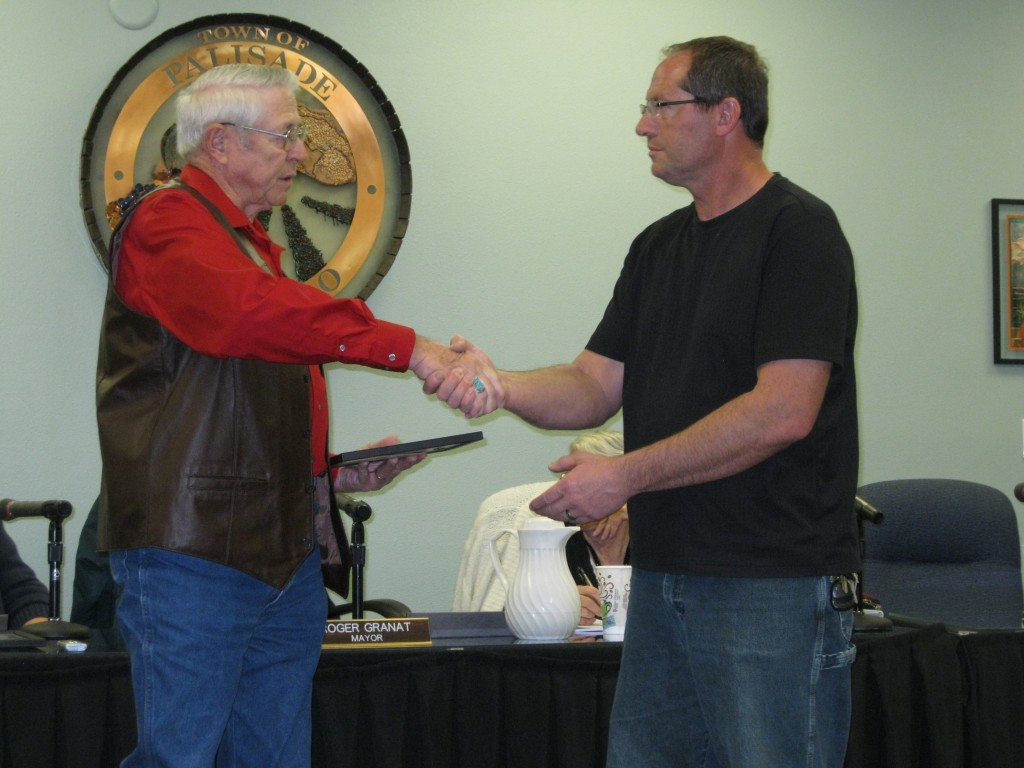 Ken Gideon was recognized for his service on Palisade’s Planning Commission. He resigned when his business began to need more of his time.

Richard Mathews, former Mayor, Planning Commission Chair and Member, Trustee, and member of the 5-2-1 Stormwater Management Steering Committee, was recognized and thanked for his years of service and dedication to the Town of Palisade. Although Mathews was unable to attend, Mayor Granat read the proclamation aloud and also spoke on Mathews’ contributions to the Town.

Public Works Director Frank Watt gave a visual presentation to the Trustees on the proposed Main Street reconstruction project that is currently going out to bid. Using an aerial view of Main Street, Watt was able to illustrate where the new utility lines, irrigation lateral and sidewalks will be.  Widened sidewalks will be a part of the new look.  Construction is expected to start in February and be completed in June.

Town Administrator Rich Sales explained that the purchase of the Cameo land on which to build the sport shooting complex will be paid for, in the majority, by two different grants, one from the Department of Local Affairs (DOLA), and one from the Federal Mineral Leasing program, sharing the proceeds of oil and gas leasing on public lands with local authorities.

Sales also reported that work has begun on the new downtown public restrooms across Main Street from the Town Plaza, and also on the new school crossing to the west, about a half a block from the recently removed crossing lights between the convenience stores.

Lisa Wangsnes, 577 Rosa St., used the Public Comment period to request that trustees consider an ordinance banning pit bulls and pit bull mixes from the Town of Palisade. She feels that in our tourist town, snarling pit bulls are not a welcoming presence, and she feels that the population of the breed is growing on the western slope as more Front Range cities ban them. She brought a packet of information for each trustee to consider.

Ken Gideon, 318 W. Second Street, complimented the town on the outcome of the Second Street redevelopment. He also asked that a certain bike rack be moved to a different location, as he pointed out that the presence of a bicycle in the rack would obstruct the new ADA compliant sidewalk.

Trustees also approved an ordinance authorizing the conveyance of a piece of property that had already been approved for sale to Donald V. Stack and Georgette L. Stack of 841 Rapid Creek Road.

Mayor Granat spoke about current vacancies on the Tourism Advisory Board (TAB), and a vacant seat on the Board of Trustees. The position of trustee is open to any registered voter, 18 years of age or older, but they must live within the official limits of the Town of Palisade. (The residency requirement is set by state statute, not by local decision.) Trustee meetings are held on the second and fourth Tuesday evenings of each month at 6 p.m. at the Civic Center meeting room at 341 W. 7th Street. Since the position would be filling an unexpected vacancy, the new trustee will be appointed by trustees for the remainder of the current term from applications received, with the seat coming up for re-election in April of 2016.

A number of the vacant seats on the Tourism Advisory Board do not have to be held by town residents.  The TAB meets every second month on the second Tuesday at noon, also in the Civic Center meeting room.

Trustees agreed to run the advertisement for the openings in the Daily Sentinel for at least two more weeks. For more information, contact Town Clerk, Lindsey Chitwood, at 464-5602.

Also available to any interested residents are copies of the information packets distributed to trustees before their semi-monthly meetings. Agendas are available on the town’s Facebook page, and the entire packet can be viewed from the town’s website itself at least 24 hours prior to each public meeting. Again, contact Town Clerk, Lindsey Chitwood for details.