Citizens of Palisade were introduced to their newest police officer, Bryce Raber, at the August 25, 2015, meeting of the Board of Trustees. Police Chief Deb Funston spoke about Raber’s background and training before presenting him to the board, relaying her high regard for his skills and attitude. He was sworn in that morning in Palisade, with his family and friends, who had driven over from the Front Range to share the occasion with him. 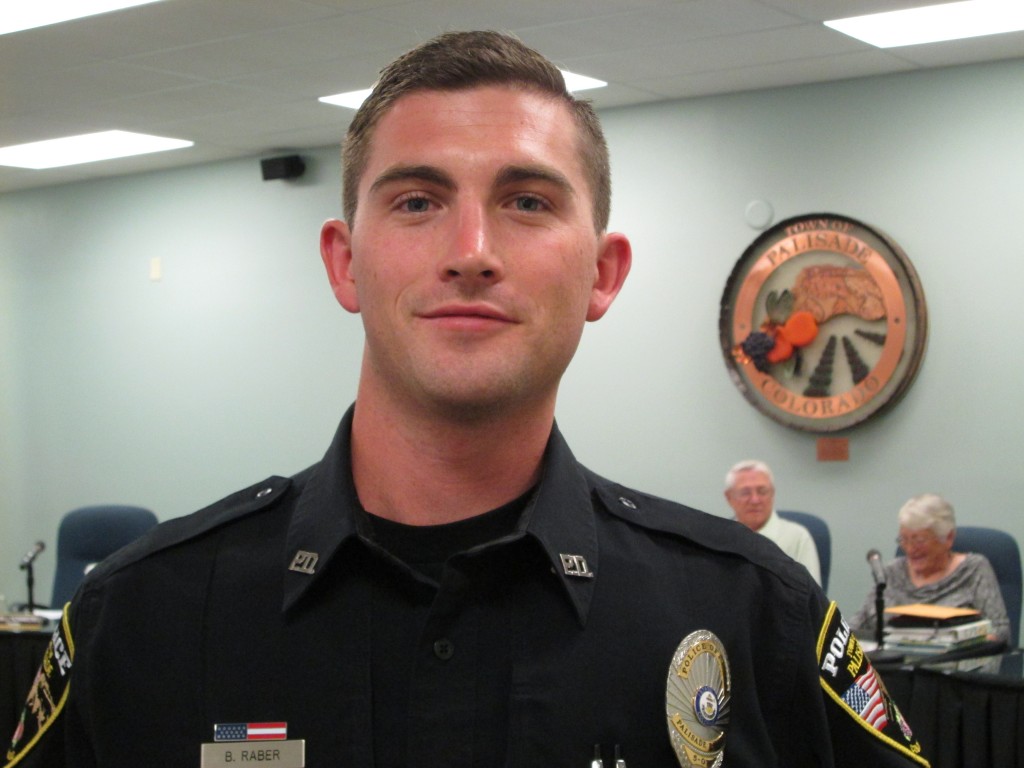 Officer Bryce Raber joined the Palisade Police Department following his swearing-in on Tuesday morning, Aug. 25. Raber has a degree in Criminal Justice from Colorado Mesa University and grew up on Colorado’s Front Range before making the smart move to the western slope.  Photo by Bill Hoffmann.

All trustees were present for Tuesday night’s meeting, as was Colorado National Bank branch president Scott Holzschuh, who presented the board with a check for $500 as sponsor of the Ice Cream Social, held on Thursday, August 13, kicking off this year’s Peach Festival. Holzschuh also lent a hand at the Ice Cream Social, dishing up peaches and ice cream for town residents as they danced to country tunes played by nationally known furniture impresario and country/western musician Jake Jabs of American Lifestyle Furniture. 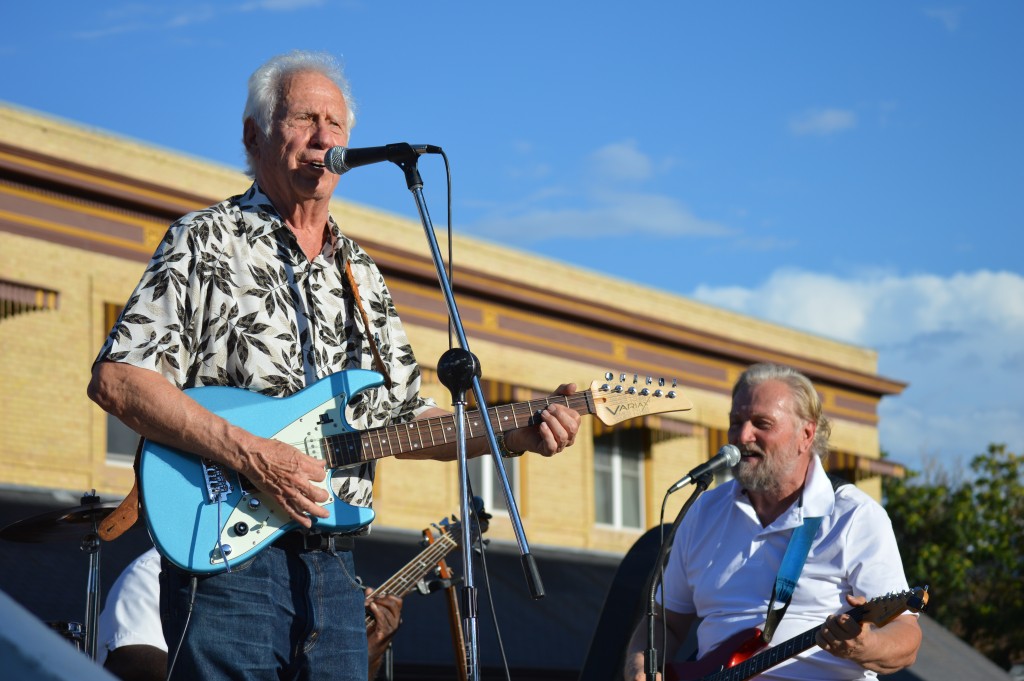 Jake Jabs, founder of American Lifestyle Furniture (formerly American Furniture Warehouse) is also an entertainer, playing a few country-western tunes for the Ice Cream Social crowd. Ron Koss and bandmembers were happy to accompany him, and then played on through the evening.  Photos by Betsy McLaughlin.

Thanks as well to all growers that donated peaches this year to the Peach Festival’s Ice Cream Social, it was a great success.

At the meeting, the consent agenda, including the town’s regular monthly expenses, as well as a previously approved grant request of $41,000 for construction of improvements to Palisade’s stormwater drainage capacity, was approved unanimously. Also included was a resolution approving the sale of the unsatisfactorily performing vehicle from the police department to help defray the cost of a new vehicle, approved at the August 11 meeting.

A resolution supporting a no-match grant request for $48,000 from the Mesa County Federal Mineral Lease District was also approved by the board, funds from which would be used for purchase of additional Self-Contained Breathing Apparatus for the town’s firefighters. In addition to supplying the breathing units, each firefighter will also be able to have their own individual mask, an important health and safety feature.

The grant request has been approved and is actually being made by the Rural Fire District, but since all their revenues are administered through the town, the town is also a signer on the request.

No one spoke to the board during the public comment period.

It’s all about the fiber… but not the Grape-Nuts…

Town Administrator Rich Sales gave a short intro to Colorado Senate Bill 05-152, regarding the ability of the town to sit in on discussions with providers of broadband and fiber-optic internet service as plans are made to expand service into the Palisade area. He suggested that trustees consider placing a ballot question for the April 2016 election.

Most Western Slope communities have been found to be lacking in internet capability, putting a dent in the ability to attract new businesses to the area. It is currently against the Colorado law for towns or municipalities to be parties in the negotiation of utilities unless the citizens of each town specifically approve the practice.

Conduit was run during the reconstruction of Main Street this summer, paving the way, so to speak, for the addition of fiber optic cable once it can be approved and financed. Grant money is also available once the citizens have consented to being part of the negotiations for service.

“This is NOT an attempt to be an internet provider by the town,” assured Sales. “We’re simply trying to help build the backbone, and would do that in unison and communication with the private providers.”

Many of the trustees commented on the need for improved internet capability, citing lack of it as one of the main drawbacks to local economic development. Agreeing to consider a ballot item, they also are considering how such a question would be worded.

Sales also discussed his experiences so far at meetings of the county-wide Economic Development Plan and Location Assessment. Highlighting his efforts to keep agriculture as a major part of our brand, he is looking forward to the next meeting of the group in September.

Bluegrass is here to stay, Thank-You to Lindsey!

Palisade Treasurer Joe Vlach reported that this year’s Palisade Bluegrass and Roots Festival was the most successful yet, financially speaking. In the seven years since the festival began in 2009, it has been steadily climbing in attendance, revenue and prestige as a musical event.

With the exception of 2010, when cold, rainy weather had a negative effect on the brand new festival, the trend has been continuing growth. With net revenue to the town of over $50,000 from this year’s festival, trustees have decided to continue to support it. They directed Town Clerk Lindsey Chitwood to chair the organizing and operation of the festival in the future after a doing such a good job with this year’s event.

Town Clerk Lindsey Chitwood gets ready to dish up some ice cream at this year’s Ice Cream Social, served by Town Staff. She is also the main force behind the organization of the annual Palisade Bluegrass and Roots Festival.

Fred Miller, sitting in for Public Works Director Frank Watt, reported on the progress of the bike skills park. Currently under construction at the east end of Riverbend Park, the park is expected to be finished in a couple of weeks. The dedication will be held on Saturday September 26 at 10 a.m. at the park. Miller reported that the builders are testing the course as they go along, making changes as they find necessary, seeming to enjoy themselves as well. 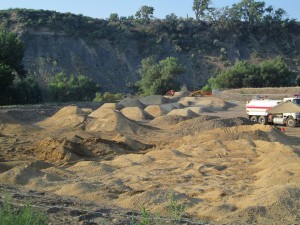 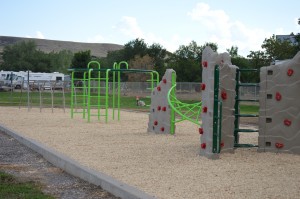 Miller also reported on progress on the new playground and outdoor classroom being constructed at Taylor Elementary School. The project is being funded by Great Outdoors Colorado (GOCO) with help from the Town of Palisade in securing and administering the grant.

Administrator Sales reported that he is only waiting on a final version of the contract from the town’s attorney before scheduling talks with Xcel Energy and Snowcap Coal to proceed on the purchase of the Cameo property.

Trustees made an unrelated decision to set up a revolving line of credit in the amount of $200,000 with the Colorado National Bank. With the reconstruction of Main Street completed, the town has had to pay contractors but has not yet received all the funding reimbursements, mainly from CDOT and Mesa County. Both reimbursements are in the works.

As Treasurer Vlach explained, the standing line of credit will make it possible to take advantage of any grant money that may come available in the next few months, some requiring cash matches by the town. It will also allow the town to make all necessary payments on time without waiting for the reimbursements, to prevent any negative effect on the town’s bond and credit ratings.

Police Chief Funston reported on the success of the Police Department over the Fire Department at the annual Guns vs Hoses Tug-of-War that takes place during the Peach Festival. 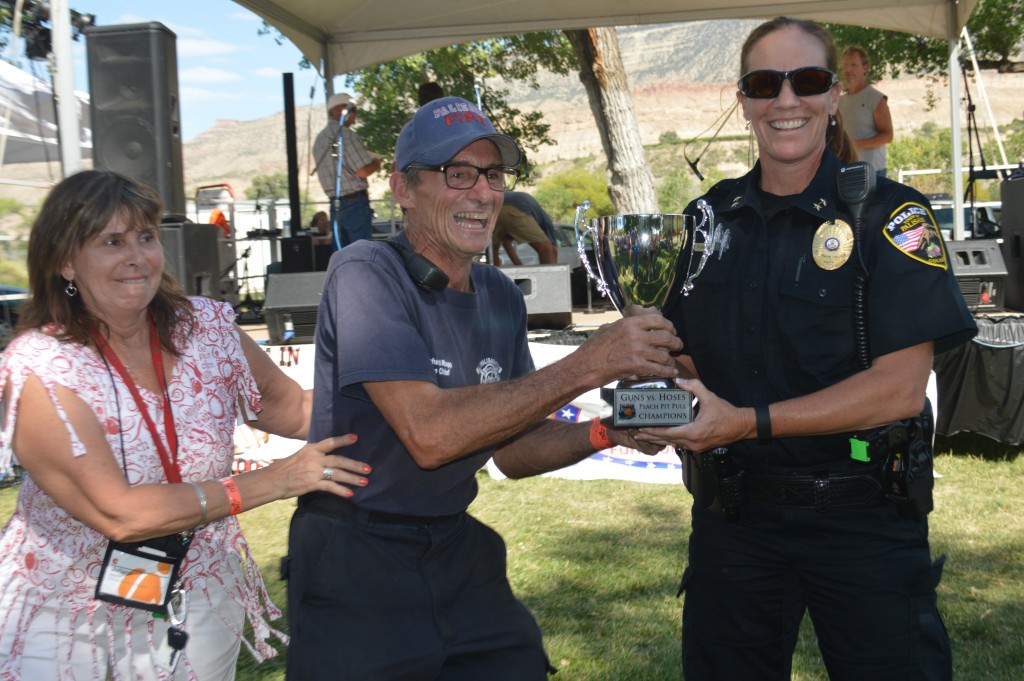 Palisade Police Chief Deb Funston keeps a solid grip on the Guns vs Hoses Tug-of-War trophy, awarded to the Police Department for the second year in a row at this year’s Peach Fest. Chamber of Commerce Director Juliann Adams, left, tries to control Fire Chief Richard Rupp, he just wants to TOUCH the trophy, he says!

The meeting was adjourned at 6:55 p.m. The next scheduled meeting will be on Tuesday, September 8, at 6 p.m. in the meeting room of the Civic Center at 341 W. 7th Street.  Agendas are posted at the town website.