More than 40 residents attended a March 3 information and question and answer session at the Palisade Civic Center about steps remaining in the process to change approximately 248 incorrect or missing addresses in and near Palisade.

Fire Chief Richard Rupp, who hosted the meeting, has been working on the changes process for two years. Chief Rupp said the next day, “There would good questions yesterday,” including some he hadn’t thought of yet.

The goal is to ensure that fire and emergency responders are able to find address locations that are now incorrect, missing, or duplicated. The changes should also make it easier for delivery services to find addresses.

At the meeting, Chief Rupp said the changes are needed, “So we can find you in a time of need.” Most of those attending the meeting agreed that the changes should be made, but had concerns about how they would be implemented. One resident noted that after his land was annexed there was no address. “We have a situation where we don’t even exist now.”

One or more residents at the meeting raised concerns about liability by the town. Others pointed out that elderly residents may be overwhelmed by the need to make the changes.

The timetable to complete the process is still being determined. Town officials at the meeting thought the addresses ordinance could go to the town trustees later in April, after the April 5 elections. A question was raised by residents at the meeting about possibly waiting until after the November elections before implementing the changes. Chief Rupp said he will contact the elections office to ask about the timing.

The ordinance would be adopted 30 days after the trustees approve it. At that time, a letter would be mailed to all the addresses affected. The letter would be the official notice and it would list the old address and the new address. Copies of the letter would be sent to businesses and government offices if needed.

At the meeting, the Palisade postmaster said correspondence would be forwarded to residents affected by the changes for one and a half years. Also, a resident pointed out that the numbers on the structures will need to be changed.

Rupp said the county assessor’s office would update its address records after the ordinance is adopted.

Several residents at the meeting asked if the town would prepare a list of types of agencies and correspondence they would be responsible for contacting and a list they won’t be responsible for. Chief Rupp later said, “We’re going to work on that.” Town Administrator Rich Sales thought a list could be posted at the town website.

At the meeting, Chief Rupp said the town will be responsible for notifying agencies about the changes, including utilities, assessor’s office, county GIS, the post office, and 911.

“It’s a valley wide problem,” Rupp told the audience. He described the history of the county grid system in the valley, starting at the Utah border, east/west and north/south. Problems include, however, separate grid systems in the municipalities, Grand Junction, Fruita, and Palisade. Also, “Computers don’t like fractions,” he added.

Rupp said at the meeting that his understanding is that address changes to driver’s licenses can be made by attaching a label to the license with the new address.

Some Palisade area address changes are in the county, but are close to Palisade. Those changes will go to the county for approval. Those residents will be notified. Chief Rupp said addresses in the county include those on Elberta Avenue., the north end of Main Street, Bower Avenue, Brentwood Drive, and North River Road.

Discussion of the re-addressing plan is also on the agenda for the Monday, March 7, Palisade Planning Commission.

Questions can be directed to Chief Rupp at rrupp@townofpalisade.org. 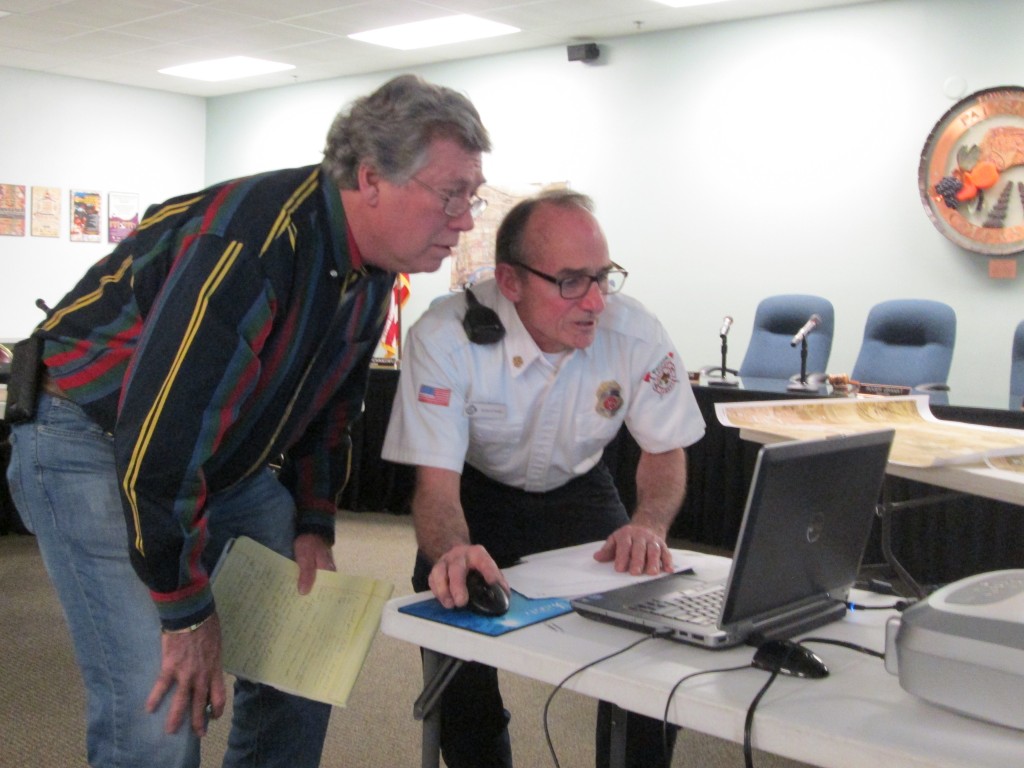 Looking at addresses on the county GIS map, Chief Richard Rupp (right) and business owner Steve Smith huddle at the computer at the March 3 town meeting.