Crowds of kids, moms, and dads watched Palisade’s Independence Day parade march through downtown the morning of July 4.  After the parade, they gathered in Memorial Park for games, prizes, and free ice cream provided by the Palisade Lions Club.

The parade featured the music of the Palisade High School Bull Dog Marching Band, riders on horseback, a horse-drawn carriage, gleaming vintage autos, fire engines, firefighters, police officers in Humvees, a pirate ship, a van with residents from the Palisades Living Center, marchers from American Legion Post # 50, a float with the mayor and town trustees, and two town grouches.

Candy was thrown to the crowds by participants in the parade.  The parade was about 20 minutes long.  Parade watchers included family dogs.

In Memorial Park, shaded by trees on the bright summer day, visitors were able to picnic, buy hot dogs and brats, stop at the Colorado Native Beer Garden, or sample Gelu Italian Ice.  Prizes and ribbons were awarded to game contestants.  Games included sack races, a cake walk, a Hoop Race, and a Nail Driving Contest.

Ron Koss, renowned musician and announcer, narrated the parade as it turned the corner at the Town Plaza, 3rd and Main Street.

The Town of Palisade and the Palisade Chamber of Commerce sponsored the 4th of July parade and games in Memorial Park. The parade gathered at the Fire Station. It started at 9 a.m. on 7th Street, marched north on Iowa Street to 3rd Street, then east on 3rd Street, and south on Main Street, disbanding at Memorial Park.

The Town of Palisade this year is celebrating its 110th anniversary, holding special events throughout the year.  See the town website for information:  townofpalisade.org.  Also, see the Palisade Chamber of Commerce website for event information, www.palisadecoc.com.

“Col. Bower,” in period suit and top hat, was portrayed by Dave Cecuga for the Palisade Historical Society.

The Historical Society held an open house at its History Center, 311 Main Street, where visitors viewed a new video of photos and scenes from early-day Palisade.  Regular hours at the center are Tuesday and Friday, 10 to 1, Sunday 11 to 1, also by appointment, 970 464-2177.

Ralph Moss, 86, long-time Palisade resident, and his wife, Theona, were watching activities in the park.  Ralph was asked about his wartime service.  He was wearing a cap that commemorated WW II, Korean War, and the Vietnam War.

Moss said he served in the Korean War aboard a refrigeration ship based in Oakland, Calif.  While on the ship, he visited the conflict in Korea seven times in 14 months.

Moss, who was born in Menlo, Kan., “on a wheat farm,” said Moss Way in Palisade is named after him.  “Moss street is in my hayfield,” he quipped.  He now lives on First Street. 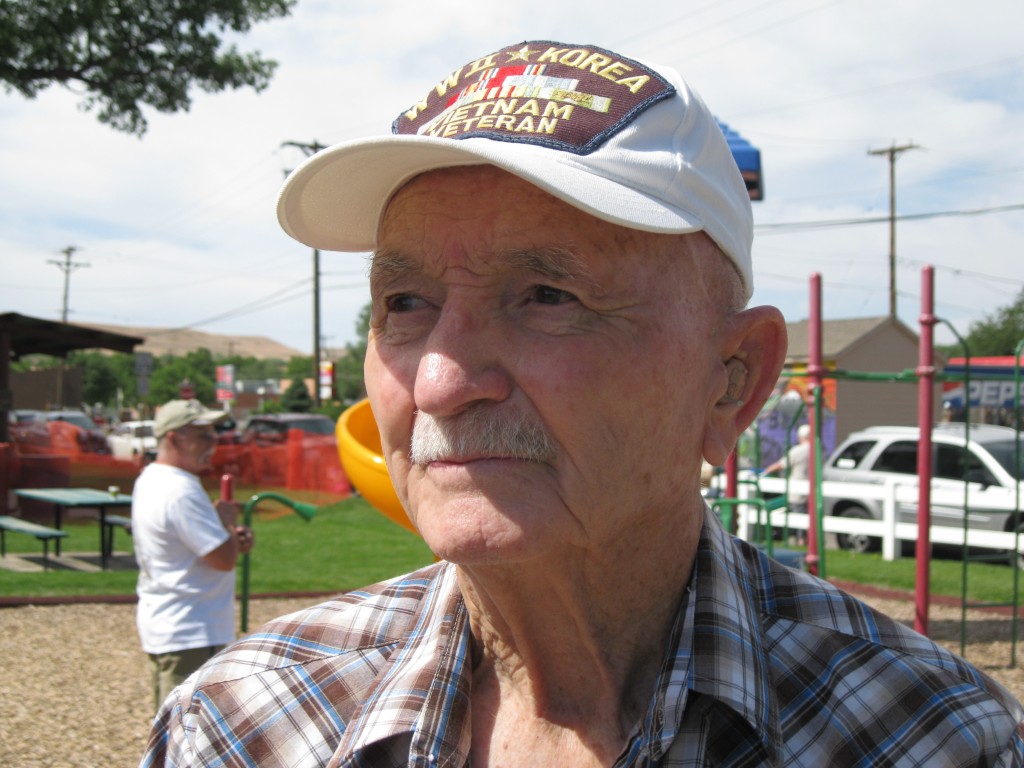 PALISADE’S 4TH OF JULY PARADE, AND EVENTS IN MEMORIAL PARK 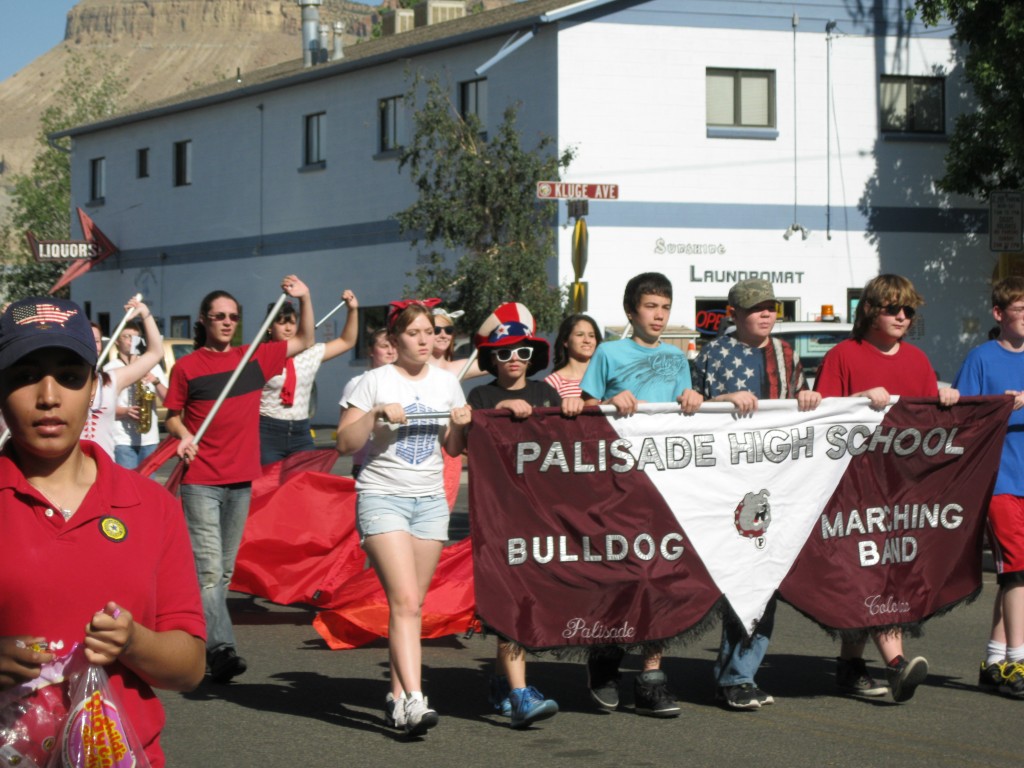 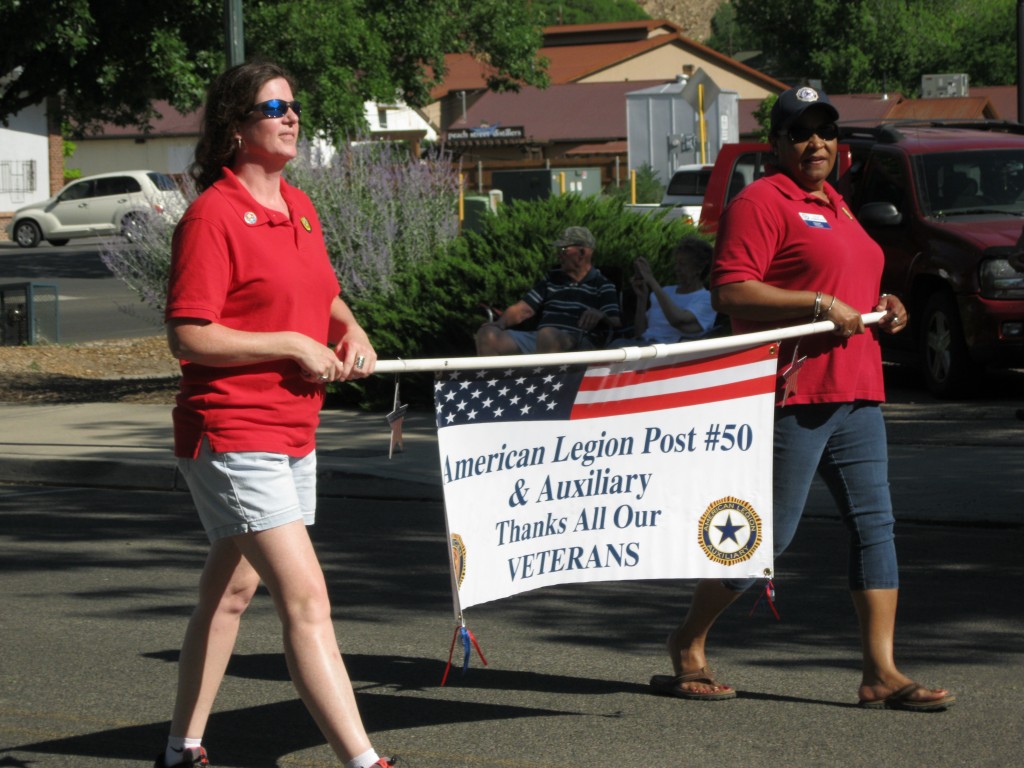 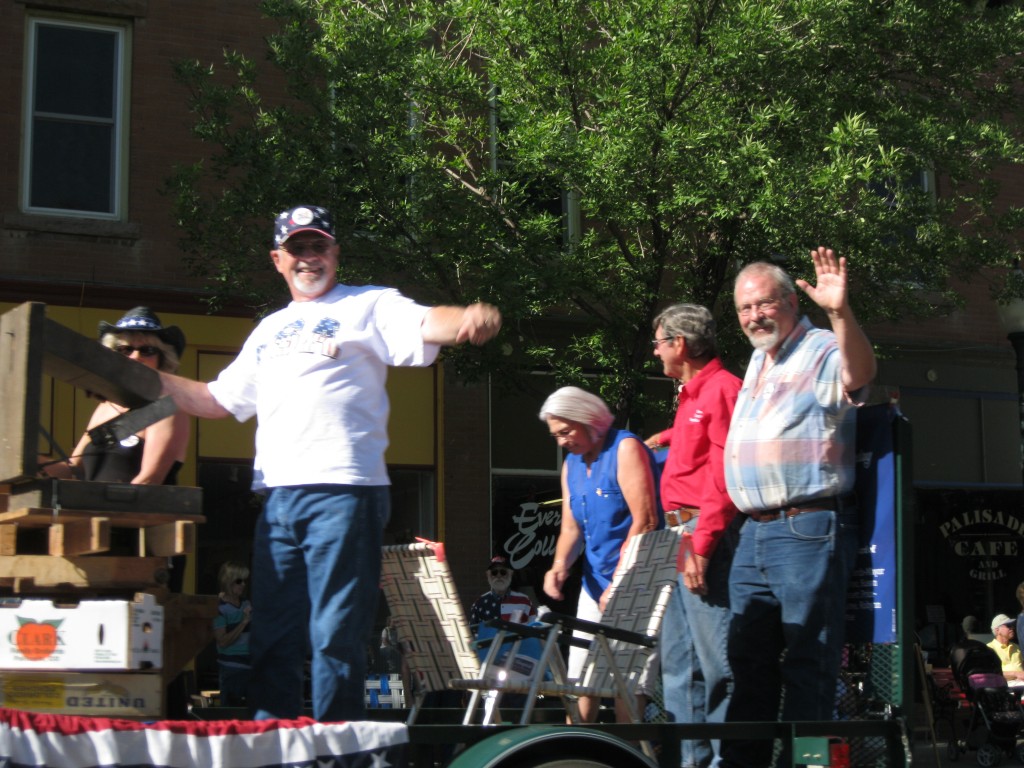 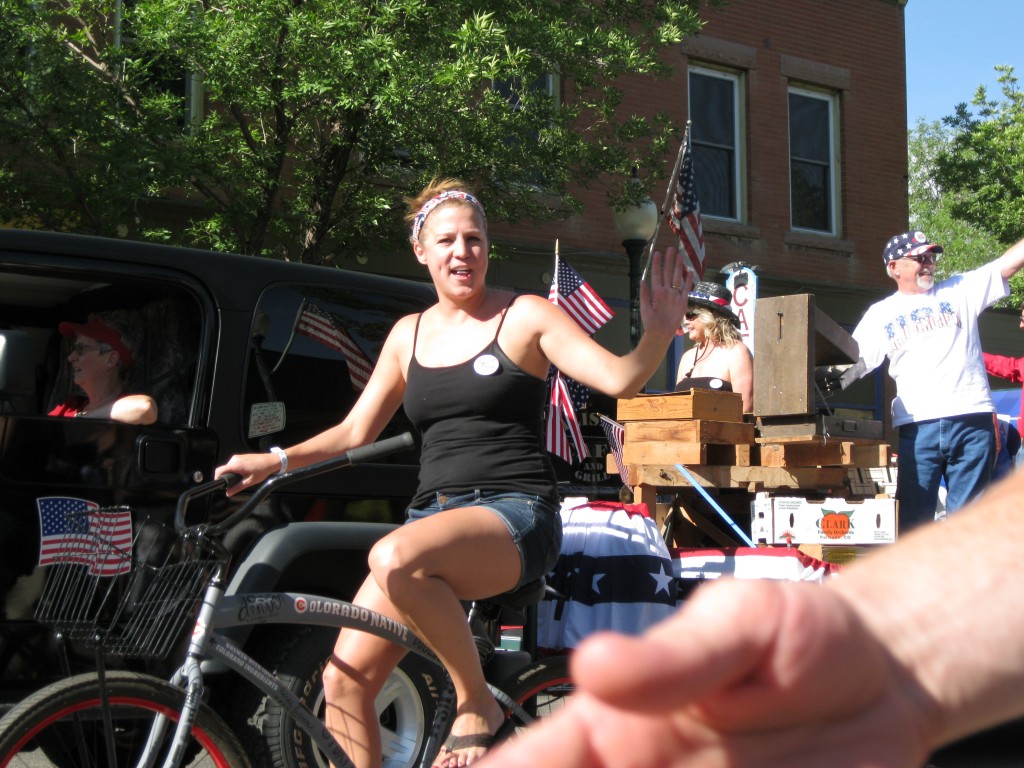 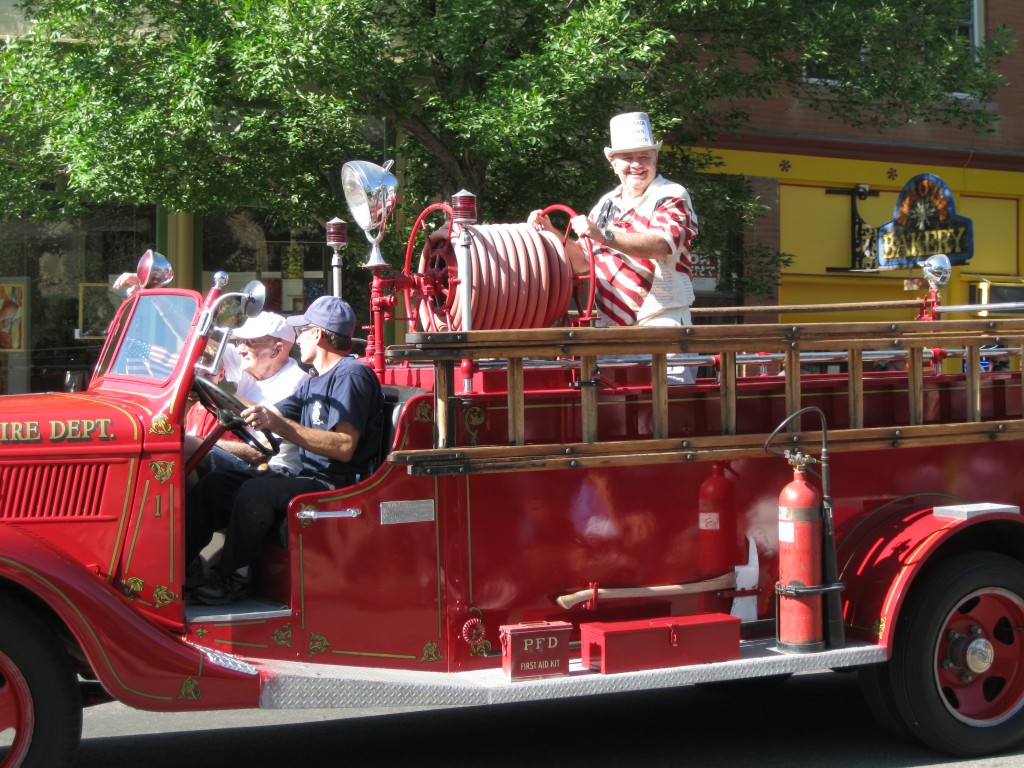 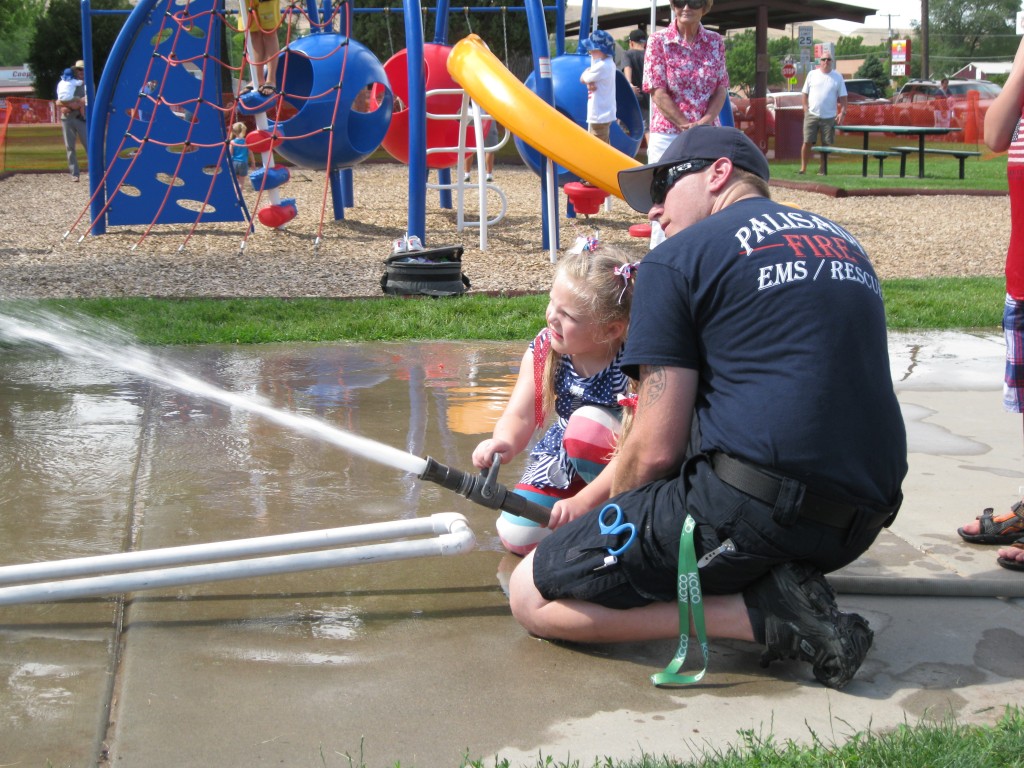 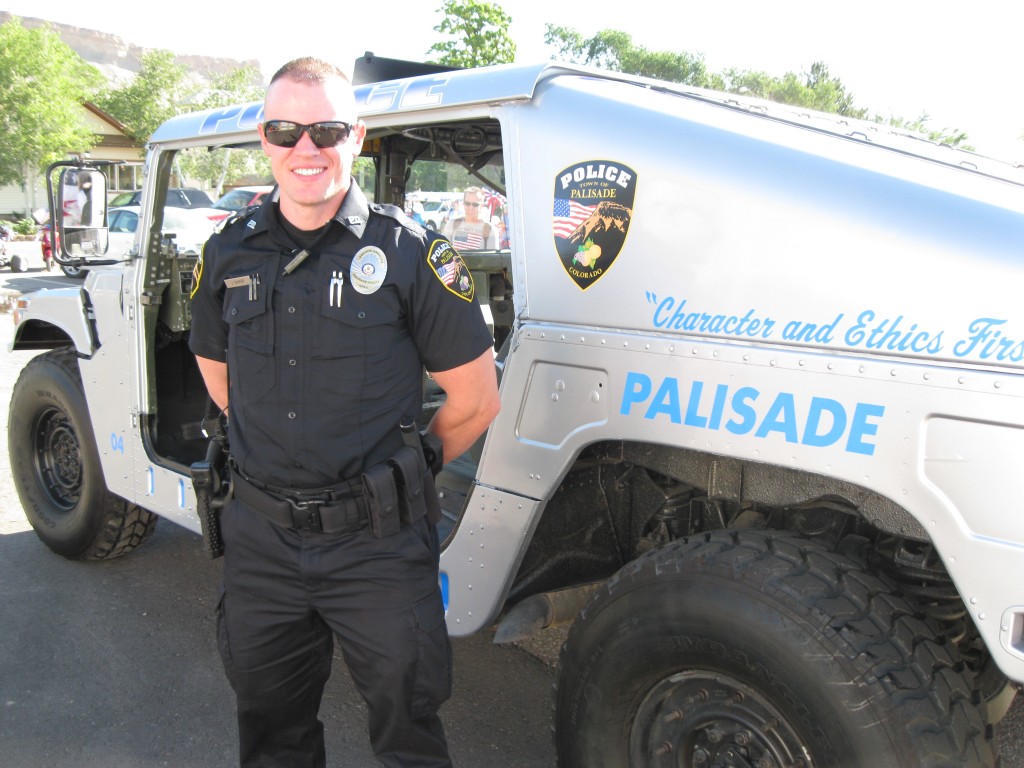 Palisade Police Officer James Baker is seen as participants were assembling for the parade outside the Fire Station.

Town of Palisade Board