We are sure to see an increase in the Grand Valley of mountain bike riders from Europe once riders in Europe see the photos and video produced the weekend of September 5, 6 and 7 by a team of visiting French press writers and media producers.

It was a collaborative effort and investment by the Grand Valley tourism boards in Palisade, Fruita, and Grand Junction.

The effort will benefit the economic development of the whole community.   We hope to see more of these projects in the future.

It began when a close knit group of European writers and producers reached out this year to the COBB & Associates marketing firm in Grand Junction, through the firm’s mountain biking connections, for a media tour of the premier Colorado mountain biking trails.

The writers and producers contribute articles, photos and video coverage to four of the top mountain biking magazines in France and Europe.

In return, Grand Junction, Fruita, and Palisade will receive European media coverage, and rights to use all the still and video media productions, valued at $50,000 to $60,000. 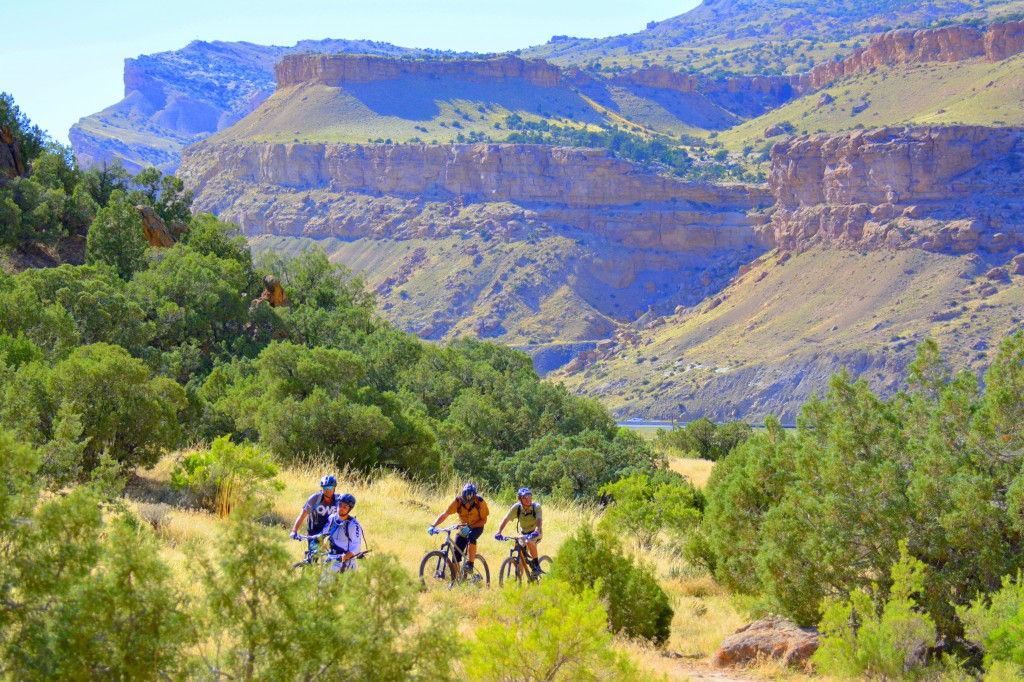 Nicolas (Nikko) Le Carre, Christophe (MoMo) Morera and Kilian (KiKi) Bron arrived in Fruita on Friday night, September 5, and were treated to a western BBQ at Moon Farm, and spent the night.

Early Saturday, the three hit the 18 Road trail for a sunrise ride accompanied by a video crew, Scott Winans of Rapid Creek Cycles, Palisade, and Paul Aieta of COBB.  Hot Tomato Cafe treated them to a pizza lunch at the end of the ride.

MoMo, the leader of the group, said, “We have enough in the can right now for what we need, but there is so much more beauty to capture.”

The French media visitors checked in at the Wine Country Inn in Palisade to drop off their bags and rode on to Clark Family Orchards where they were met by Brant Harrison of Kokopelli Farm Market, Jim Cox of JC Photography, Juliann Adams of the Palisade Chamber of Commerce, and Felix and Donna Iovanni of Vistas & Vineyards B & B.

Denis Clark gave the visiting group a brief tour of the orchard while they snacked on Kokopelli peach pies and set up a stage for interviews.  Palisade peaches were voted, on camera, to be the best in the world.

The guys were enjoying their break but Paul, of COBB, and Scott, of Rapid Creek Cycles, kept them to schedule and they headed up to the Palisade Rim Trail for a spectacular three hour ride.

The men got to kick back and relax at the Palisade Brewery with the Palisade entourage, with great food, beer and lots of stories.