The Town of Palisade announced that Police Chief Tony Erickson has decided to leave his current position with the Town of Palisade to pursue other opportunities. Erickson noted ” I  want to thank the Palisade Police Department for allowing me the opportunity to serve with such a high quality group of dedicated professionals, and I am grateful for the chance to have served the citizens and the Town”.  Deb Funston, who was serving as interim chief has been officially promoted to be Palisade’s Chief of Police.

On May 29th Deb Funston was sworn in as the Town of Palisade Chief of Police.  Chief Funston has worked in Law Enforcement for the last 26 years, and more recently with the Palisade Police Department as Administrative Sergeant and Criminal Investigator since 2011.  Deb has also served as the Interim- Chief for the eight weeks prior. 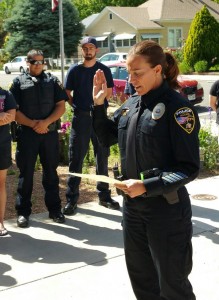 Deb Funston takes her oath of office as the new chief of police for Palisade.

Chief Funston will oversee the police department staff of eight full-time, two part time staff and five reserve officers.  The Town of Palisade announced also that they recently promoted Jessie Stanford to Patrol Sargent and added patrol officer Zach Adams, who has served Palisade already as a volunteer Fire/EMS provider for the past 4 years.

The staff of the Town of Palisade and the Board of Trustees are dedicated to providing a great, small-town, police department for Palisade. Deb’s experience and professionalism will foster continued improvements in our services to the community. Thanks to the citizens and businesses of Palisade for your continued support.