The Palisade Planning Commission at a hearing on January 5 unanimously recommended approval of a Conditional Use Permit, with conditions, to allow the owners of Colorado Alternative Health Care, a medical marijuana business at 125 Peach St., to operate a new business, Palisade Apothecary, Ltd.

The commission’s recommendation will be considered by the town trustees on Tuesday, January 13.

The new business would be operated in a 560 square foot room now empty at the same location, and the business is intended to manufacture medical marijuana infused products (MIP).  Some of the products are prepared as edibles.

At the planning commission meeting, Desa and Jesse Loughman, owners of the new business, discussed questions from commissioners about zoning, disposal of any residue from manufacturing the products, and security.  There were four members of the public in the audience, plus a reporter from KREX TV.

“The expansion into the MIP business is needed,” the Loughmans said in a letter to the town, “so we can meet the strain-specific needs of our current medical marijuana patients, as well as offer reduced cost on infused products.”  They are also the owners of the Colorado Alternative Health Care business.

In the letter, the Loughmans say, “We intend on manufacturing a variety of products such as salves, oils, tinctures, edibles and concentrates.  This company will also bring in more tax revenue and jobs for the Town of Palisade.”

“Extraction of oils from the Cannabis plant,” according to the letter, “provides numerous benefits for medical cannabis patients who do not smoke their medicine.”

The Loughmans’ letter states that the Apothecary business will not be open to the public, and that only state and locally approved employees will be permitted in the room.  The business will require at least two additional employees, they indicate.  “All entrances require a written log book, accompanied by the 24-hour surveillances,” they add.

In the letter, the Loughmans indicate that marijuana plants for the infused products will not be grown in the current production area at the Alternative Health Care location.  The Loughmans intend to apply for another town Conditional Use Permit in order to grow MIP plants off-site.

In October, the planning commission recommended in favor of amending the land development code to allow off-site cultivation for medical marijuana.  The town board approved the amendment.

The Loughmans at that time said they intended to lease a one-acre site on recently annexed agricultural land in order to grow medical marijuana, and in the future retail marijuana if allowed.  The site is part of a peach orchard operated by the Cox Farm.  Marijuana cultivation is not permitted in Mesa County.

In June, the Planning Commission voted to recommend approval of the 10.2 acre agricultural annexation at the northeast corner of Palisade.  The town board approved the annexation in July.

In a recent memo to the planning commission, Ron Quarles, Palisade community development director, said if the CUP request for production of marijuana infused products is approved, but it is determined later that there is “any adverse impact on the adjoining properties,” the town board may review the permit.  The board also may “impose additional conditions, or terminate the CUP,” if the adverse impacts cannot be satisfactorily addressed.  In addition, the CUP shall be subject to a two-year review.

Quarles listed nine conditions.  They include that a request in the future for off-site marijuana cultivation for infused products shall be reviewed by the town board as a separate conditional use application.

Desa pointed out that the majority of people don’t smoke, therefore, for instance, edible products can be used by patients with respiratory problems.  In addition to teas, topicals, oils, tinctures, and pills, products include suppositories for patients who may be vomiting.  Infused products also are made as dermal patches, she said.

In a brief tour at the Colorado Alternative Health Care location, Desa Loughman explained security measures.  “Each plant has its own bar code,” on a tag, which the state can scan and track, she said.

The federal government classifies marijuana as a controlled substance, as reported online.  In 2012, voters in Colorado approved an amendment to the state Constitution that permits the use of marijuana for adults 21 and over.  However, a vote in November by Palisade residents to approve the use of retail/recreational marijuana was not approved by a narrow margin.

In other discussion, Commission Chair Betsy McLaughlin introduced and welcomed Ron Gearhart, a new member of the commission.  Gearhart commented that he was born and raised in Palisade and that his father owned the Gearhart Coal mine.

The 30-minute meeting was held at the Palisade Civic Center.  Commission meetings are normally held on the first Monday of the month, at 6 p.m.  Meetings are open to the public.  The next meeting is scheduled for Feb. 2.  Agendas are posted on the town website. 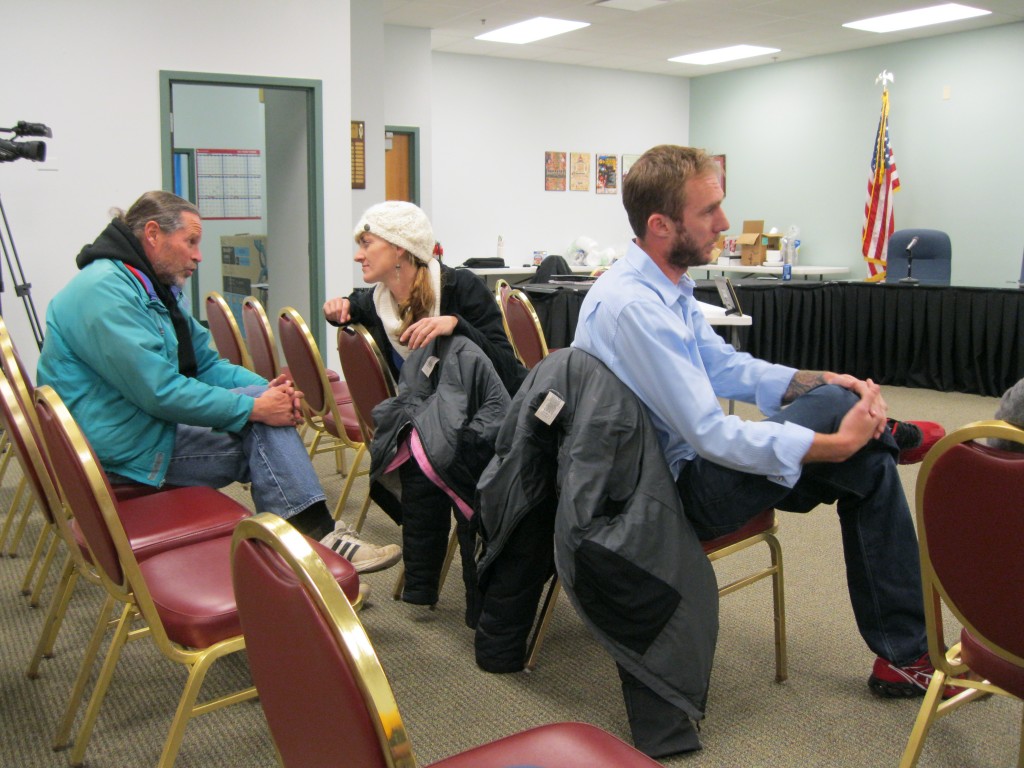 Desa and Jesse Loughman, right, owners of a medical marijuana business in Palisade, talk informally in the town chambers following a January 5 public hearing on their request for a permit to manufacture medical marijuana infused products.  Also seen in the audience is Joe Niehuser, while Jesse Loughman is interviewed by TV reporter Kattey Ortiz, KREX, outside the photo.

By Peach Town News|2015-01-09T07:42:00-07:00January 9th, 2015|Government|Comments Off on Palisade Planning Commission recommends in favor of a permit for manufacturing medical marijuana infused products