The Palisade Planning Commission at its Oct. 6 meeting voted unanimously to recommend approval of proposed amendments to the Land Development Code.

The commission heard from from the applicant, and about 13 citizens, most of whom raised questions and concerns about the image of Palisade related to marijuana.

The amendments would allow cultivation of medical marijuana in land zoned agricultural and at a location that is not contiguous to a medical marijuana center.  The application for amendments is from Colorado Alternative Health Care, the single center in Palisade, 125 Peach Ave.

The commission’s recommendation will be considered by the board of trustees on Tuesday, Oct. 14.

Approximately 35 to 40 people filled the room to capacity at the Oct. 6 planning meeting held at the Palisade Civic Center.  The hearing took about an hour and 10 minutes.  The area news media reported the meeting.

Most of the people attending the meeting appeared to be there for the hearing related to medical marijuana.  The public discussion at times appeared to mix concerns about both medical and recreational marijuana.

If the code amendments are approved, Jesse and Desa Loughman, owners of the medical marijuana business in Palisade, expect to submit plans to grow medical marijuana on a one-acre site leased from the Cox Farm, 3824 Highline Canal Rd.  The 10 acre farm was recently annexed to Palisade.  It is located north of the Highline Canal, south of Interstate 70.  The land was zoned AFT (Agriculture, Forestry Transitional), where a peach orchard is now located.

Ron Quarles, Palisade community development director, said in a memo to the planning commission, “The health care facility desires to expand its operations by starting an additional cultivation operation in an agricultural field separated from its current facility by approximately one mile.”

Quarles in the memo said that to enable off-site cultivation, both the Palisade Municipal Code and the Land Development Code need to be amended.

Last year, voters in Colorado, as well as Washington State, approved the sale of retail/recreational marijuana, starting in Colorado on Jan. 1 this year.

This year, the town of De Beque approved the sale of retail/recreational marijuana and has placed a question on the November ballot about taxing the sales.

This fall, the town of Palisade has a yes or no question on the ballot about the sale of retail/recreational marijuana, as well as a question about taxing the sales.

Quarles explained that an amendment to allow off-premises marijuana cultivation in the agricultural zoning is not limited to the site proposed, but applies to any parcel that is zoned AFT.  He pointed out that there are 29 land parcels now zoned AFT, with an average size of 3 acres.  The number of medical marijuana businesses in Palisade, however, is limited to two, one more than at present.

Quarles said the staff recommends that “if the requested amendments to the Palisade Land Development Code are approved, that minimum Specific Use Standards … are also in place to ensure the (off-site cultivation use) is compatible with the surrounding areas that could be impacted.”

Quarles explained in the memo, “If the amendments are approved as presented, a conditional use permit (CUP) must be granted by the Town Board for the specific site before the operations can begin.”  The permit would address issues such as public health or safety, adjoining property, and that the permit would apply only to the applicant and would not be transferable to future landowners.   The town board could also impose additional conditions, such as limitations in scale, hours, buffers, and others.

Standards for a conditional use permit would include security measures to show that “the outdoor areas are not readily accessible to the general public,” no advertising or sign would be permitted at the property, and the cultivation area would be set back a minimum of 50 feet from the property lines.

In addition, any requested changes to the original approvals, such as an increase to the size of the cultivation area, would require a modification to the conditional use permit approval, Quarles’ memo states.

The Loughmans in a letter to the town in August state, “This additional space is needed in addition to the current location at 125 Peach Avenue.

“The current location will not provide the necessary grow space needed to produce product for the whole sale market and the edible market.

“Expanding the grow space to include (the) Cox Farm will aide in the ability to have a more cost effective grow production.

“The leased space at (the) Cox Farm will allow Colorado Alternative Health Care to install two 1,000 square foot greenhouses for year round production, as well as offer a seasonal outdoor grow area.

“The need for this additional space will allow Colorado Alternative Health Care the ability to include the edible market, whole sale and allow expansion for the upcoming Recreational Marijuana vote in Palisade.  The extra production at (the) Cox Farm will suit the needs to bring product to those markets.”

The Loughmans told the commission that their medical marijuana business needs more room to grow plants.  Expanding their business at the current location would displace other businesses.  “We didn’t want to push another business out,” Desa said.

During the hearing, approximately 13 citizens asked questions about the proposed amendments.  Bryan Moffitt asked why this application hasn’t been put up to a vote.  Jesse Loughman responded that Palisade voters approved medical marijuana dispensaries in 2011.

Moffitt asked if the Loughmans had mailed a postcard to residents asking voters to vote yes this fall on Palisade ballot question 2A on whether or not to permit operation of retail marijuana businesses.  Jesse and Desa Loughman said yes.

Moffitt replied, “It is the most deceptive piece of advertising I’ve gotten in the mail.”

Some comments from the audience about changes in the land development code seemed to refer, instead, to concerns about possible sale of retail/recreational marijuana.

A number of people said it is important that citizens be informed before changes are made, to understand that Palisade is home, and to recognize the generations who have lived here.  A woman wondered how it would affect Palisade’s history of agriculture and tourism.

Desa Loughman said they started their application for changes some time ago, adding, “It’s too bad we don’t have the Tribune any more.”

Charlene Weidner said her land adjoins the proposed grow location, and that she has concerns about security, sounds, and visual effects.

Brant Harrison, a peach orchard owner, who lives on Rapid Creek Road, asked the Loughmans how many times they had run out of medical marijuana.  The Loughmans said they need room to grow different strains for different patients.

Arthur Day, a 10 year resident of Palisade, said, “We need more discussion.  This is totally unchartered territory.  We should slow down and really look at this.”

A Palisade resident asked if off-site grows could be allowed in all the agricultural zones shown on a map of Palisade.  Quarles, community development director, said only two medical marijuana dispensaries would be permitted to operate in Palisade.  The woman said, still, “You can understand where my concerns are.”

Bryan Moffitt spoke again, saying, “Palisade is known for peaches, wines, parades, and festivals.  Eventually we’ll be known as the pot place.”  He asked, “Are we going to have a medical marijuana festival?”  Chairwoman Betsy McLaughlin noted that Moffitt could also speak at the hearing by the town trustees on Oct. 14.

A woman asked why the changes proposed couldn’t go to a vote of the people.   Quarles, community development director, said, “Typically, zoning is not a referendum issue.”

Jean Tally, whose family owns and operates the Wine Country Inn, commented, “It seems this is a Trojan horse to permit (retail) marijuana sales.”

Jean and Richard Tally said in a written statement, “As owners and operators of a lodging property less than 1 mile from the proposed site for Marijuana growing, we strongly oppose a change in zoning to allow Open Grow and/or greenhouses on the land parallel to I-70 because of the negative impact it will have on our business and our neighbors who are adjacent or contiguous to the site.”

At the meeting, Tally noted that she is a member of the Palisade Tourism Advisory Board and that her business contributes to the Palisade tourism fee for marketing.  “We struggle to show Palisade as a wholesome destination for families,” such as viewing alpacas and wine tasting.

“A lot of us promote Palisade with our own money—but not if we’re going to be pot town and not peach town,” she said.  She urged that the application be tabled until studies can be made on the impact.

“I don’t see how the town of Palisade can embrace this idea without affecting … (Palisade) as a wholesome place to come to,” Tally said.  “I agree,” a person in the audience said, followed by applause from much of the audience.

In turn, Desa Loughman thanked the audience for coming, and said, “Jesse and I have donated (time) to Palisade.  We want Palisade to be beautiful and safe.”  Desa noted that they have also volunteered at Palisade High School for the Live Above the Influence Week event.

“We run a professional business,” and will continue to, she concluded, drawing some applause.

After a woman asked several questions about where to grow medical marijuana outside of Palisade, and not near I-70, Chairwoman McLaughlin advised, “Ma’am, this has gone beyond comment to arguing.”

Kenneth Ruth, planning commission member, moved to approve the proposed amendment of the Land Development Code.  “This is a business decision,” he said, referring to the application.  Ruth also noted that the proposed changes concern medical marijuana, not recreational marijuana.

Ruth said the medical marijuana dispensary is a business, “just like the drugstore.”  The motion was seconded by Roger Rawlings.  The five commissioners present voted in favor of the motion.  Present were Chair McLaughlin, Rawlings, Ruth, Charlotte Wheeler and Lafe Wood.

Questions that came up during or following the meeting were concerns about communication and information without the Palisade Tribune newspaper, public participation, and microphones and poor sound.

In other business, the planning commission voted unanimously to approve a request by the town of Palisade to zone a newly annexed strip of land at 3871 G Road as Community Public District.

Responding to questions from the audience, Quarles said there is no anticipated use for the property now, but that there are discussions with School District 51 about using it as alternative access to Taylor Elementary School.

The commission’s recommendation will be heard by the board of trustees on Tuesday, Oct. 14.  The trustees’ meetings normally start at 6 p.m.

Chair McLaughlin read an email letter from Commissioner Ken Gideon in which Gideon submitted his resignation from the planning commission.  Gideon said his work schedule has changed and also that he will be unable to attend the November meeting.  “I regret I cannot fully serve my term,” he wrote.

McLaughlin said, “I’m sorry to accept Ken’s resignation.  I would like to thank him very much for his service.”

McLaughlin announced the vacancy and asked Palisade residents interested in applying for membership to submit a letter the town.  Application instructions are posted at the town website:  http://www.townofpalisade.org/. 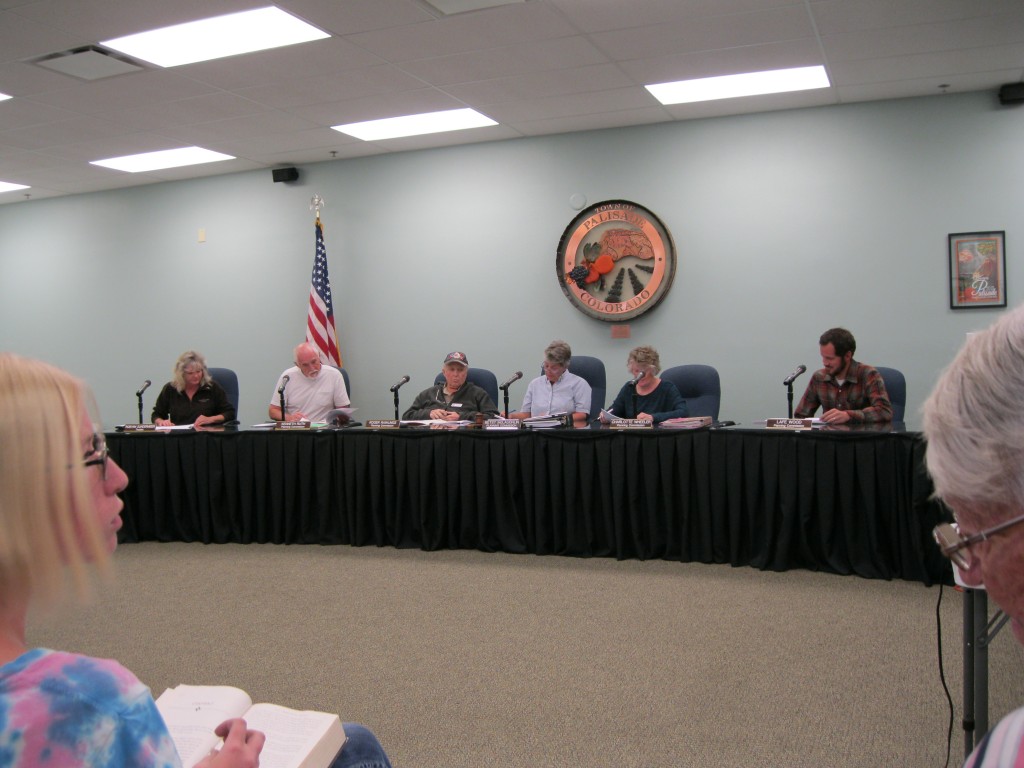 A vacancy on the planning commission was announced.  Palisade residents interested in applying may submit a letter the town.  Instructions are posted at the town website.  The Oct. 6 meeting was attended by (left to right) Palisade Trustee Robynn Sundermeier , commissioners Kenneth Ruth, Roger Rawlings, Betsy McLaughlin, chair; Charlotte Wheeler, and Lafe Wood.

Commission meetings are held on the first Monday of the month, 6 p.m. at the civic center, and are open to the public.