The Palisade Planning Commission at its meeting on Dec. 15 held preliminary discussion to establish a zoning district, permit process, and standards for potential future manufactured housing in Palisade.

The proposal is part of the commission’s re-write of sections of the Land Development Code.  There is nothing in the code now that provides direction on such housing.  The commission expects to continue the manufactured housing discussion at the January meeting.

During the meeting’s public comment period, Palisade resident Jim Solomon raised concerns about what he called the depressing appearance of some properties in the old section of town and about pedestrians concerned about dogs jumping on fences and barking at them.

The commission recommended that Solomon talk to the code enforcement officer in the town police department about the concerns.

Solomon said he has seen some changes for the better in the 14 years he has lived in Palisade.  He pointed to current plans to rebuild Main Street and to create a bike skills park at Riverbend Park.

Ron Quarles, Palisade community development director, noted that the planning commission’s role is mostly advisory to the town board.  The commission’s work, he said, involves areas such as rezoning, conditional use permits, site plans, and the Comprehensive Plan.

Solomon commented, “We are inundated with rentals in our town.  A lot are not taken care of very well.”  Solomon said, “I’m not suggesting we become a Republic of Boulder,” however, “I suggest some changes.”

Development Director Quarles asked commission members for their preliminary preferences about options he is proposing for a Land Development Code re-write concerning designation of any future proposals for manufactured housing.

“By state law, we have to have zoning in place for new manufactured housing,” he told the commission.

Quarles proposed three options in a memo to the commission:

1. Create a new zoning district(s) for manufactured housing subdivisions, with individual lot ownership.  Manufactured homes would not be permitted in other residential zoning;

2. Where manufactured housing would be permitted only in PUD (Planned Unit Development) zoning, and not permitted in other residential zoning;

3.  Allow manufactured housing in residential zoning by CUP (Conditional Use Permit).  Minimum standards would be established for either residential subdivision (with individual lot ownership) or in a park.

Quarles said staff prefers Option 1 or 2, rather than a zoning map that does not identify areas for manufactured housing.  Robynn Sundermeier, town trustee and liaison to the commission, asked if both 1 and 2 could be adopted.  Quarles said yes, and commissioners generally were in favor of that.

Trustee Sundermeier said adopting both options 1 and 2 would maintain the residential integrity of the town.  Sundermeier added that she would not like placement of manufactured housing in a “stick-built” housing area, which could be possible under option 3.

In his presentation to the commission, Quarles pointed out the distinction between what was known as mobile homes prior to new standards adopted in 1976 by the U.S. Department of Housing and Urban Development (HUD) and manufactured homes built following adoption of the standards.

In his proposals, Quarles suggests recognizing and designating the two existing manufactured housing parks as communities, rather than as individual homes.

Commissioner Kenneth Ruth asked if the options proposed would pertain to existing parks.  Quarles said possibly, for instance, Rio Vista looks like a subdivision, so there might be an opportunity to bring it into conformity under the proposed options.

Commissioner Ruth noted that some parks in town “look pretty rough.”   Trustee Sundermeier noted, in comparison, that the landscaping around the Midlands Village manufactured home community in Clifton “makes it look better.”  Sundermeier said such housing in Palisade should be landscaped.

Commissioner Charlotte Wheeler asked about the status of the “trailers near the Packing Shed.”  Quarles said they are zoned commercial business and are non-conforming.  Trustee Sundermeier asked, “You couldn’t make them conform to landscaping?”  Quarles said, “It’s difficult.”  Sundermeier acknowledged it would upset people, but noted that the location is “an entryway to our town.”

Commissioner Ruth asked what percentage of Palisade’s land now is developed as mobile homes.  Quarles said about 19%.  Ruth asked if there is a ratio guide between stick-built and manufactured housing.  Quarles said he can look into it.

In both options, manufactured homes that had been damaged, destroyed, or removed “may only be replaced by homes built in compliance with the National Manufactured Home Construction and Safety Act of 1974 and have the HUD Code (1976 or later),” Quarles states in his memo.

In other business, commission unanimously approved a design variance for the placement of a covered porch for a house planned at 3857 N. River Rd.

Community Development Director Quarles described a survey to be conducted for the City of Grand Junction for economic development branding and a marketing initiative.  Grand Junction will include Palisade and Fruita participation in the “Community Vision Survey.”

Quarles said Town Administrator Rich Sales said it would be best if there is one response from the planning commission rather than from each commissioner.  Quarles proposed discussing a consensus response at the next meeting.

The one hour meeting was held at the Palisade Civic Center.  Ron Gearhart, a newly appointed member of the commission, was not able to attend.  Commission meetings normally are held on the first Monday of the month, at 6 p.m. and are open to the public.  The next meeting is scheduled for Jan. 5.  Agendas are posted on the town website.

Photo gallery of other mobile home areas in Palisade. 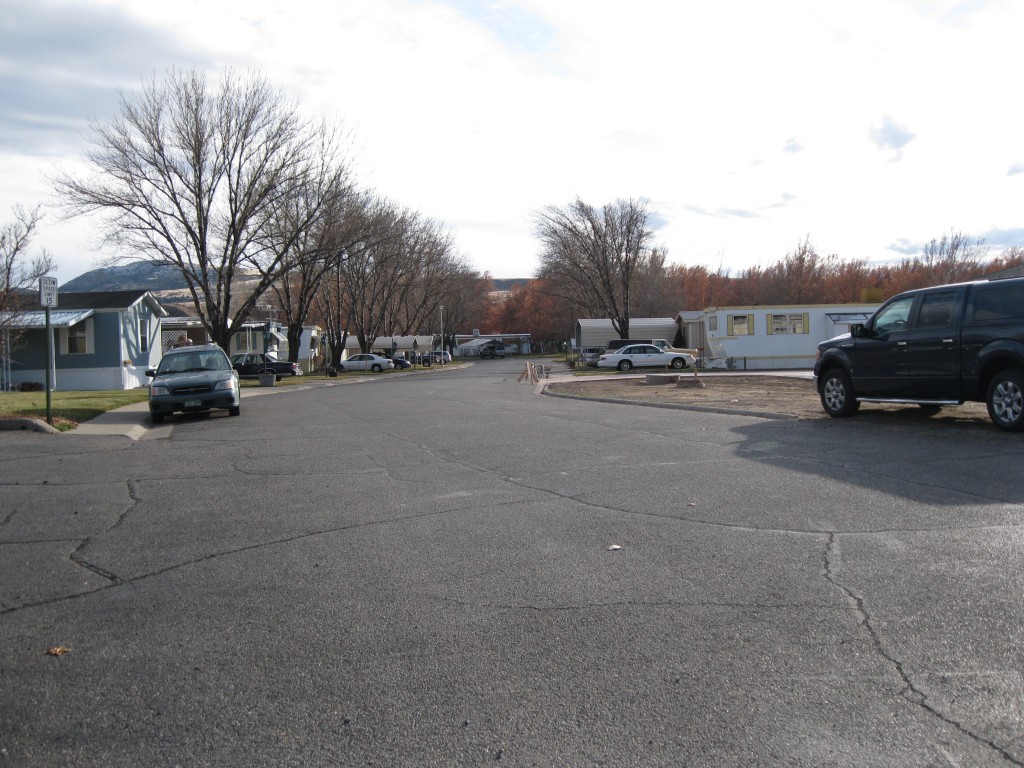 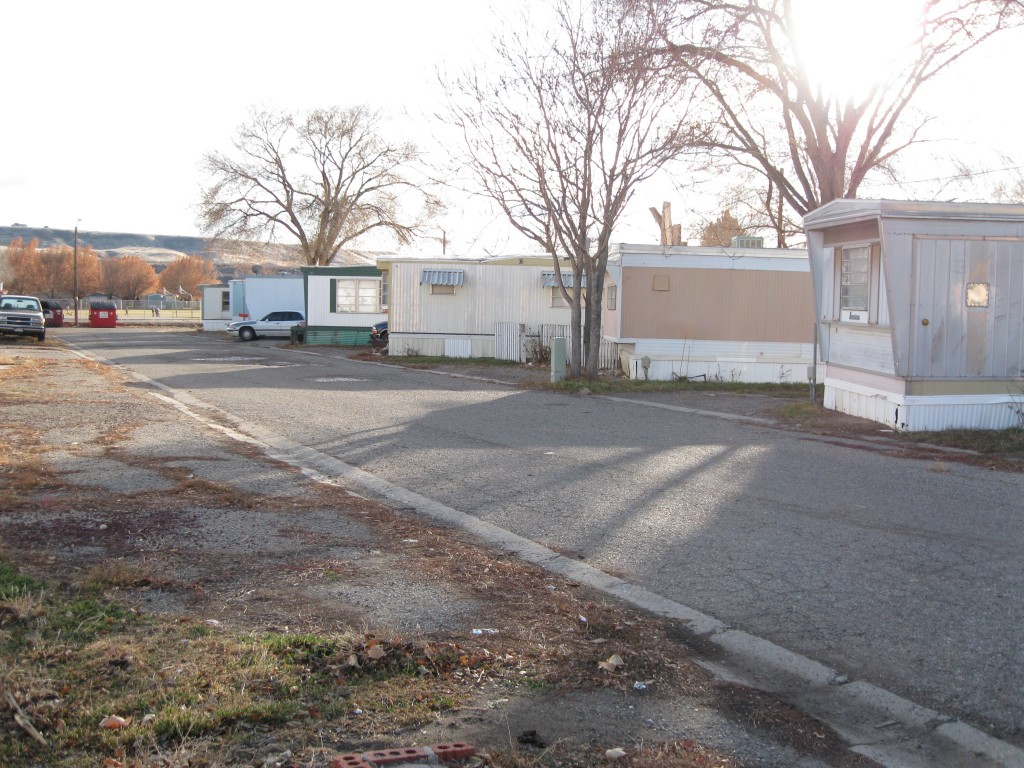 Mobile homes in the Great Homes area are located at 317 West 8th. 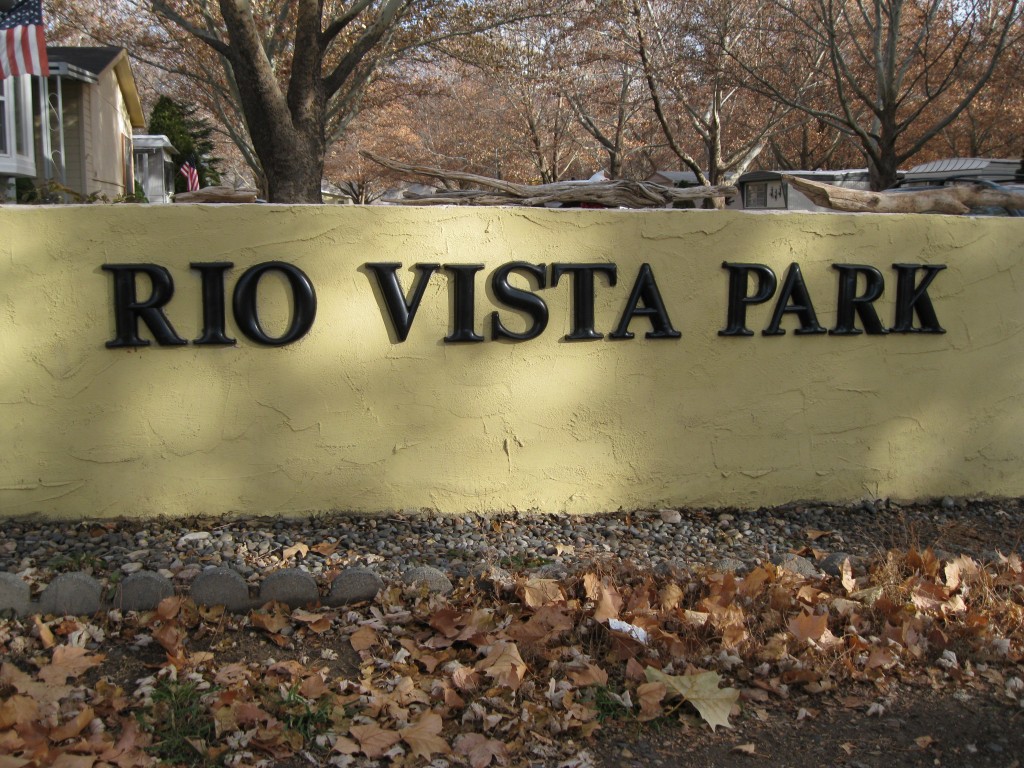