Palisade police present a body-cam model, costs, and use information to town board

Home•Palisade police present a body-cam model, costs, and use information to town board

Palisade police present a body-cam model, costs, and use information to town board

Palisade’s new Police Chief Deb Funston, along with two of Palisade’s officers, put on an informational presentation at meeting of the Palisade Board of Trustees, Tuesday evening, June 23.

Officers Mark Post and Zach Adams presented the Taser Axon Body Cam system as a possible choice if the department decides to adopt a policy of body-cam use. As Officer Post commented, ”It puts ‘them’ on their best behavior, and it puts US on OUR best behavior.”

A short video was shown illustrating a traffic stop in New Mexico that was brought to the correct conclusion only after viewing the officer’s body-cam, which exonerated the officer of an unfounded charge.

Officer Post explained that if the body-cam policy is adopted by the department, each officer would be equipped with their own camera. Since reserve officers would always be riding with an officer, they would not be required to be equipped, although with enough funding, it would be desirable to outfit everyone. Post said that the Taser Axon system could be had for about $400 per officer/system.

The system includes a pre-event buffer, giving the ability to see the 30 second period previous to actually keying the camera on. Although the cameras would be ‘on’ during the time they are worn by the officers, they must be keyed to actually record when desired. Officer Post explained that there is not enough storage to store the results of each shift if the camera was keyed ‘on’ the entire duration of a shift.

It turns out that the original purchase of camera equipment for each officer is only the beginning of the cost of a body-cam program. The more substantial cost of the system is the actual storage of all the data collected.

While many police contacts are non-confrontational and can later be edited and erased from backup, others will need to be kept for the duration of the statute of limitations. The recordings would also need to be edited and categorized, and would be required to be CJIS (Criminal Justice Information Services) compliant for security purposes.

Most regular cloud storage is not CJIS compliant, but the Taser Axon system is not only compliant, but also uploads each officer’s camera data after each shift. It also takes of many of the storage and indexing functions that other systems require the officer to do manually.

It is estimated that secure data storage of the video evidence would cost the Palisade police department about $1,500 – $2,000 per year with a system like the Taser Axon.

Town Administrator Rich Sales informed trustees that an audio system has been in place for the last couple of years, and he would like Officers Post and Adams to research a few more systems in addition to the Taser Axon. The purpose of the evening’s presentation was to let trustees know that research is going on into body-cam systems. Due to increased interest by the public from recent news events across the country involving police officers and use of body-cams, Chief Funston feels it is time to look into the policies and systems.

As Chief Funston assured trustees, the department is still in the information gathering phase of the project, and would later seek permission to look for grant funding if a system was chosen; they were not asking permission that night to purchase a system.

Mayor Roger Granat said that although he sees the benefits of a body-cam system, he also thinks that some of the current problems with their use will be solved with new technologies being developed. He would also like to see more research into some other brands.

Chief Funston has spoken with Police Chief Judy Macy of Fruita about their body-cam system and was told that they are happy with their system, but have run into storage issues due to the amount of time required uploading, indexing, etc., functions that Officers Post and Adams think that the Taser Axon system resolves.

Town Administrator Sales concluded the discussion for the time being, promising to bring more information to the board about the body-cam programs available.

In other town business, citizen Tim Wedel used the Public Comment section of the meeting to express concern over the way the road closures are handled for the downtown Sunday Markets. As a resident and business owner on North River Road property just before heading east out of the town center, Wedel pointed out that the weekly closures of street for Sunday Market had the effect of stifling travel at the east end of Palisade. Since this is also part of the posted Fruit & Wine Byway, Wedel stressed the importance of providing some direction beyond simple “Road Closed” signage to the public. 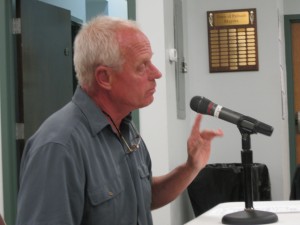 Palisade Community Development Director Ron Quarles also spoke to Wedel’s concern, noting that the planning commission had recently been discussing way-finding signage and that it was already on the agenda for discussion at the upcoming July 6 meeting of the commission. It was suggested that Wedel might attend that meeting as well to speak specifically to the planning commission about his ideas for rerouting or at least re-directing Sunday tourists through the summer season.

Former County Commissioner Janet Rowland, now director of the Court Appointed Special Advocates (CASA) spoke and gave a short video presentation on the CASA program for advocating on behalf of Mesa County’s abused and foster children. She spoke about the continuing need for volunteers to act as advocates, and about how valuable the volunteer position can be for the future of the child involved. 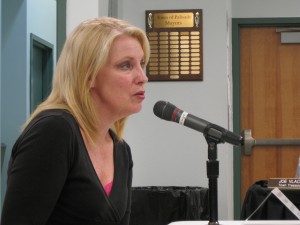 Alex Varas, a frequent attendee of Palisade trustee meetings and a CASA volunteer, also spoke about the needs and gratifications of participating as a volunteer in the program.

Rowland pointed out that the organization works with the magistrates of the court system, with over 75% of their funding coming from the state or from grants and other fundraising.

Michael “Mike” Nelson, CPA from the firm of Chadwick, Steinkirchner, Davis & Co., P.C., spoke on the results of the annual audit of town financial statements. He reported a clean audit, with “no changes or signs of fraud or abuse,” covering both the town’s governmental and business activities. 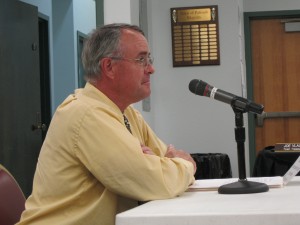 Nelson reported that although cash balances have decreased somewhat, so had the debt load. He reported a very positive ratio of cash to payables, and a slightly higher than usual balance in the ‘reserve’ fund.

Preliminary figures from this year’s Bluegrass Festival are being put together and, so far, show an increase in revenues of over $19,000 from last year, with revenues this year of $217,000. Tickets are already on sale for the 2016 event. Town Clerk Lindsey Chitwood reported on a number of positive comments about this year’s festival, and the fact that there no serious incidents of any kind took place surrounding the event.

The Board adjourned the public meeting at 8:08 p.m. to continue in an executive session. Executive sessions deal with personnel or other matters of a confidential nature where proceedings are allowed by state statute to be held privately.

The next meeting of the Board of Trustees is scheduled for Tuesday, July 7, in the Civic Center meeting room at 341 West 7th Street in Palisade. The Planning Commission will meet in the same room at 6 p.m. the previous evening, Monday, July 6, also at 6 p.m. Both meetings are at open to the public.