Palisade puts on a pretty face

Home•Palisade puts on a pretty face

Palisade puts on a pretty face

The Blue Pig Gallery hosted a reception for the four local artists before the reveal at 5 p.m., attended by a few dozen art enthusiasts and town officials on the warm summer evening. The four pieces are located along Main Street with one on the east side, near the Chamber of Commerce office, and three along the west side.

Four black barrel-shaped pedestals were installed along Main Street last summer during the renovation project as bases for sculptures or other artwork.

A Selection Committee was approved by the Board of Trustees and criteria decided on for artwork selection. The selection committee was kept fairly small, consisting of the Chamber director, one Trustee, the director of the Blue Pig Gallery, a town staff member and two or three members of the local art community to be appointed by the Board of Trustees. The selection committee then solicited donations and sponsors and selected the first pieces for display.

The Town of Palisade has agreed to provide the insurance rider for the artwork, and will also install and remove the artwork on display.

Pieces of sculpture will be displayed for a period of one year, and will be available for sale as well. The selection committee will be responsible for marketing both the program and the artwork, using brochures and print advertising, social media, press releases, etc. They will also be responsible for choosing the next pieces for public display.

If a piece of displayed art is purchased while on display, a percentage of the proceeds will be donated back to the PAV program to help ensure its future. The Town of Palisade will also have the option to purchase pieces for permanent exhibition elsewhere in town.

The size of the sculptures will be limited to the circumference of the pedestal, with no portion of it to protrude onto the sidewalk or street. 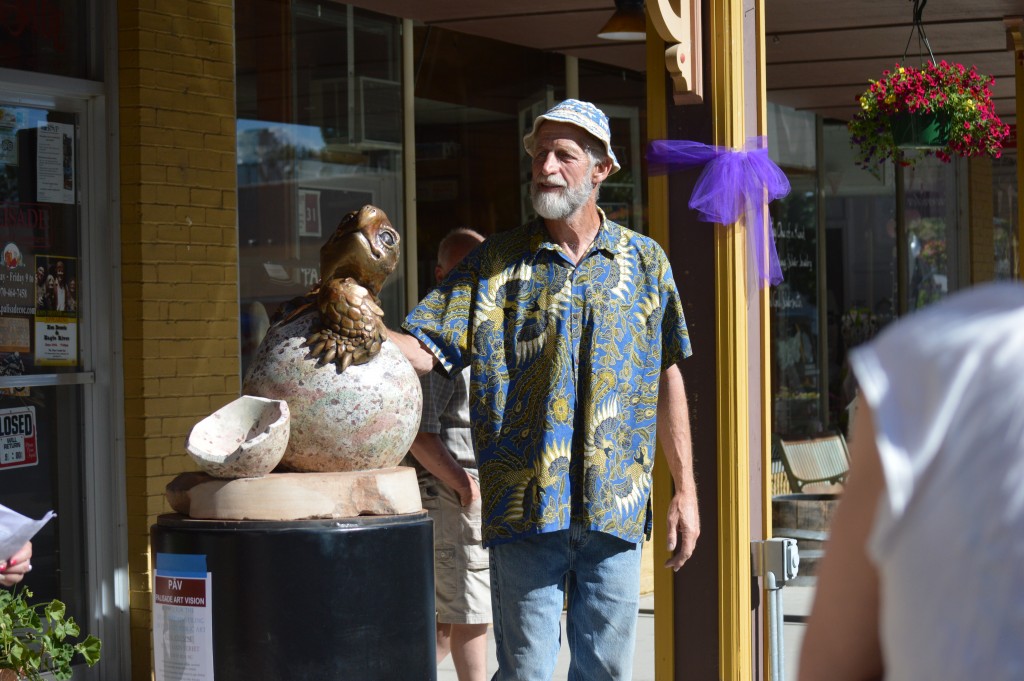 Gary Hauschauz introduces “Penny,” his sculpture of a desert tortoise breaking into the world.

Although Gary is North Dakota born, he grew up in Aspen and Denver. A childhood illness required lots of quiet time indoors for a couple of years, and Gary took advantage of the time to develop an interest in drawing. He studied art in college, and also became involved in competitive swimming to improve his health. When offered a position on the western slope that involved teaching art, and coaching swimming, he figured it couldn’t be a more perfect fit.

Gary has since completed a master’s degree in visual art, and since 2010, has been able to devote his time to art. His interests include sculpture, ceramics, printmaking, painting and mixed media.

Gary’s painting done with different types of wine was chosen as the official poster of the 2012 Colorado Winefest, and he has done a number of other paintings using wine as the medium instead of paint.

Gary has pieces on display as part of the Broomfield Public Art Permanent Collection, the Boulder City Public Art Scape, and the sculpture “Which Came First, Dinosaur or Egg?” is currently on display at St. Mary’s Medical Center in Grand Junction. 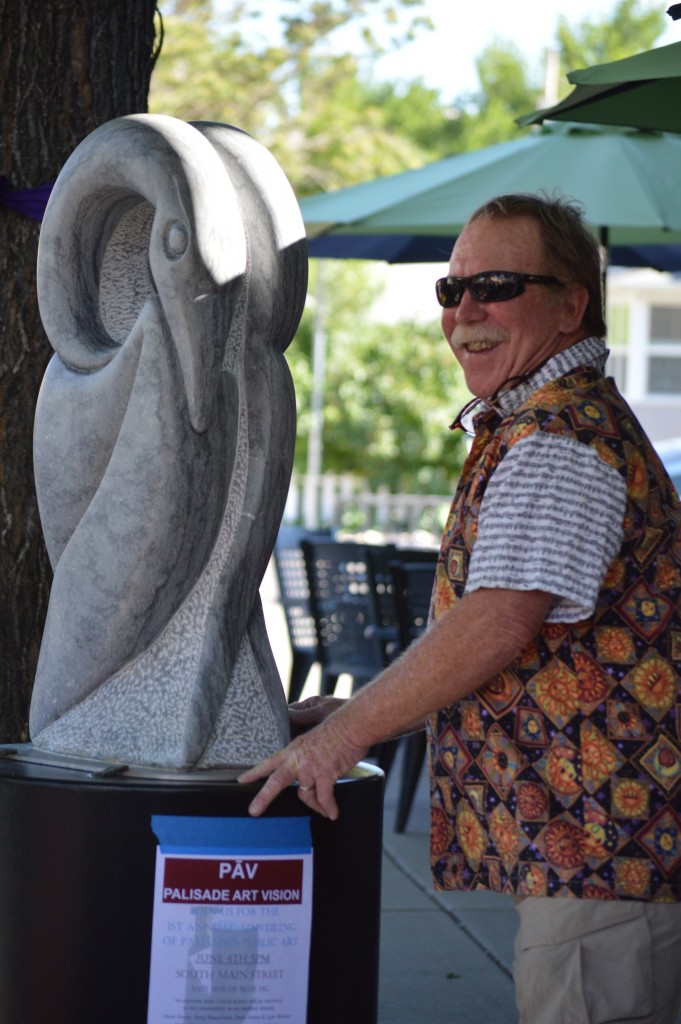 Steve Kentz placed his pair of graceful birds on the sidewalk in front of Inari’s Bistro.

Steve Kentz is a resident of East Orchard Mesa, and you can tell when you pass his place by the variety of sculpture in the yard and orchard. A lifelong Colorado resident, Steve is also an avid rock-climber, and the influences of the native stone inspire his sculpture.

Steve spent his ‘work life’ as a stonemason and concrete finisher, adding to his knowledge and skill at working with natural materials. He attended the first Marble/Marble Symposium in 1989; working with world-class sculptors on the beautiful white stone of Marble, Colorado.

Steve continues to study art, and currently has pieces in the Carbondale Public Art Collection; “Hanging in Limbo,” a collaboration with glass artist Shannon Muse, and a solo effort known as “Namaste.” 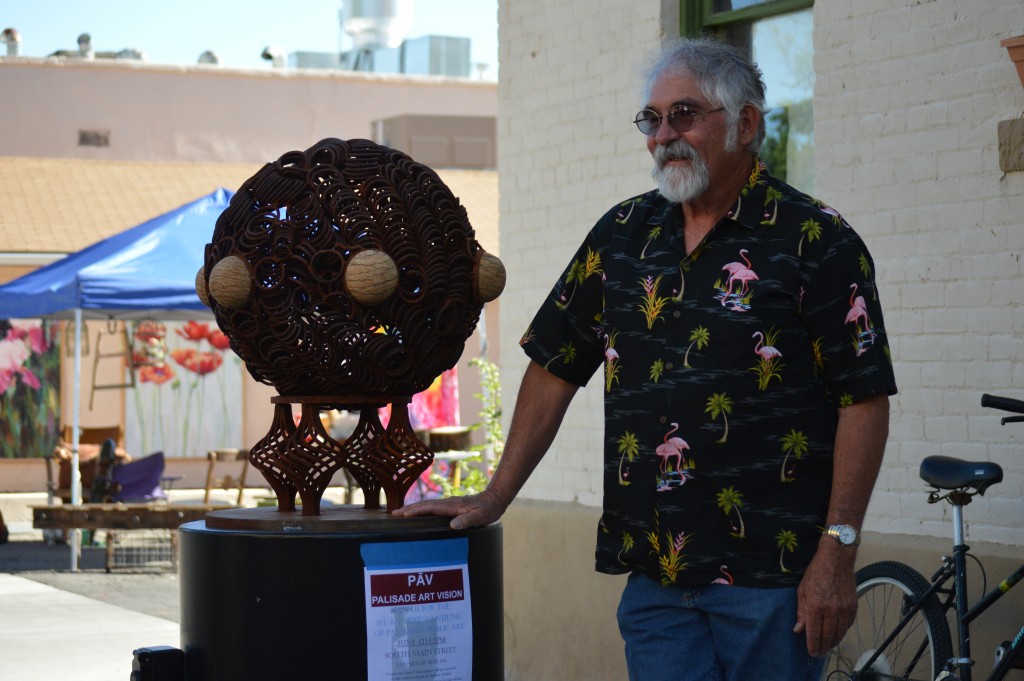 Lyle Nichols is a well-known local artist, or at least a number of his pieces are well-known… there is “Rusty’s Dream,” in the yard of the Colorado National Bank of Palisade, the “Chardonnay Chicken” and galloping horse at the Plum Creek Winery, and “Harley,” the large fish on display in Palisade’s Town Plaza, made from motorcycle mufflers.

Several of Lyle’s creations are also on display in downtown Grand Junction as part of their “Art on the Corner” project. He also makes smaller pieces, such as granite ashtrays known as ‘match-strikers’ due to a rough patch on the interior bowl of the ashtray for lighting the match.

A Grand Valley native, Nichols takes pleasure in using local materials for his projects, whether it be the giant granite countertop he shaped for Carlson’s Vineyard or the old rusty tools and pieces of farm equipment that were welded into Priscilla Walker’s horse. It’s so real, it almost looks like she could ride it! 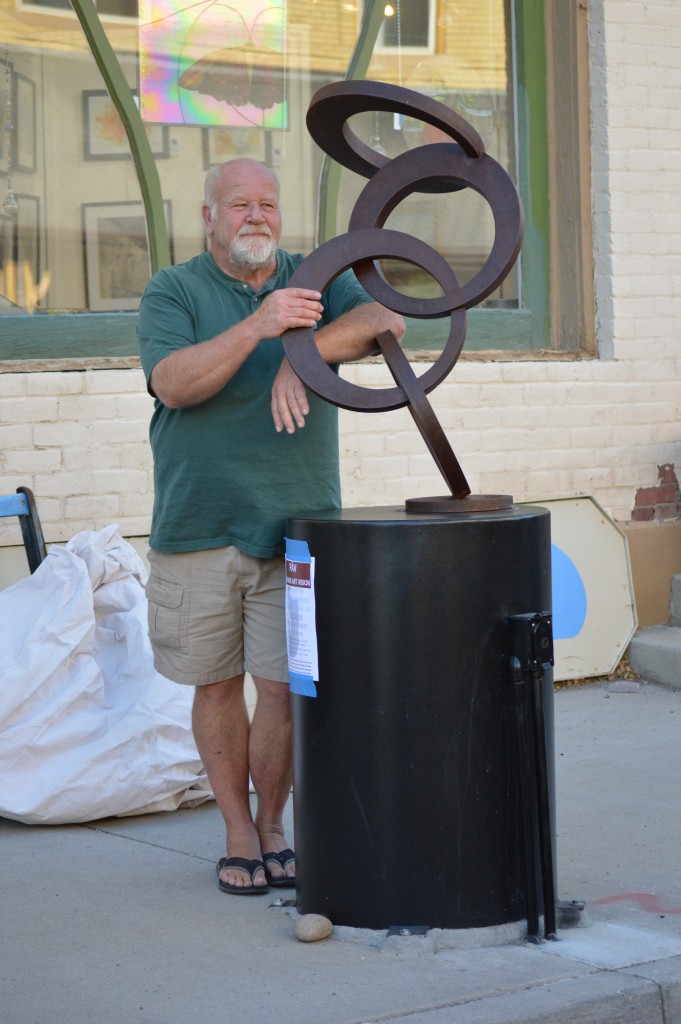 Grand Junction artist Dave Davis has been active in public art programs, helping to get Grand Junction’s “Art on the Corner” off the ground years ago.

Dave Davis is a well-known painter and sculptor that originated the “Paint the Piece” pubic art project in Grand Junction about five years ago. It features one 5 x 5 foot canvas that is continually painted and repainted by community groups and individuals with something to say. So far, he counts 61 individuals and over 200 times that the canvas has been painted so far. He has an interesting request for the piece; Davis would like it to be painted again and again throughout his life, then when he is gone, he wants the piece to be mounted on the south side of a building in direct sunlight so everyone can see the various layers and paintings wear through with the passage of time… an interesting idea, for sure.

Davis was also one of the founders of the “Art on the Corner” in Grand Junction, so it was fitting that he was chosen as one of the inaugural artists in Palisade’s public art program.

Organizers of Palisade’s Art Vision are excited about getting the program off the ground, and are happy to accept contributions toward providing more art for the public enjoyment.