“Thanks to Palisade for being such a great team player.  We owe you one,” Lori Buck, mayor of Fruita, promised in her remarks on Saturday, September 5, to more than 150 people at the grand opening ceremony for the Monument View Trail section of the Colorado Riverfront Trail, held at the Walter Walker State Wildlife Area.

“I heard the Fruita mayor’s promise,” Bennett Price, Palisade town trustee, replied in his remarks.  Price is also an ex-officio member of the Colorado Riverfront Commission.

Speaking to the crowd, Price said, “We in Palisade are very proud to be co-partners,” in development of the bike, pedestrian, and jogging trail.  Price said he also looks forward to the development of trails around a sports shooting range proposed at Cameo east of Palisade by the Colorado Division of Parks and Wildlife.

In his remarks, Price drew laughter when said that the last time that he was on a bike was in 1975.  He said the ride that morning to Fruita was downhill, easy, but coming back it was ‘all uphill from Fruita!”  Price rode a sturdy Palisade Police Department patrol bike. 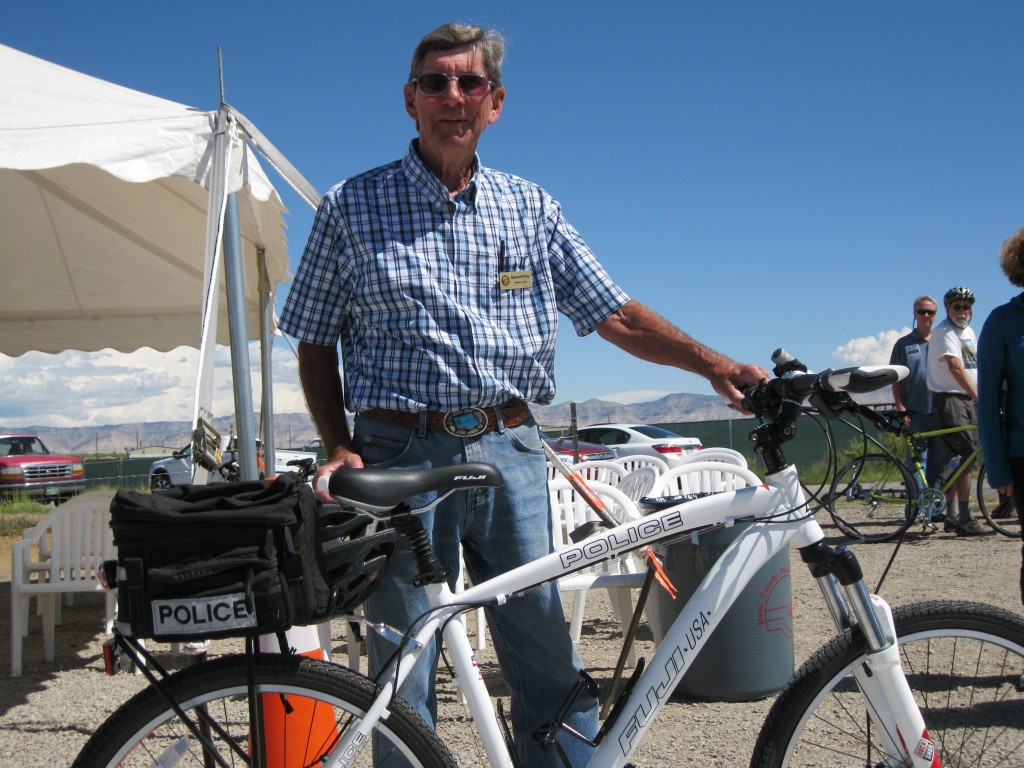 Bennett Price, Palisade town trustee, rode a sturdy Palisade Police Department patrol bike to Fruita and back to the new section of the Colorado Riverfront Trail.  The new section was dedicated on September 5.

The ceremony was held on a sunny, late summer day surrounded by views of the Colorado National Monument’s rugged canyons, clouds against a cobalt blue sky, and the vertical Book Cliffs to the north.  The trail passes through natural grasses and cottonwood trees near the river in the Walter Walker State Wildlife Area.

The one-hour ceremony was held on the trail four miles east of Fruita and four miles west of Grand Junction.

The question of connecting Palisade to the river trail was raised by a number of speakers.  Brad Taylor, co-chair of the Riverfront Commission, said at the ceremony that the vision for the trail sees the trail reaching Palisade.

The two sections that remain to be completed are at the west end of Riverbend Park in Palisade and a section in Grand Junction, according to the commission.

There are 15.6 miles of trails, including those along the Gunnison River, Taylor said.  “That is a great accomplishment,” over 27 and ½ years.  “There is still more to be done,” he said.

“The commission has been unsuccessful in securing the easements needed for trail construction, but has been working cooperatively with both the land owners and other involved entities to resolve issues and minimize safety concerns,” the commission states on its website.

At the dedication, County Commissioner Steve Acquafresca told the audience that GOCO (Great Outdoors Colorado lottery) has been the greatest financial contributor to the first three phases of the trail system.  A portion of the proceeds is used “to preserve, protect and enhance the state’s wildlife, parks, rivers, trails and open spaces,” the GOCO website states.

“We are committed to continue to help as Mesa County continues this project,” Tom Birk, a director on the GOCO board, told the crowd.

Costs for all three phases of the trail have been $6.8 million, with only 10 percent of it taxpayer dollars, one speaker said. Funding included grants.

Hudspeth & Associates, general contractor for construction of the trail, states in a handout that the new section contains 4.19 miles of concrete trail.

Historically, the first attempt to start a trail system occurred in 1973 when a greenbelt association was formed, according to the commission website.  But, it wasn’t successful.  The Riverfront Commission, however, began in 1987.

Speaking at the ceremony, Sean Yates, Colorado Department of Transportation, said, “vision and determination created (the trail), a significant piece of transportation infrastructure,” part of which occurs in the Interstate 70 right-of-way.

Speaking about the full trail, Grand Junction City Council member Bennett Boeschenstein noted that parts of the trail also provide a route for children to walk and bike to school.  He added that CDOT foresees development of a trail route linking Moab, Utah, to Glenwood Springs.

Boeschenstein compared the linking of segments of the trail to the connection of the first transcontinental railroad route in Utah.  Boeschenstein said the Union and Central Pacific Railroads joined rails in Utah in 1869.  He recalled that he visited the Golden Spike National Historic Site in August.

At the trail dedication, he held up a symbolic golden spike, and said, “Let the spike be driven!”  Then, at 12:10 p.m., Riverfront Commissioner Taylor declared, “The trail is open!”  Applause, shouts, and whistles followed. 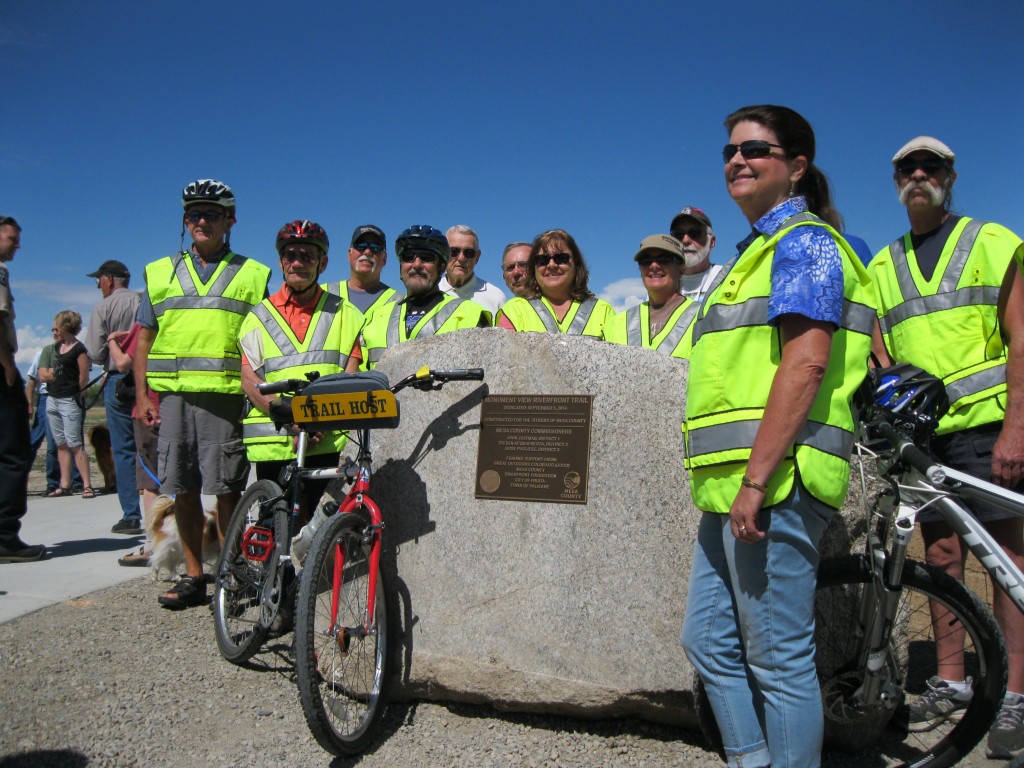 Asked about the future for the trail in Palisade, Dave Grossman, coordinator of the Grand Valley Trails Alliance, said in an interview on the trail, “Hopefully, we’ve built momentum,” adding, “People like a winner.”  They will “build on what we’ve already accomplished.”

Grossman said, “This diverse range of people here (at the dedication) will help in the process.”

Grossman noted that he was in charge of the second annual Grand Junction Off-Road mountain bike event this Labor Day weekend.  Mountain bikers traveled 15 to 40 miles of technical trail outside Grand Junction, starting and ending on Main Street.

Grossman said completion of the riverfront trail “will help on so many different fronts,” and people will ask, “Why not a connection to Palisade?”

Grossman observed, “We need to be thinking of the whole Grand Valley as a community.  We talked a lot about Palisade.  We think it’s the next frontier in biking.”

He praised the Palisade Rim Trail.  “Palisade is a gem that will be discovered,” saying Palisade has the trails, and therefore has the potential as, “A new Fruita,” long known as a biking capital. 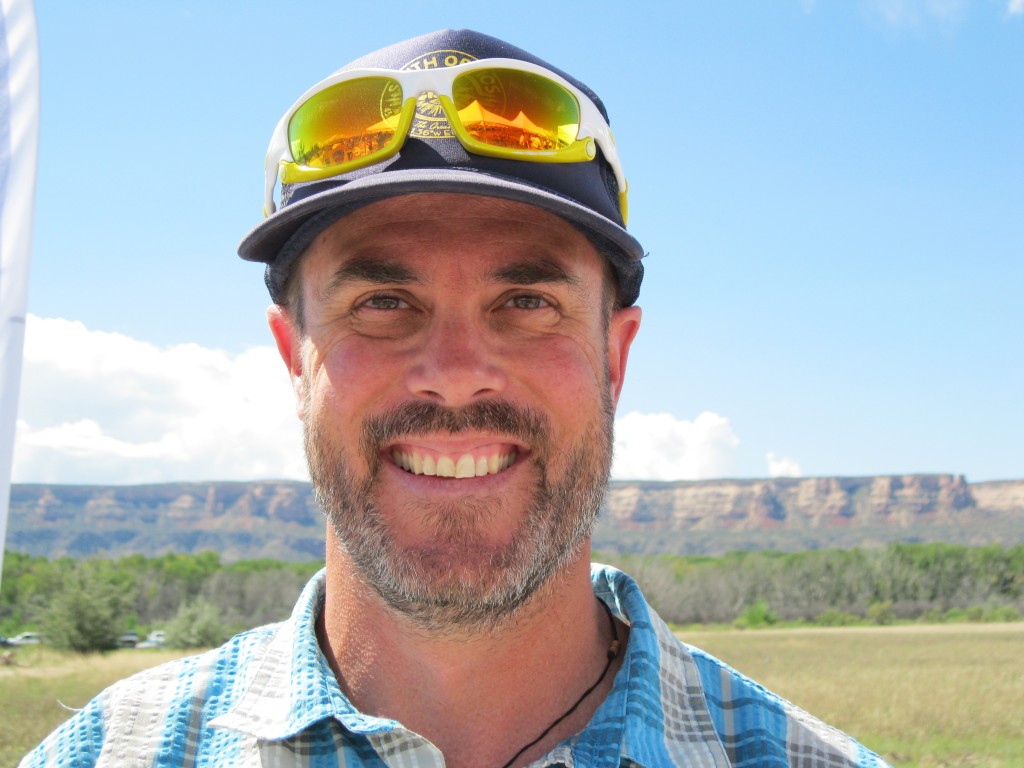 The the Colorado Riverfront Commission states on its website that the trail provides recreation for walkers, bikers, skaters, joggers and fishermen.

“The trail system celebrates and preserves the cottonwood groves, wetlands, cattail marshes, gravel bars and islands of the Colorado (originally the Grand) and the Gunnison Rivers.

“This rich and diverse environment is home for over 200 different species of birds, three endangered species of fish and an abundance of small animals,” the commission observes.

By Peach Town News|2014-09-09T20:42:28-06:00September 9th, 2014|Government|Comments Off on Palisade recognized at dedication of the Monument View Trail section of the Colorado Riverfront Trail