Yippee!!! I can hear songbirds outside the bedroom window in the morning again. It’s finally spring, and nothing motivates me more than a couple extra hours of sunshine each day. We’re about to start into the festival season with the Honeybee Festival just a week away, and we’re off to the races! I’m counting the days till Bluegrass in June, and also looking forward to the second annual Brews and Cruise at the beginning of May. The fruit tree blossoms are beautiful, as always, and the rest of the trees are greening right up too. Just typing this makes me smile…

After receiving a copy of the post at VettheGov.com that was circulated around Palisade this week, I was disappointed to find that, while I have no comment on any of the Town’s personnel issues, it is my recollection from attending most trustee meetings that information provided on some of the other topics in the post seems to be either incorrect or incomplete. To clarify…

Trustees did, however, provide a much safer path for the kids to get to Taylor by purchasing and re-landscaping the property to the east of the old Packing Shed restaurant, and relocating the crosswalk as well, to limit the children’s exposure to known sex offenders living in the vicinity. Although it required reworking some budget items to afford the purchase, trustees felt that the children’s safety was their top priority. That wasn’t mentioned in the post although it was planned for, budgeted, constructed, and opened for use, all of which was discussed at various trustee meetings as well as reported on at PeachTownNews.com. 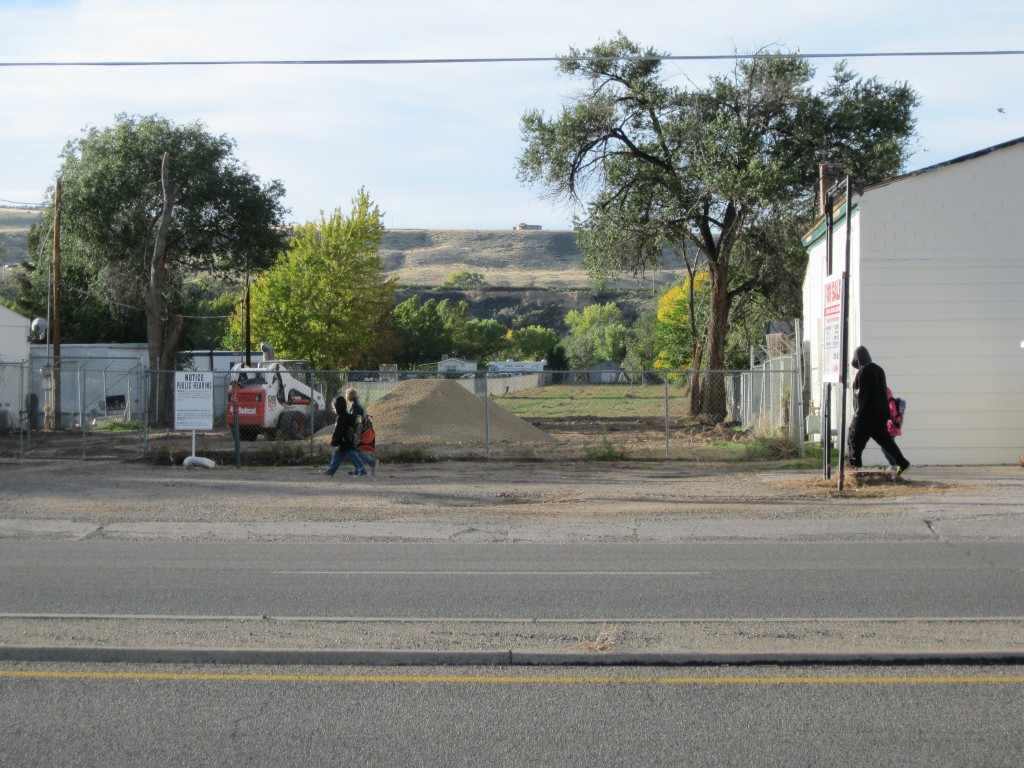 The old house was torn down, and basic landscaping done to the property for a safer route to Taylor Elementary for Palisade kids.

On the subject of the old high school building, the remodeling schedules, setbacks, problems, plans and possibilities are often discussed at trustee meetings. There is nothing secret about the fact that the cost of unexpected asbestos abatement procedures exceeds the remodeling funds available. Systems already installed as a part of the remodel are currently in use in the remodeled gymnasium. Both the solar panels and the HVAC systems are operational and are currently in use. As a matter of fact, their use actually offsets some of the operating costs of opening the gym to the public. This is discussed often, and always with regard to the budget. No secrets, just unexpectedly expensive asbestos.

There was criticism in the VettheGov.com post of the mayor and the town administrator for “spending lots of time together lately,” suggesting “secret meetings.” I looked up the statutes to be sure, and found that C.R.S. 24-6-402 (as referred to in their post) states in section 2.b. that “All meetings of a quorum (4) or three or more members of any local public body, whichever is fewer, at which any public business is discussed or any formal action taken must be open to the public” per the state Sunshine Laws. That very clearly allows for regular meetings between the mayor and town administrator (less than three people). If three or more of the trustees or staff were meeting about town business, there would be a 24-hour notice posted announcing a public meeting, per the statute.

Liquor license renewals are completely the responsibility of the license holder, when all is said and done. The State of Colorado sends a courtesy ‘reminder’ annually when the license comes due, and the follow-through is entirely up to the license holder. Period. Every liquor license holder knows this. The actual license is required to be posted visibly in the establishment, which is how the state inspector saw that Inari’s license was more than one year in arrears when he pulled it (the town did not pull Inari’s license). The expiration date must have been just as visible to Mr. Izumi as it was to the inspector. Most responsible business owners keep a schedule of important licenses and renewal dates and check it regularly. There is hardly a more important license for a restaurant owner to keep track of than their liquor license.

Selling out to marijuana and alcohol? Does this mean the town should not promote ALL of Palisade’s products and businesses? What about our award-winning distillery, and all the fantastic area wineries and vineyards? Is Palisade only allowed to promote peaches? What would happen if a peach grower decided to cut down his own trees to plant wine grapes, or build a dirt bike track, or just to watch the grass grow? Would there be protests?

Although promoting winemaking and a distillery might be seen as selling out to alcohol, Palisade can also boast of its hiking and biking, Colorado Winefest, Bluegrass, Brews and Cruise and numerous other festivals, art galleries and opportunities, and the Fruit & Wine Byway. We celebrate Honeybees, our Outdoor Heritage, Quilting and the Fiber Arts, Alpacas and Lavender. All that and more in addition to the one and only Palisade Peach Festival each summer make Palisade a great place to visit, and especially to live.

One of the Peach Festivals signature events, the peach eating contest, always draws plenty of participants.

Palisade peaches are our wonderful heritage, and we have so much more to offer in addition. Agriculture includes many different crops and practices, and agritourism, as it is defined most broadly (by Wikipedia), involves any agriculturally based operation or activity that brings visitors to a farm or ranch. Not just peaches. They may be our specialty, but they’re not Palisade’s only attraction any more. If everyone could work together, we could go a lot farther to promote Palisade for the benefit of all.

Why not show up at a trustee meeting and ask some questions if there are things you’re concerned or upset about? There is a section of each meeting where citizens can ask/speak about anything not on that evening’s agenda. Meetings are on the second and fourth Tuesdays of each month at the Civic Center in Palisade, 341 W. 8th Street, at 6:00 p.m. sharp.

In the interest of transparency, in addition to being a contributor to PeachTown News and a ferocious supporter of all things Palisade, Betsy McLaughlin also sits on the Palisade Planning Commission.