Presentation of the ‘Complete Streets’ policy, adopted by Palisade Trustees in July, 2015, was made by Public Works Director Frank Watt at the Tuesday, August 11, meeting of the Palisade Board of Trustees at the Palisade Civic Center.

Explaining that he would be making the presentation the next day to the Grand Valley Transportation Technical Advisory Committee, Watt outlined to trustees just what a ‘Complete Street’ encompasses. Safety, both vehicular and pedestrian, as well as landscaping, lighting, crosswalks, bikeways and other aspects of a transportation corridor were highlighted, as well as the general goals of the policy with regard to future planning, as well as the current situation.

Since the community participated in a detailed study (2012) of how they would like to see Highway 6 developed through Palisade, those goals and desires have been included in the Complete Streets package. “If CDOT is looking to spend a lot of money on Highway 6, I don’t want them to make it three lanes wide in both directions just to get cars through Palisade as quickly as possible,” said Watt.

Also discussed were possible future improvements to North River Road, including a bike lane, or at least, a wider shoulder on the roadway for cyclists. Watt has had two conversations with the county already, proposing the addition of a 2 ft. lane on each side of the road instead of a 4 ft. lane down one side, increasing cyclist safety. Watt pointed out that the county would probably need some contribution from the town toward the improvements, a consideration for next year’s budget.

Watt also mentioned the possibility of CDOT making improvements to the dangerous curves on I-70 just east of Exit 44 in the near future. He pointed out that if we have a plan already in place, we may have an opportunity to create a bike path from North River Road to Cameo and beyond to Island Acres during the CDOT construction process on some type of cost-sharing basis.

Possible improvements to Elberta Avenue from I-70 to Highway 6 might be considered, as well as on G 7/10 (First St.), attempting to direct more traffic to our downtown area.

Mayor Pro-tem David Edwards asked about the possibility of improving the safety of a bike lane on the south side of Highway 6 between Palisade and 36 ¼ Road. He pointed out how narrow the space is for cyclists, especially around the high school and intersection with G Rd. He also cited increased use of the bike lane by orchard workers, students, and recreational riders lately.

Palisade Town Administrator Rich Sales explained an email received by trustees from a Mesa County commissioner and a Grand Junction city official regarding the Grand Valley Drainage District and the relationship to the Federal Mineral Lease Grant program. There is no current consensus on a complete stormwater drainage plan for Mesa County.

Mayor Pro-tem Edwards thinks it is premature for the Town of Palisade to support a particular position; mainly wanting stormwater 100-year events to be prepared for adequately by the plan. Mayor Roger Granat agreed with Edwards, and thinks the town should take a ‘wait and see’ approach at this time.

He requested permission to apply for a $40,000 grant, explaining that it does not require a cash match, but will show an in-kind match for engineering and construction. Trustees agreed to pursue the grant.

Also on the evening’s agenda was approval of a resolution to proceed with a program of wayfinding signage, discussed at many of the last months’ meetings of the planning commission.

The Town of Palisade received a matching grant from the AGNC (Associated Governments of Northern Colorado) to use for providing improved wayfinding signage in the amount of $5,900, to be used by the end of the year for construction and erection of the signs. Quarles is working with a signmaker and with CDOT to make sure to stay within the budget and timeframe, beginning with 6 signs and poles.

Community Development Director Ron Quarles showed slides illustrating the new design and color palette for the signage, describing where they would be placed as well as sample destinations. Internationally recognized symbols for food, lodging, gas, etc., will also be used on the signs.

The resolution was approved unanimously, with additional board comments recorded.

Acquisition of a new police vehicle was proposed.  Sales explained that one of the vehicles previously in use had met with maintenance problems that made it cost prohibitive to repair, so another vehicle was needed.

The proposed new vehicle would be an SUV, instead of the Chargers and Impala currently in service.

Palisade Treasurer Joe Vlach explained the lease process that most departments are now using, as well as the reasoning behind moving to SUVs instead of the sedans.

Police Chief Deb Funston explained her process for choosing the SUV, citing the multi-purpose nature when compared with a sedan. The Humvees obtained by previous chief Tony Erickson are not suitable for regular, daily police use at this time.

The proposed lease was approved, with the old vehicle being put up for sale to help offset the new costs.

Treasurer Vlach reported on the state of the town’s finances, announcing that “It hadn’t been the greatest year, but we are financially strong.” Cash reserves are low at this time, mainly due to the Main Street reconstruction just completed, but additional revenues are expected in the next couple of months from the Palisade Rural Fire District as well as a large payment from GOCO to help offset the reconstruction.

Vlach said the Department of Local Affairs (DOLA) will front the amount necessary for the purchase of the Cameo property for the Sport Shooting Complex, so there will be no cash crunch for the Town of Palisade to get the property sale completed.

Public Works Director Watt reported that work had begun on the Bike Skills park being constructed at the east end of Riverbend Park. Boulders have been moved and dirtwork is being traded out with the construction crews on 38 Road, in the preliminary steps toward the Skills park. There was a break in the construction during PeachFest and there will be again during WineFest, otherwise construction will proceed with completion expected by the end of September. 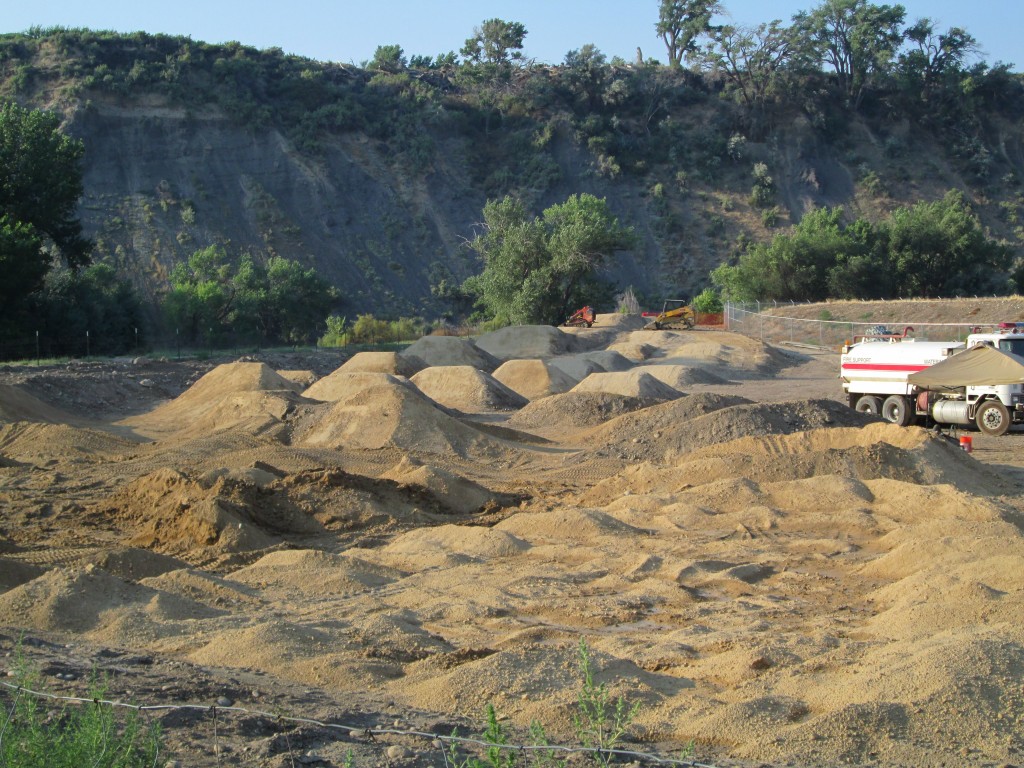 The mounds of dirt at the construction site of the Bike Skills Park, seen on Aug. 20, will be groomed for future bike recreation.  (Photo by Bill Hoffmann)