At the Palisade Town Board meeting on June 9, four individuals were recognized in honor of their recent successful life-saving efforts.

The Phoenix Award recognizes individuals “who, through their skills and knowledge, have successfully revived an individual known to have been in cardiac arrest,” the award states.

At the meeting, Palisade EMS (Emergency Medical Services) Chief Joe White presented the award to the recipients and described some of the rescues they completed.

Also at the meeting, the board approved a rezoning request, approved a donation of $500 to the Palisade High School Band Program, congratulated Deb Funston on her promotion to police chief, and voted to adopt the 2015 Mesa County Hazard Mitigation Plan.

By a vote of six to one, the trustees voted to approve a request to rezone the building at 695 Brentwood Dr. from commercial business to mixed use.  Trustee Bennett Price cast the dissenting vote. 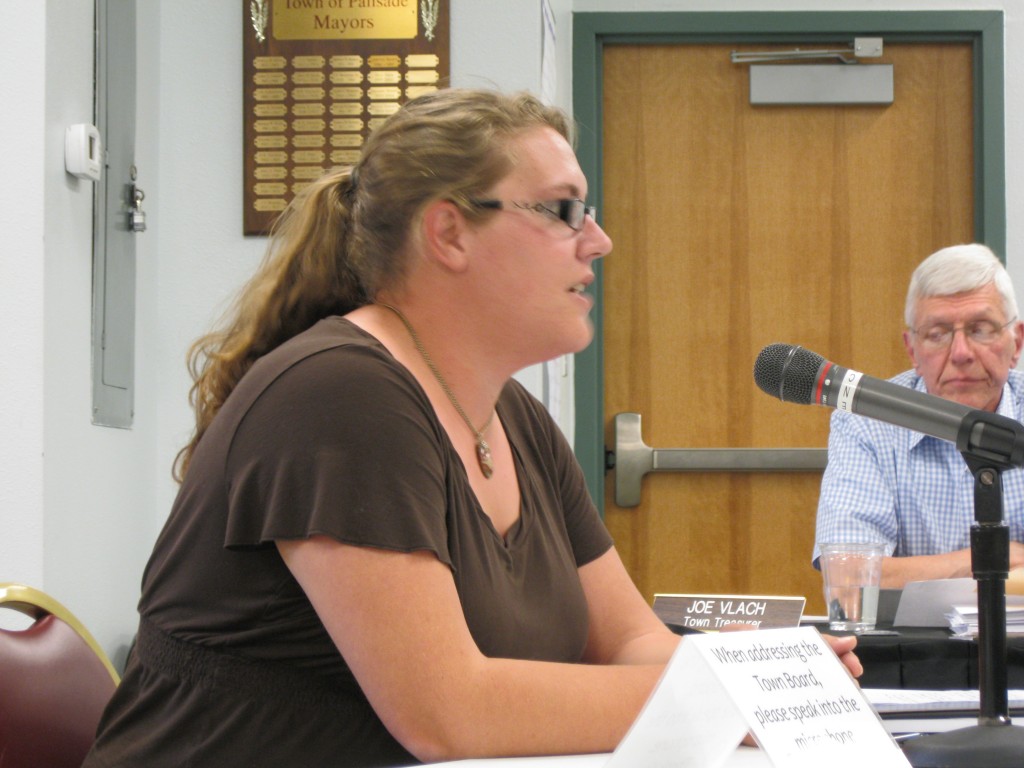 The trustees voted unanimously to donate $500 to the Palisade High School band program.  Keli Fraser, speaking on behalf of the program, thanked the board for last year’s donation of $500 and sought a new donation.

After the vote, Trustee Price asked that the board look at next year’s budget for donations to such community organizations, such as Colorado Mesa University.

At the meeting, Trustee Penny Prinster congratulated Deb Funston on her promotion to police chief.  Chief Funston said, “It is quite an honor.  I appreciate it.”  It was noted that there is also a female police chief in Fruita.  Funston said that 14 percent of the police officers in the nation are female, while only 1 percent is a chief of police.

The town announced on June 8 that Police Chief Tony Erickson decided to leave his position with the Town of Palisade to pursue other opportunities.  Funston had been serving as interim chief.

At the town board meeting on June 9, trustees approved adoption of the 2015 Mesa County Hazard Mitigation Plan.  It followed a presentation about the plan by Andy Martsolf, Mesa County emergency manager, seen here.

Trustees approved adoption of the 2015 Mesa County Hazard Mitigation Plan following a presentation about the plan by Andy Martsolf, Mesa County emergency manager.  Trustees added the term “erosion” to the hazard categories in the plan.  Their concern focused on potential erosion along steep river banks in Palisade.

Martsolf explained that the plan is a compilation of natural hazards, such as flooding, and how officials could reduce their risks and dangers.

Trustees reached a consensus to support moving ahead on county-wide discussions to examine formation of a Greater Grand Valley Drainage district or authority.  Discussion would include legal structure, public outreach, a possible ballet issue, and potential implementation in January 2017.

“How to deal with natural drainage is a huge issue,” Frank Watt, Palisade public works director, told the board.

By consensus, the trustees supported a grant request by the Mesa County Fairgrounds.

Town Treasurer Joe Vlach in his report to the board noted that the budget of the Palisade Rural Fire Protection District will soon be included as part of the town budget.  Vlach said he has obtained approval and he pointed out that it will save money.

Mayor Roger Granat reported that the Tourism Advisory Board (TAB) met earlier in the day and it is considering ways to increase revenue for TAB.  The board conducts marketing promotion for the area and is funded through a lodging fee.

The two hour trustees meeting was held at the Palisade Civic Center, 341 W. 7th St.  The board normally meets the second and fourth Tuesdays of the month.  Agendas are posted on the town website.  Meetings are open to the public.