PIP&L meets for final meeting of 2018

Home•PIP&L meets for final meeting of 2018

PIP&L meets for final meeting of 2018

Members of the Board as well as a couple of interested citizens met last Thursday, November 15 for the final 2018 meeting of the Palisade Irrigation Pipes & Laterals. The PIP&L provides a delivery system for irrigation water within the Town of Palisade to citizens wishing to replace their more expensive domestic water for irrigating lawns and gardens.

Chair Patrick McAllister announced that the regular monthly meetings will be suspended until February, meeting next on Thursday, February 21, 2019. There has historically not been any activity during this winter period, so it seems like an extra burden at this time to call a meeting with no activity to discuss. PIP&L will, however, be holding the regular annual meeting for members and interested citizens in March. The General Membership meeting in March is the only time possible to amend or change any of our by-laws or rules. Pat does not anticipate any changes, but any new ideas can be discussed at the February 21 meeting.

Also anticipated is a discussion on attracting new members. Although PIP&L was able to increase capacity with the improvements last summer to Iowa St., it was completed so late in the year that people may not have really had a chance to realize the benefits of membership in the PIP&L.

Pat also reported that PIP&L tried unsuccessfully to increase pressure in the Iowa lateral by adjusting the headgate flow as well as closing off some of the lower valves, but didn’t end up being able to increase pressure by much at all. It is thought that the new six-inch pipe is so much larger than the old one that there isn’t any additional pressure build-up from the silt that used to collect in the old pipe and constrict the flow, increasing the pressure.

Pat also encountered an upset prospective user when the water was shut off in October as they had just installed new landscaping and required irrigation to get things properly rooted. Luckily, October was extremely wet and the rain saved the day. The prospective user was satisfied, deciding to become a member of the PIP&L. 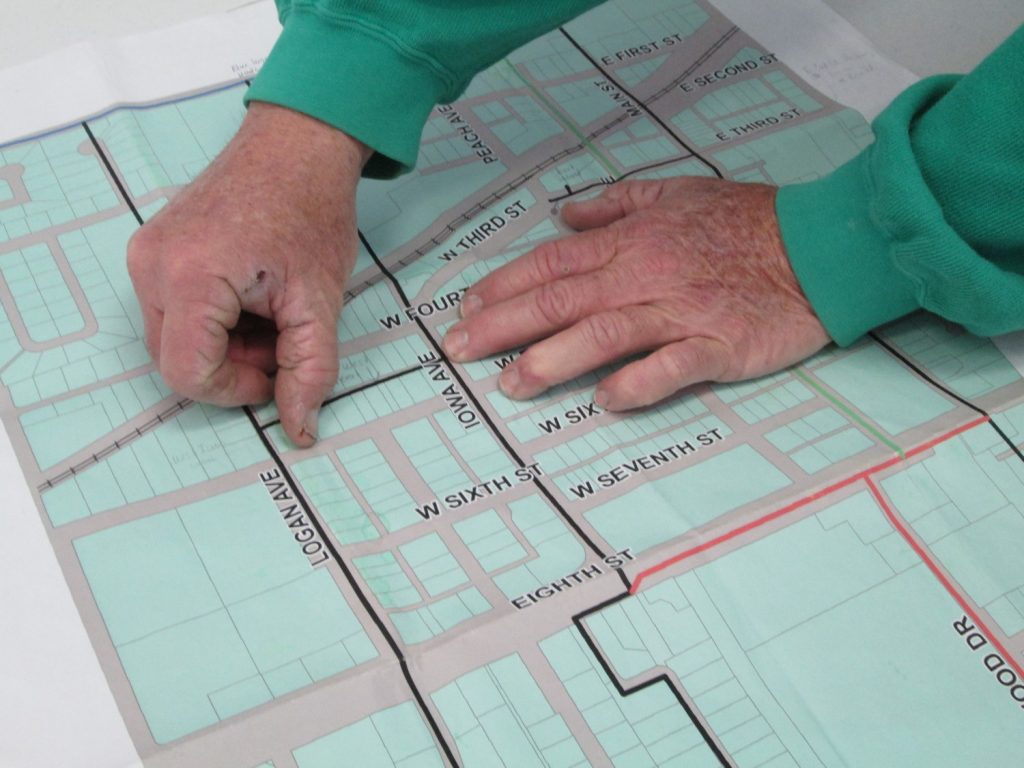 McAllister uses PIP&L’s ever-expanding mapping of the irrigation system to illustrate where a repair was being made. Photo by Bill Hoffmann

There was also accidental damage to a riser in the alley between 4th and 5th from Iowa. Since it was leaking into the alley, Pat went ahead and made a repair with a cast-iron piece ($150) that would also prevent any future damage.

Pat also discussed the ‘Quit-Claim Deed’ and the Membership Agreement for new users, stressing the importance of getting new users to see the value of membership. Since the PIP&L has now located the valves in public rights of way instead of on the user’s private property, PIP&L can shut off irrigation water if necessary; if users refuse to join the PIP&L or pay the $100 annual dues.

Pat also explained a suggested fix for a possible future problem regarding the new Iowa lateral. Due to construction circumstances, there is a low spot where it is thought that water could collect even after the fall shut-down, thereby posing a danger of freezing and bursting the new irrigation pipe. After researching a few other options, Pat suggests using a domestic (trailer and RV-safe) anti-freeze and filling the low spot in the pipe. Members agreed and approved the procedure.

The next meeting will be at 6:30 p.m. on Thursday, February 21 in the Veterans Community Center. Interested citizens are always welcome.

Please visit the website of the Palisade Irrigation Pipes & Laterals at https://pipandl.wordpress.com/ for more information on the organization.