Members of the Palisade Planning Commission met on Tuesday, January 7. Meetings were previously held on the first Monday of each month, but members had agreed to the adoption of an ordinance late last year to move the meetings to the first and third Tuesday of each month. Since the Board of Trustees meets on the second and fourth Tuesdays, it was thought to be more consistent if the Planning Commission meetings were on the opposite Tuesdays, with a second monthly meeting also added to the Planning Commission schedule. Attending Tuesday’s meeting were Commissioners Penny Prinster, Charlotte Wheeler, Betsy McLaughlin, Riley Parker, Stan Harbaugh, and Chair Don Bosch. Ron Gearhart was absent. Also attending were Town Administrator Janet Hawkinson, Planner Allyson Shellhorn and Water Treatment Plant Manager Matt Lemon.

Two public hearings were scheduled, one for a change of zoning at 105 Main St., and the other for vacation of a portion of a town-held sewer easement in Cresthaven Acres subdivision. 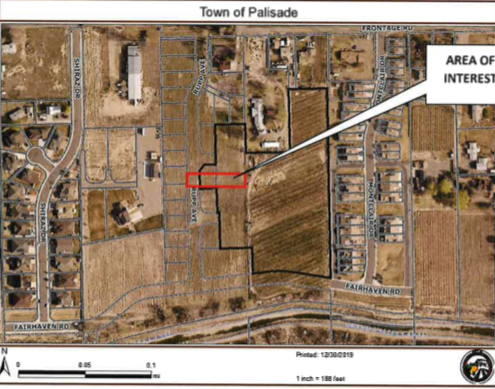 Portion of old sewer line that is requested to be vacated.

Vacation of the sewer easement was explained by Lisa Cox of Vortex Engineering, spokeswoman for the applicant. She described a 15’ section of an old 8” sewer line running through the property now being developed as Cresthaven Acres on the east side of Palisade High School. The portion of the line to be vacated runs between Lot #25 and Lot #100. Since new sewer lines have been installed for the new subdivision, it is desirable for the Town of Palisade to request that the old line, no longer being used, be vacated. Cox explained that since the easement is publicly held, it must also go through a public hearing to be vacated. Once approved, the vacated portion of the old sewer line will be dug up and removed by the developer, sparing the Town any further responsibility or liability for the portion. There will be another request during construction of Filing 2 for vacation of another section of this same old sewer line.

As there was no objection from either the public or the Planning Commissioners, vacation of the easement was approved unanimously and will be recommended to the Board of Trustees for final approval. 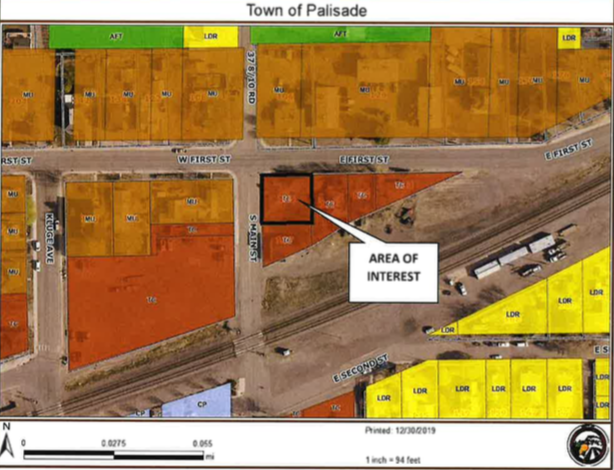 Site of proposed residential duplex if zoning change is approved. See below.

The second public hearing was regarding an application to rezone the property at 105 Main St. from Town Center (TC) to Mixed Use (MU). Owners of the property wish to build a residence, and if the zoning change is approved, they will also apply for a variance to put a duplex on the property.

Presentation was made by Karina and Nate Parenteau of Big Dog Builders for a proposed duplex with entry from Main Street, approximately 1,600 sq. ft. per residence, with a single car garage and driveway for each unit. The residence(s) will be built above a crawl-space and are currently designed as two story units.

Resident of 102 Davis Circle – likes the site plan but concerned about the narrowing of First Street at the east end, affecting parking and traffic congestion. She wanted to make sure that the entrances would be from Main and not First Street.

Sandy North – 392 Fifth Street – likes other work done by this contractor but is concerned about giving up Town Center space when we are trying to revitalize the downtown area.

It was also pointed out that this property is outside the marijuana-free zone downtown. After a short discussion, the zoning change was approved unanimously.

Town Administrator Hawkinson announced that the Town had been awarded a $37,000 amendment to a grant by the Department of Local Affairs (DOLA) to use for the purchase of a wood chipper to help with ongoing maintenance and disposal of tree debris. The chipper was the second piece of new equipment; the original grant award was for the purchase of a leaf sweeper last fall.

The town has also applied for a grant through CDOT for $750,000 for improvements to Highway 6. Since Palisade falls into the ‘poverty’ category for the purpose of awarding grants, we can also apply to have our matching percentage, usually 50%, reduced, hopefully to 25% of the grant total, which would give us about $900,000 to spend. We should be notified in the next couple of weeks of the outcome of that grant application. The matching funds will come from developers’ traffic impact fees.

Matt Lemon, our Water Plant Manager, reviewed the recent projects that the town maintenance staff has been working on. They have replaced two major valves in our water line coming from the water plant in Rapid Creek, upgrading our system. A number of asphalt patches were applied around town where there had been water line and other maintenance breaks.

The intersection at Third and Kluge is still waiting on a redesign of the new ‘bulb-outs’ that will be added to the corners to align the stop signs correctly for visibility at the new four-way stop. The Requests for Proposals (RFPs) are ready to go out to contractors for construction of the bulb-outs as soon as a time-line is approved to fit with other scheduled maintenance projects.

Planning Commission members met Tuesday, January 21 for a work session. Discussion began with a clarification of Hospitality/Retail (HR) zoning. Although it is defined in the Land Development Code as being property along the I-70 corridor, other property in Palisade NOT along I-70 has also been zoned as HR. Some members felt that in addition to the I-70 corridor, the HR zoning should also be applicable along Highway 6 and Elberta Avenue. Town Administrator Hawkinson and Planner Allyson Shellhorn will draft a text amendment to the code to include the desired changes to present at a future meeting.

Off-street parking was discussed as well. It was decided that stacked parking in driveways would not be allowed as a way to satisfy off-street parking requirements; that is, a car would be allowed in a garage but only one car is allowed on the driveway in front of the garage. If residents choose to use stack parking, it is allowed, just not as part of the calculation for how many parking spaces a project will need.

Commissioners also approved unanimously to return site plan approval and variance requests back to the Planning Commission. Currently the Board of Trustees hears variance requests and the Planning Director has had authority to approve site plans of less than four units.  Hawkinson explained that the Board is not as familiar with the LDC as the commissioners when it comes to approving variances, and returning site plan approval restores checks and balances to the planning process.

Also discussed were use of Roberts Rules of Order when conducting public meetings, and the wording of the proposed ordinance change to cover compensation for planning commission members, and terms and limits of service.

The next meeting of the Planning Commission will be on February 4, 2020, in the meeting room of the Civic Center at 341 W. Seventh Street at 6:00 p.m. The public is encouraged to attend and information packets can be obtained from the town website at www.townofpalisade.org or at Town Hall.