The Palisade Planning Commission at its Feb. 2 meeting held its second discussion of possible revisions in standards for manufactured homes and parks in the commission’s on-going update of the Palisade Land Development Code.

The commission agreed to continue the discussion, likely at the March 2 meeting.

The focus of possible upgrades of standards is older homes, those built prior to the 1976 HUD (U.S. Department of Housing and Urban Development) code.  Town records show that 61 percent of the 183 mobile homes in Palisade meet the HUD code standards, while 39 percent are pre-HUD units.

Therefore, based on current standards, units built prior to the 1976 HUD codes are substandard, Ron Quarles, Palisade community development director, told the commission.

Concern about older housing involves health and safety, such as wiring and close spacing of units.  Concern was also raised about the lack of landscaping and screening of the Papark Spaces park on 8th Street across from the fire station.

At the meeting, Quarles outlined options for revising existing manufactured housing standards in parks with nonconforming uses.  Options include no increase permitted in the number of homes, and replacements must be HUD code homes.  “The question is how should we treat nonconforming uses,” he observed.

He also listed questions about possibly requiring upgrades for existing manufactured housing.  Upgrades, for instance, might include street lighting, garbage containers, internal roadways and walks, and phasing out of pre-HUD code units.

Quarles noted that a possible standard of replacement of units no closer than 15 or 10 feet from any other manufactured home would not impact existing parks, except for the Papark Spaces park on 8th Street.  Units there would not be able to be replaced.  “So, that’s the question for the community,” he told the commission.

Quarles also presented statistics about the town’s existing manufactured housing, comparing the density and age of units in the town’s four mobile home parks, the percentage of single and double-wide units, and presented standards in 11 other cities in Colorado, including New Castle, Salida, and Rifle.

Commissioner Roger Rawlings commented that there is a lot of material to review.  “I couldn’t discuss it tonight,” adding, “I’ve got to go and take a look at the mobile home parks.

“I suggest we hear from the owners of the properties and take a look at the parks, so we can start to talk more intelligently,” he offered.

In his presentation, Development Director Quarles noted that there are 183 manufactured homes in Palisade.  The units are located in the Palisade Mobile Home Park, Longs Park, Papark Spaces, and Rio Vista which has two locations, Brentwood and Granada Drive.

Quarles reported that the average age of units in the Palisade Mobile Home Park is 36 years, Longs Park 38 years, Papark Spaces 43 years, Rio Vista Brentwood 21 years, and Rio Vista Granada 29 years.  The average age of housing in the town of Palisade is 34 years, he added.

Quarles told the commission that he was somewhat surprised that mobile homes comprise 19 percent of housing in Palisade.  The oldest unit was built in 1958, he noted.

“It’s a health and safety issue, especially the really older homes, from the 50s and 60s,” Quarles said.  “If we amortize, that’s going to impact a lot of people.”

Quarles said a question is, “Should we require upgrades?”  The city of Rifle has required upgrades, and has allowed 13 years to complete them, he noted.

Quarles said, “Our main focus is the pre-HUD housing,” commenting, “Some might be unsafe,” citing electrical wiring.

McLaughlin asked about who would inspect them and pay for it.  Quarles said, “Pre-HUD would never meet the HUD code standard.  They should be replaced with HUD code homes.”

Commissioner Ron Gearhart noted that 40 percent of the manufactured homes in Palisade are pre-HUD.  Quarles said, “It impacts quite a few homes.”  Gearhart asked how many people it would affect.  Quarles estimated between 70 and 140.

Quarles said if new requirements are adopted that require upgrading of the pre-HUD homes, they should be amortized over a period of time, an agency should provide assistance to home owners, and waivers should be available to them.

Commissioner Lafe Wood asked if it is legal for owners to sell pre-HUD units.  Quarles said it is, but that the units would not be permitted to be moved to a location within Palisade or within Mesa County.

Trustee Sundermeier commented that the landscaping around the mobile home park on 32 Road is nice.  Quarles noted that any new park proposed in Palisade would be required to install landscaping.  Sundermeier suggested, “Maybe we could upgrade the older parks.”

Quarles said that he and Town Administrator Rich Sales will meet soon with the Rifle town manager to ask how successful the upgrade in standards has been.  The standards were adopted in 2000 with a 2013 deadline to meet HUD code standards.  “We’ll let you know how the meeting went.”

Commissioner Rawlings suggested that the staff prepare further information and suggestions, “Because this affects Palisade in a big way.”

Trustee Sundermeier noted that some land owners will be okay with possible new standards, while some will not, but that the discussion of revised standards should “move forward in a positive way.”  “Fairly,” as well, Quarles added.

Sundermeier observed, “Whatever the planning commission decides, it’s going to be important for the future of Palisade.”

Quarles said, “We’re pretty close to what others (communities) are doing,” in comparison to the 11 other communities surveyed.  “We probably don’t want to change it (the Land Development Code manufactured home standards) much for new developments.”

Quarles asked if the status quo is an option.  However, Commissioner Charlotte Wheeler said, “I think the entrance to Palisade … is important,” in reference to the lack of landscaping on 8th Street in front of the Papark Spaces park.  Quarles said health and safety is another aspect.  Commissioner Gearhart recalled that several years ago a unit in Clark’s Trailer Park (known now as Papark Spaces) blew up in the early hours, waking him.

(See map below.)  There are 183 manufactured homes in four parks in Palisade.  The parks are the Palisade Mobile Home Park, Longs Park, Papark Spaces, and Rio Vista.  Town of Palisade map. 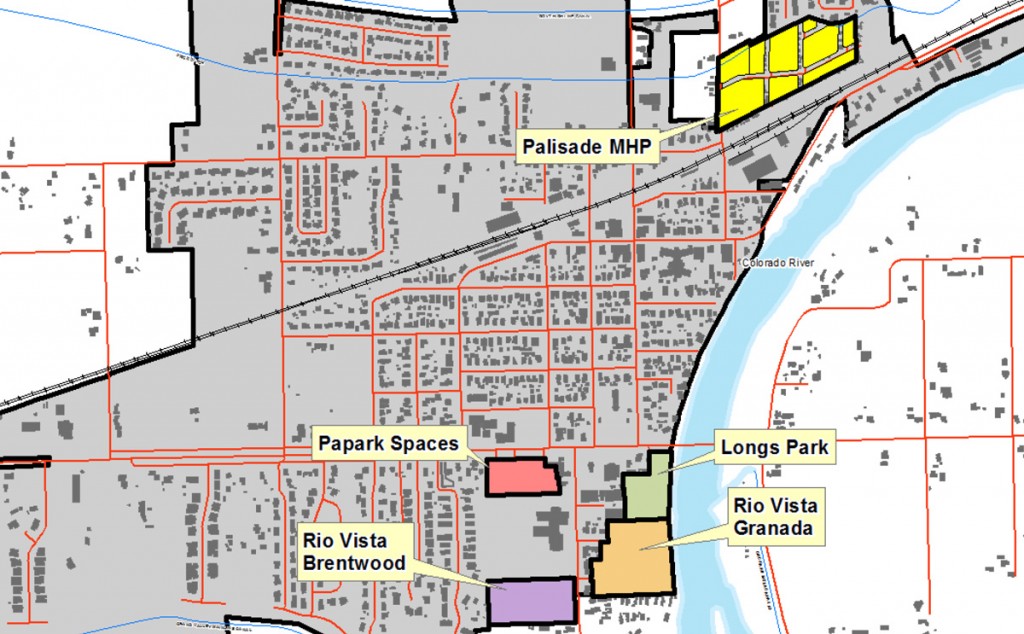 Quarles said that at the commission’s meeting in March a Palisade property owner will present a request to revise the Land Development Code concerning day care centers to match the state standards.  The Palisade code permits up to five children, while the state permits up to six children.

The one-hour meeting was held at the Palisade Civic Center.  Commission meetings are normally held on the first Monday of the month, at 6 p.m.  Meetings are open to the public.  The next meeting is scheduled for March 2.  Agendas are posted on the town website.