Both the Palisade Planning Commission and the Palisade Board of Trustees recently approved a resolution and an ordinance that were needed to rezone property at the request of the property owners, Robert and Leslie Shaw, 3715 G Road. An additional variance on a property line was also granted. After hearings in front of the planning commission on Monday, May 4, recommendations were made to the trustees to approve all three requests at their regularly scheduled meeting on Tuesday, May 12.

At their regular monthly meeting on May 4, the Planning Commission held three public hearings on the Shaw property request. The meeting, held in the Civic Center meeting room, was also the first for new Planning Commissioner Rick Gibson, filling the vacancy left by the resignation of Roger Rawlings in March.

Considered first was a request for a preliminary plat for the property located at 3715 and 3715 ½ G Road. There are currently two separate homes on the property, and the owner is asking for the property to be split into two legal lots for the residences, and a third lot to include the existing peach orchard. The third lot has a dogleg down the east side of Lot 2 to give access from the orchard to the frontage road, as well as access in the event of future development of the orchard.

According to Community Development Director Ron Quarles, the properties meet all required specifications of Palisade’s Land Development Code for sub-dividing. Mr. Shaw was asked for a comment, and explained that the purpose of separating the lots was for future planning and possible land transfers, to be able to sell one property separate from the others, if desired. He currently has no plans to develop the orchard land, but plans to continue to grow peaches at this time. Lot 3, the current peach orchard, does include an easement along the southern end for possible joining to Rodeo Drive, should the orchard ever be developed into housing.

Staff recommendation was for approval, and after a short discussion, planning commission members recommended approval of the plat unanimously.

Next, the Shaws requested an ordinance rezoning Lots 1 and 2 from AFT (Agriculture, Forestry, Transitional) to MDR (Medium Density Residential). As Quarles pointed out in his report, the area is now identified as Low Density Residential in the Comprehensive Plan. However, the land to the east and the west have already been developed as Medium and High Density Residential. If Lot 3 were ever to be developed, it would most likely be zoned as Medium Density, same as vacant land to the west of the property, and ideally, adjoining subdivisions would be coordinated with regard to design standards.

There were specific questions from neighbors, residents of the Montclair subdivision, who wanted to make sure that this plat and rezoning was not an approval of a housing development on Lot 3, currently the peach orchard. They were assured by Quarles that the orchard would remain zoned AFT until such time as someone wanted to pursue development and then a zoning change would be required, including public hearings. The only property to be affected by the current rezoning request are Lots 1 and 2, the housing lots. Commissioners voted unanimously to recommend approval.

The final public hearing was on a variance request by the Shaws for a side yard setback modification. The current requirement is for 10’ between a building and the side lot line, and the home currently built on Lot 2 sits too close to the proposed lot line between Lots 2 and 3. Lot 3 includes a dogleg, enabling access from the frontage road, and for entrance to a possible future subdivision. The requirements necessary for width of an entrance road bring the necessary proposed lot line of Lot 3 to within 5 feet of the building on Lot 2, hence the variance request.

Mr. Shaw pointed out that the variance is only necessary for a distance of approximately 10 feet along the side of a garage, and the area in question is not living space in the house, or usable outdoor living space.

Upon presentation to trustees on May 12 by Community Development Director Ron Quarles of the Planning Commission recommendations, as well as explanation of the discussions and deliberations, trustees moved to approve the resolution, ordinance and variance as presented.

One more variance request was heard by the Trustees at the Tuesday May 12 meeting, from Lafe Wood, 223. E. 2nd Street, for a side lot line variation as well. Mr. Wood spoke to trustees, explaining his situation and reason for the request. Per Quarles, neighbors had been notified of the variance request and no opinions had been registered. He also pointed out that even without the variance, Wood’s home was still further than the minimum distance away from the home next door. Trustees approved the variance. 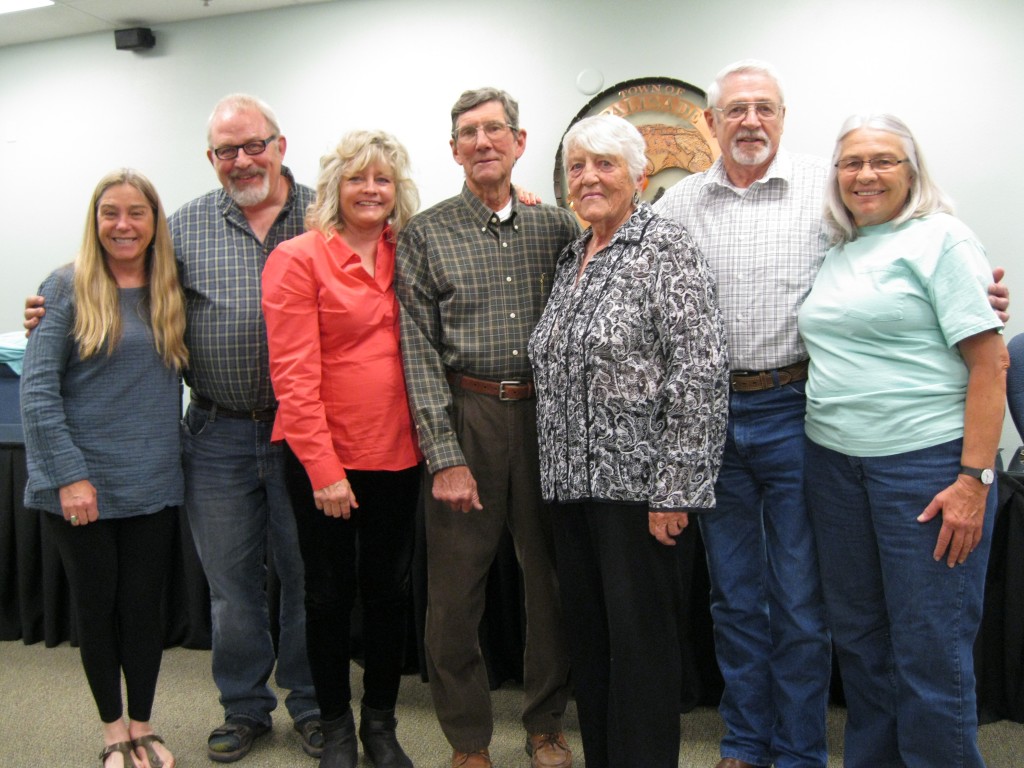 A declaration proclaiming the week of May 17 – 23 as EMS Week was read by Trustee Penny Prinster to Fire and EMS Chief Richard Rupp and other attending EMS volunteers. There will be a county-wide awards banquet at Colorado Mesa University on May 20 to recognize outstanding service by emergency medical technicians. Thanks to all of our county’s first responders!

Public Works Director Frank Watt reported that the constant rain and bad weather had put the Main Street project a bit behind schedule. He also reported that the poles were up for the shade structure in Town Plaza, and matching concrete work should be completed this week sometime.

The future downtown Main Street restroom building remodeling is having interior ‘messy’ work done before fixtures are installed, but it should be open for use soon. The railing next to the handicap entrance ramp will prevent use of the sliding ‘barn door’ type of closure to the building that was originally planned, so a little redesign work will be done to provide an entrance that is still easy to close and lock each evening. 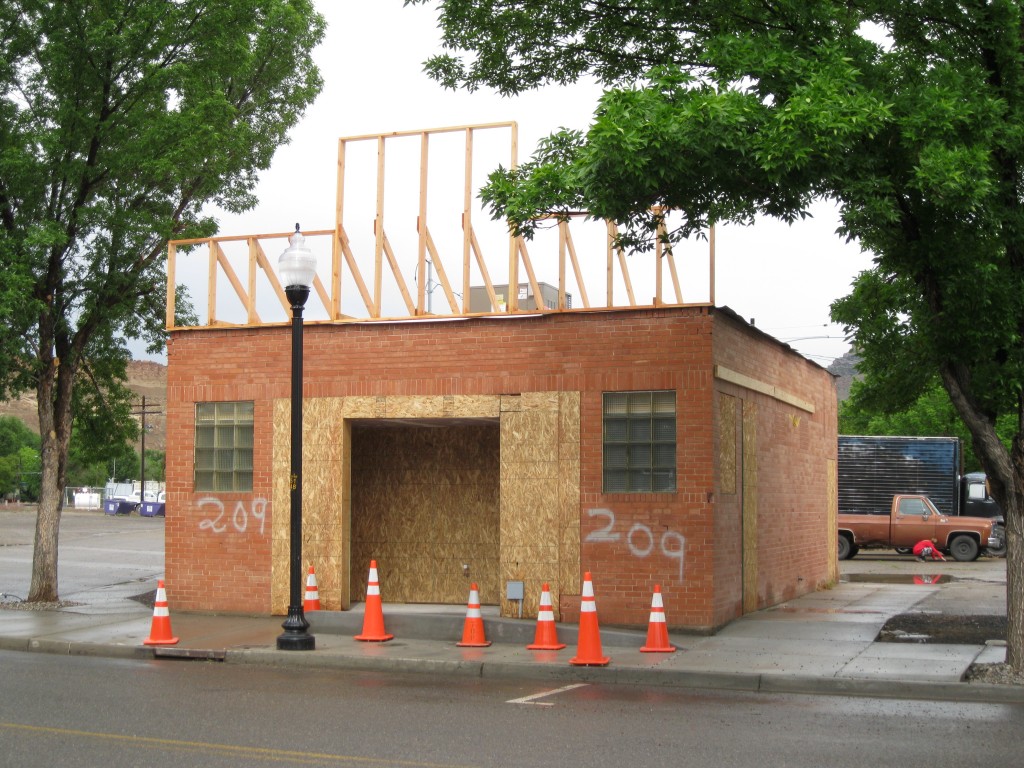 Steady progress is being made on the remodeled Main Street public restroom building despite the rainy weather. Town crews are now framing the false front, the design common to old west livery barns.

Chief Rupp hopes to have an address change ordinance before the board by the next meeting. He has been working on a county-wide project to clean up some of the confusing addresses that currently exist.

Interim police chief Deb Funston reported that the department was trying very hard to connect with the community, saying, “National events affect small town police departments, too.” Mayor pro-tem David Edwards also reported that he had received very positive feedback from representatives of the irrigation companies on officers’ courtesy while checking on trespassers on canal roads.

Community Development Director Quarles presented a progress report on the property at 392 W. 3rd Street that burned in 2014. A demolition permit has been applied for from the state; the intent is to demolish the wood structure and leave the brick structure as is.

Mayor Granat mentioned that the redesigned Palisade tourism website has a new URL web address, “visitpalisade.com”, and that it will pick up any traffic that still uses the old URL address. It is hoped that the redesign will allow for easier tracking of website traffic and more ability to target our marketing efforts.

All trustees and department heads were present for the May 12 meeting. The next meeting of the Palisade Board of Trustees will be Tuesday, May 26, at 6 p.m. in the Civic Center meeting room.   Meetings are open to the public.