A community survey regarding recreational opportunities and desires was finalized by members of Palisade’s Parks and Recreation Board (PRAB) at Thursday evening’s meeting in the community meeting room at 341 West 7th Street.

After action by the Board of Trustees on Tuesday, April 24, the number of PRAB members was officially set at nine, not including the Board member that sits in as an ex-officio member. They also approved of applicant Bill Alderman as the final member, and he was present at Thursday’s meeting as well. Alderman had been active on committees in Fruita that were responsible for getting their popular Recreation Center off the ground and supported by their citizens with a tax allocation. 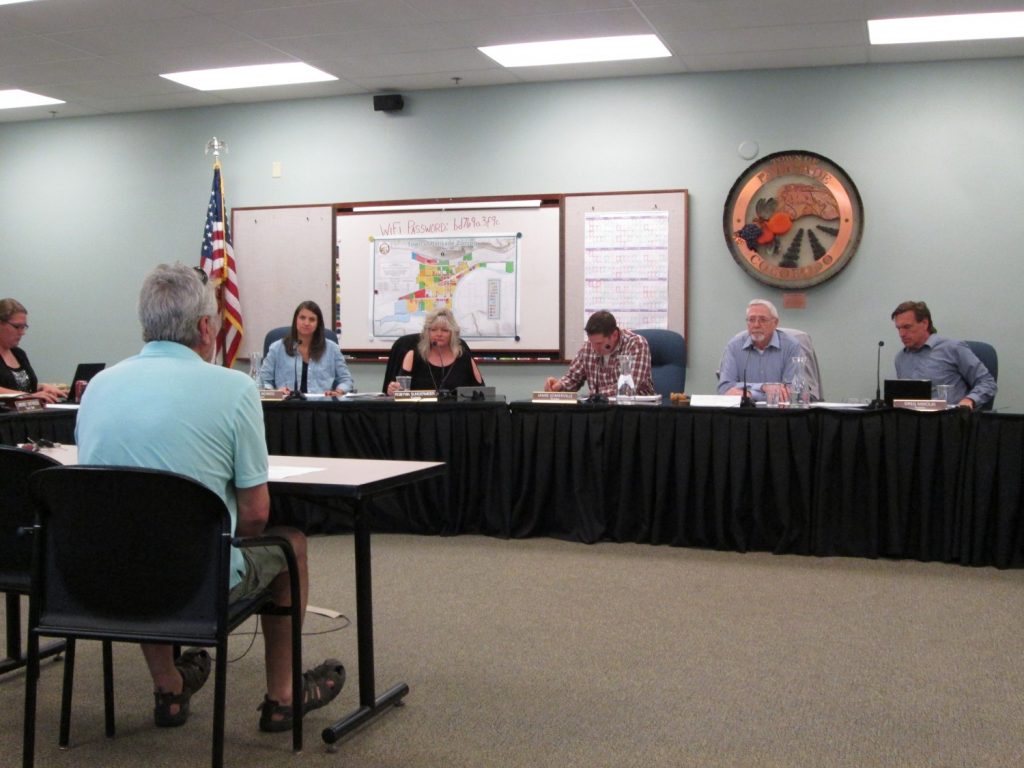 Bill Alderman was approved by the newly seated Board of Trustees for a position on the Parks and Recreation Advisory Board last Tuesday. Photo by Bill Hoffmann.

Alderman introduced himself to PRAB members as an avid disc-golfer, but said his main interests at the present time are the completion of the Palisade Plunge and the Riverfront Trail. Although not a Palisade resident, Bill has long had an interest in the town and it’s issues and had a desire to serve on PRAB.

Following introductions all around, Board members discussed the final draft of the recreation interest survey that they have written over the past couple of months, making a couple of final tweaks before sending it to Town Clerk Lindsey Chitwood for final printing and approval by Trustees before posting on Survey Monkey. They anticipate approval by Trustees at the May 8 meeting, with the survey to be posted for about a month afterward. Exact dates and instructions will be publicized as soon as the survey is approved.

There was also a short discussion on whether or not the PRAB board should apply for status as a 501-C, making them eligible for other types of funding than what is currently available. Desa Loughman moved to begin the process and Rebecca Waters seconded, expressing her belief that it would be a beneficial designation for the Board.

PRAB members also voted to retain Janet Prager as Chair and to elect Laura Lancaster as the Vice Chair to take over from Desa Loughman.

The next meeting of the PRAB members will be spent helping out at the fundraiser for the Palisade Plunge scheduled for Thursday, May 24 from 5 – 8 p.m. in downtown Palisade. Everyone is invited to attend and, of course, to contribute.