It was an evening of discussion for the Palisade Planning Commission on Monday, June 6. Agenda items covered included short-term vacation rental ordinance changes, signage issues regarding directionals to Riverbend Park, and finally, a lively discussion about downtown signage. A number of local business owners took advantage of the opportunity to give input; all downtown business owners had been invited by a letter from the Town to attend the meeting.

Quarles had put together a list of problem areas with the language of the current ordinance, and Sands provided input on how to best resolve them legally. Many of the new provisions suggested would be applied to ALL short-term vacation rental properties, currently operating or not, and some would only apply to new applicants.

Missing from the original ordinance are provisions on dealing with neighborhood complaints. Suggestions such as designated ‘Quiet Hours,’ as well as a limit on the number of ‘Daytime Visitors’ allowed at a property were made.

Identification of a local management company or owner’s representative was also suggested, along with a management plan being required as a part of the original application. Other suggestions regarding clerical issues like permitting deadlines, and license revocations/expirations were made as well.

After informal discussion and suggestions by audience and planning commission members, it was decided that Quarles would revise the current ordinance wording with the commission’s suggested changes and email it to commissioners for review before a public hearing to be held at the July 11 meeting. Final approval of the amended ordinance would be required by the Board of Trustees, likely at the July 12 or 26 meeting. 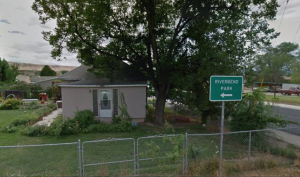 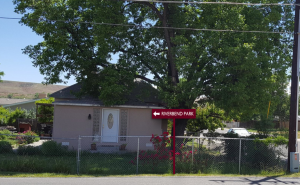 Quarles reported that since the erection of Palisade’s new wayfinding signage, the Colorado Department of Transportation (CDOT) has removed two green informational (above left) signs along the south frontage road pointing the way to Riverbend Park. Trying to keep areas from being cluttered with too much signage, CDOT removed their redundant signs once the new Town signs were installed, since they also directed to the Park.

Unfortunately, the new signs were located in such a way that it made it more difficult for a newcomer to find Riverbend Park.

Quarles suggested adding a couple more new signs (above right) matching the rest of the new Palisade signage that would direct specifically to Riverbend Park and be placed at the approximate locations of the signs removed by CDOT. Planning commissioners agreed by consensus with Quarles’ suggestion and asked him to order the two new signs since there is still money left in the budget for signage. 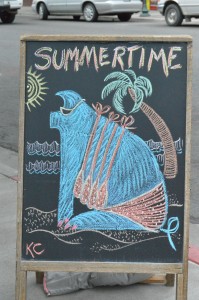 Downtown signage was the topic that drew the most participants, with at least a half dozen downtown merchants offering input on how to address the problem of current A-frame signage that is either unattractive or blocking passage on the sidewalks. Merchants seemed to agree that some other solution would be preferable, but also feel that the A-frame style signs are very useful in promoting specials.

A “M.A.S.H.” type sign, a post with many different arrow shaped signs pointing to all the town’s businesses and attractions, received the most enthusiastic response from the merchants. However, even with the directional assistance of the vertical signpost, the merchants still wanted to have use of the A-frame signs for promotional use.

Funding for the signage was also discussed, with Quarles offering the possibility of the Town sharing the cost of a pilot program, hoping to encourage use of the new signs instead of A-frames.

Choosing a standardized A-frame sign for all businesses was also discussed. This would resolve the problem of signs being used that are larger than what is allowed by the current Land Development Code, creating sidewalk hazards and problems for those with walkers, wheelchairs or strollers. They could be painted or decorated individually, using black(chalk)board or whiteboard, and still serve the purpose of advertising merchants’ special meals and deals.

It was decided to form a sub-committee of interested members of the planning commission and town merchants to discuss the subject in more detail. Commissioners Charlotte Wheeler and Betsy McLaughlin volunteered to get the process going, starting by contacting all downtown business owners to hear their concerns and suggestions.

The next regularly scheduled meeting of the Planning Commission is Monday, July 4, 2016. With that date being a legal holiday, the meeting has been rescheduled for the next Monday evening, July 11, 2016, in the public meeting room of the Civic Center at 341 W. 7th Street. All meetings are open to the public; an agenda is posted on the www.TownofPalisade.org website as well as at Town Hall at least 24 hours before any public meeting.