Heavy equipment is busy leveling and filling out Main Street, utilities have been buried, and paving should be under way soon. As nice as it will be to have Main Street reconstructed, it would also be nice to repeat the process on a number of needy Palisade streets.

Trustees heard from Milleman Street resident Teresa Jackson on Tuesday evening, April 28, at a regularly scheduled meeting of the Board of Trustees, and it wasn’t the first time she had addressed the board. This time, however, she heard a bit more of what she really wanted to hear. Jackson has occasionally addressed the board concerning the condition of Milleman Street, and the continuing problems with flooding and drainage.

It has been explained by the town that the repairs needed to Milleman are extremely expensive, and, short of an unexpected windfall, it is a process involving application for grant funds. And even if funds were to be approved by a state or federal agency, they often require that the town put up the same amount in matching funds, probably not immediately possible.

Trustees had discussed the street repair issue at their board retreat held the previous Tuesday, April 21. (Ed. note – the board retreat is an extra work session held each time there is a new board member, in this case, Thea Chase, to give them some background on town issues, policies and procedures. It is always open to the public.) They had decided at the retreat to create a street repair committee of 6 or 7 people, including town residents, business owners and town hall staff. The committee will be charged with evaluating the condition of the town’s streets, and to suggest solutions and possible timelines. Of course, any major street repair project would need to be approved and budgeted for before it could begin, but at least there will begin to be a process for dealing with what will be an upcoming and ongoing issue, repair of Palisade streets and sidewalks.

As Mayor Roger Granat explained the board’s decision, he also invited Jackson to be one of the citizens on the committee. He explained that they wanted to keep the committee small, easier to keep on task. Granat hoped they could “explore all the possibilities of what can be done to improve our streets.” 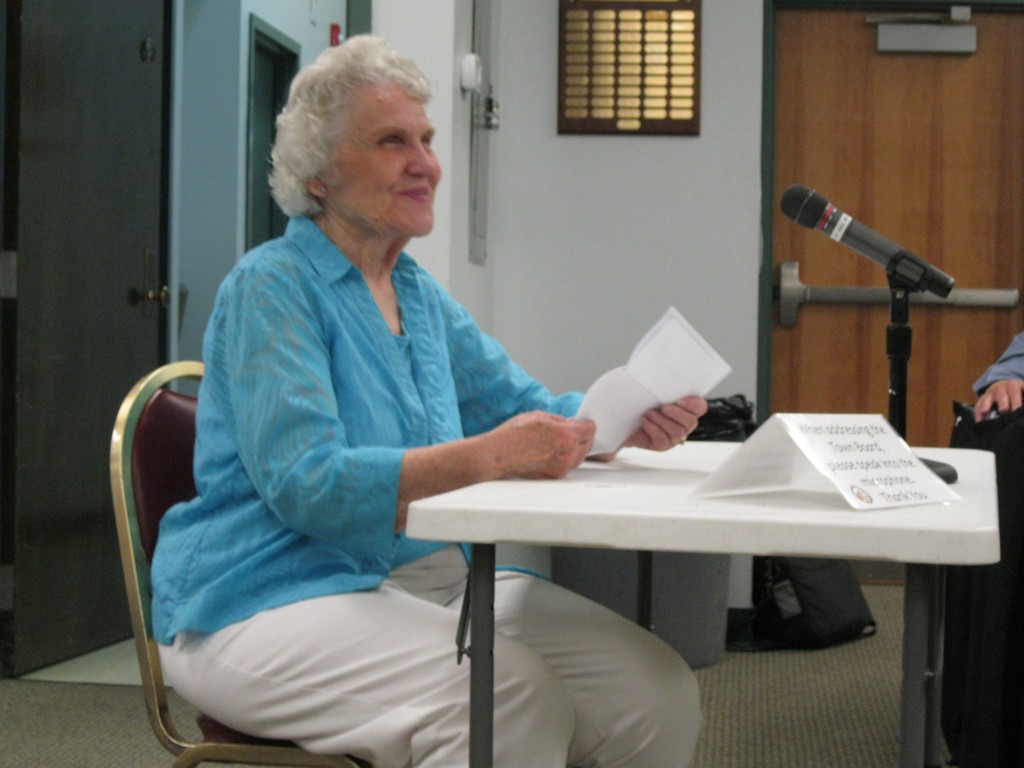 On a different topic, Palisade residents James and Glenna Barger asked for clarification on the town’s ordinance regarding the number of pets allowed per residence. The Municipal Code states that no more than 3 adult dogs and 3 adult cats may be allowed per residence, for a total of 6 animals. The Bargers wanted clarification that the total of 6 animals cannot be 6 dogs. Town Administrator Rich Sales explained that the ordinance really does mean only 3 dogs.  He agreed to look into a particular situation where rescue dogs have been taken in, but where the dogs now exceed the limit. At least one of these dogs is aggressive, and charges the fence at the Bargers. Sales also said he would look into whether the chain link fence had been constructed according to code.

May 10 – 16 was proclaimed to be Police Week in Palisade, in appreciation of the work of the entire police department. Trustees thanked Interim Police Chief Deb Funston as well as Officer Dan Dranginis, particularly, for their efforts in keeping the department running smoothly in the wake of recent disruptive incidents. Efforts of the Grand Junction and Fruita police departments were recognized, as well as the Colorado State Patrol and the Mesa County Sheriff’s Department.

Interim Chief Funston reported that the new evidence tracking system was getting ready to go ‘live’ very soon.  She outlined how the software will improve the department procedures. The department also been looking into obtaining body cameras, and Funston reported on acquiring radar equipment from the State Patrol. Funston also announced that there are a couple of openings on the reserve force, and that they hoped to have new officers hired and trained by festival season. 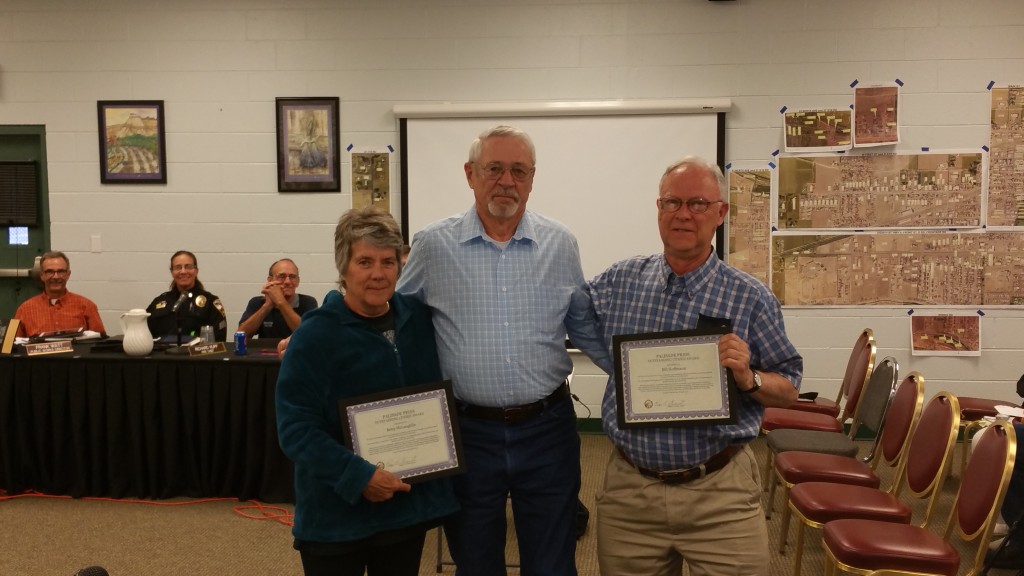 Mayor Roger Granat, center, presented ‘Palisade Pride’ Certificates of Appreciation to Betsy McLaughlin and Bill Hoffmann for their work to keep Palisade informed, previously on the Palisade Tribune, and most recently, on the PeachTownNews.com website.

Town Administrator Sales reported on a grant awarded by GOCO to Taylor Elementary School for the purpose of constructing a new outdoor classroom. Taylor was one of the few applicants that was awarded the full $114,000. The town is required to match $9,500, which was budgeted for and approved at a previous trustee meeting. Sales explained that this is a pass-through grant; that is, the town will receive the funds and have to pass them on to Taylor. Sales requested authorization to pass the money along, once it was received by the town. The motion passed unanimously.

Public Works Director Frank Watt gave a progress report on the new skate park planned for Palisade. He had originally planned to partner Palisade with the City of Grand Junction, who also is looking to build a new skate park in the near future. It was hoped that a partnership would help each town get a better deal on the projects. Watt reported receiving four responses to the requests for design proposals. Although disappointed that none of the four is from Colorado, they are still impressed with the proposals received and will be evaluating them in the next week. Watt hopes to move forward with design of the project in 2016 for possible construction in 2017, depending on funding. There is still the possibility for Palisade to partner with Grand Junction if suitable designs can be found at reasonable costs to each town.

Public Works Director Watt then moved on to a presentation of the BLM Resource Management Plan that has been finalized after many years of work. He briefly explained the complicated report, and the process for protest. The entire plan may be found online at www.blm.gov.

Trustee Robynn Sundermeier reported that the town Christmas Tree in the Town Plaza is dying. Public Works Director Watt agreed, saying that the tree is continuing to deteriorate and will need to be replaced. Sundermeier said that the Chelsea Nursery on G 4/10 Rd. has offered to donate a new tree. Watt will contact Chelsea Nursery to make arrangements to replace the tree.

The next meeting of the Palisade Board of Trustees will be held on Tuesday, May 12, at 6:00 p.m. at the Civic Center meeting room, 341 W. 7th Street in Palisade. All meetings are open to the public.