Public Works Director Frank Watt met with members of the Park and Rec Advisory Committee (PRAC) last Thursday, April 23, to give an update on the various projects now under way.

According to Watt, the Main Street reconstruction project is sticking close to the proposed timeline, with most of the in-ground work now completed.  New water and irrigation lines have been laid, as well as new utility lines that will be buried, getting rid of the old utility poles along Main Street. Crews have begun to rebuild the base of the new road this week, with paving to follow soon after. Construction of sidewalks will also begin soon.

Watt also reported that the public restroom facility under construction at 209 Main will be open for use as soon as the interior finishes are completed. The exterior will be completed once the facility is open. A concrete ramp has been added to the sidewalk in front of the building, making it ADA (Americans with Disabilities Act) compliant. The facility will be open during daylight hours, and will be locked at night to prevent misuse by nearby bar patrons. 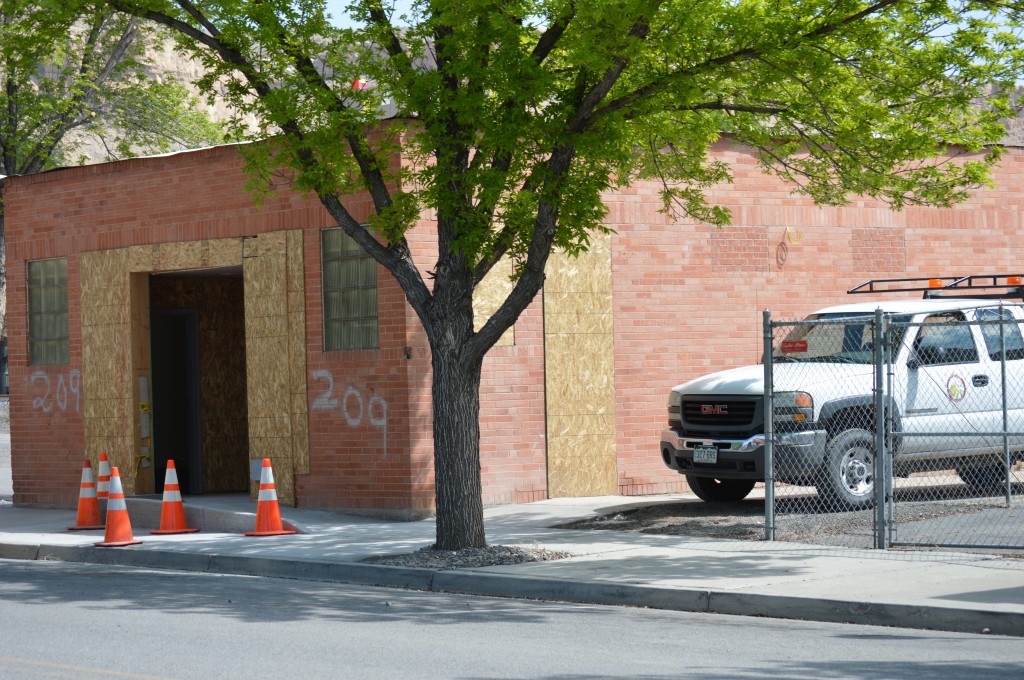 Work continues on the new public restrooms at 209 Main Street.

Unfortunately, installation of the shade structure in the Town Plaza across the street from the public restroom is slightly behind schedule. Crews ran into an issue that must be resolved before the concrete work can be completed, but they don’t expect to be held up long.

Recreation and Events Coordinator Sarah Brooks announced the hiring of a new intern, Carly Wagner, for the summer months. The intern will start at the end of May and will begin with a fishing camp for kids. An adult fly-fishing class is also planned, and equipment will be borrowed from Colorado Parks and Wildlife for student use. Previous intern Mary Brennan will be staying on to teach tennis through the summer, then will train the new intern how to teach racquet sports.

Brooks also updated the committee on summer plans for the swimming pool, opening for the summer on May 23. She will teach a diving class this year in addition to the swimming lessons offered by the pool staff. She also announced that Friday, June 5, will be the first date in the summer movie series. It will be a “Dive-In” movie, shown at the swimming pool, and movie-goers are welcome to watch while floating in the pool if they want. Lawn chairs are also welcome, for those not wanting to get wet. ‘Pirates of the Caribbean’ will be the opening film. Celebrating National Park Month in July, the July 15 movie is scheduled to be shown in Riverbend Park. Picnic dinners are suggested for the July date, and there will be other family activities available. The final movie, Wednesday, August 5, will be shown at Memorial Park.

The popular summer hiking series will continue, usually on Monday mornings, but occasionally a Wednesday evening sunset hike will be substituted.

Brooks also reported on the popularity of the Yoga and Wine series; more wineries want to be involved and it is just a matter of finding places that have an indoor space available also in case of bad weather.

Brooks also announced plans to distribute the results of each season’s programming to the members of PRAC soon after each season ends so timely, useful follow-up can be done.

Trustee Thea Chase, ex-oficio member of PRAC, inquired about the use of online registration for recreation programs. Brooks has looked into it, but says there would need to be about 90 online registrants per month to justify the cost of the software. At this time there is not that much demand, but the idea will be revisited as the rec programs grow.

There was also some discussion on ideas for hiking and biking connections from Palisade’s North River Road to the Island Acres campground, just a few miles east of Palisade on I-70. The town has been granted access to a sliver of property along the river between Palisade and Cameo, and a trail easement will be granted through the future shooting complex property with Halliburton already signed on to donate a trail. Watt suggested applying for a planning grant from Great Outdoors Colorado (GOCO). Palisade could request up to $25,000 but would need to match the funds, so it will need to be considered for the 2016 budget cycle. Joining the proposed new trail with Highway 65 to Mesa and Powderhorn is also an option. PRAC member Janet Prager pointed out that having multiple recreation areas tied to one another would be very important in attracting tourism. Members agreed to pursue information on a GOCO grant.

Public Works Director Watt also reported on progress toward a new skate park for Palisade. Planning to partner with the City of Grand Junction, the group put out requests for proposals, but, so far, the ones that have come in were more expensive than planned for. Watt will be interviewing the applicants on May 7. It has been ‘guesstimated’ that the project would cost about $250,000. The design phase is planned for 2016, with the build possibly taking place in 2017.

Watt was also asked about a ‘boat launch’ area at the east end of Riverbend Park near the bike skills park, now under construction. Although actual boats would not be launched, the area is requested for bathers to be able to safely wade in and out of the river for tubing, kayaking and paddleboarding. A ramp at the east end of the park would give a reasonable ‘loop’ to the water activities. The bike skills park should be completed by some time in September.

Presented with a spreadsheet itemizing PRAC’s wish-list, members realized that they needed more time to prioritize, and agreed to think it over till the next meeting.

PRAC member Winslow Robertson closed out the meeting with a short discussion of the effects of the recently announced BLM plan for the wilderness areas surrounding Mesa County. He said that although Horse Mountain will be open to some types of motorized traffic, the Palisade Rim Trail will be restricted to foot and non-motorized travel as expected.