It was almost like an early visit from Santa Claus as civic groups delivered gifts to the Palisade Board of Trustees at their only December meeting on Tuesday evening at the Civic Center. The second meeting this month has been cancelled due to the timing of the Christmas holiday. Town Hall offices will also be closed on Thursday and Friday, Dec. 25 and 26, and then again the following Thursday, Jan. 1, 2015.

Scott Holzschuh, Colorado National Bank, was joined by members of the Palisade Sunrise Rotary Club in presenting a check for $5,000 to the Town of Palisade from the club to be earmarked for use by the fire department to purchase, refurbish and update the department’s emergency self-contained breathing apparatus (SCBAs) for the firefighters.

The club’s donation actually required the application for a grant, so local resident and Rotarian Ron Higuera volunteered to become a certified grant writer. Not only did Palisade Sunrise Rotary contribute the proceeds of the grant request, but the Grand Junction Rotary Foundation then matched the Palisade club contribution, and the Rotary’s District 5470 matched that total to make $5,000.

Fire Chief Richard Rupp had a sample of the gear to show to trustees, and explained that the generous donation would allow the refurbishing of eight sets of gear previously donated to the department by Encana Oil, updating them with PASS units. The department would also be able to purchase three more complete, refurbished SCBAs. There should be enough units that each truck can be stocked with SCBAs, and each firefighter should be able to have his own personal mask. 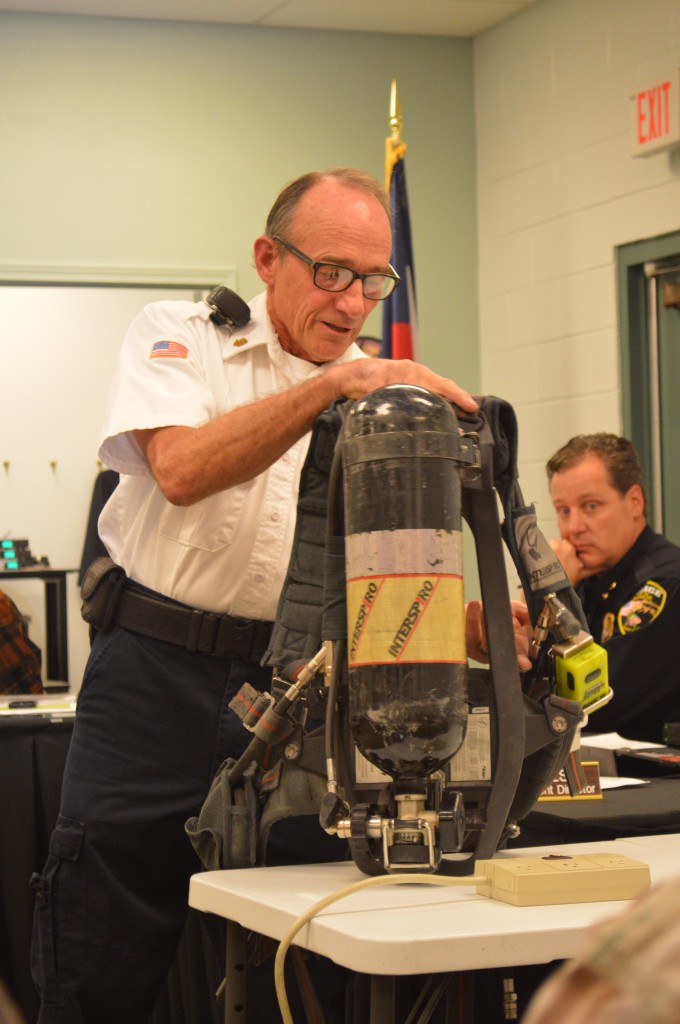 Cassidee Shull, Director of C.A.V.E. (Colorado Association for Viticulture and Enology) entertained trustees with an official wrap-up of the 2014 Colorado Mountain WineFest at Riverbend Park last September. With attendance of almost 6,000, this was the most successful year yet for the festival. Attendees came from 37 states and 4 other countries, and Grand Valley hotel rooms were sold out for the weekend.

Shull explained that C.A.V.E. is anxious to make each year better, although not necessarily bigger. Due to the high desirability and limited size of the Riverbend Park venue, as well as local lodging options, the organization will focus on adding events and quality experiences instead of specifically trying to attract more attendees. The festival’s new addition this year, “Wine, Dine and Paint,” was a sellout, and 200 tickets have already been sold for the 2015 festival.

C.A.V.E. also donated a framed poster from this year’s event to add to the collection beginning to fill the walls of the public meeting room at the Civic Center. 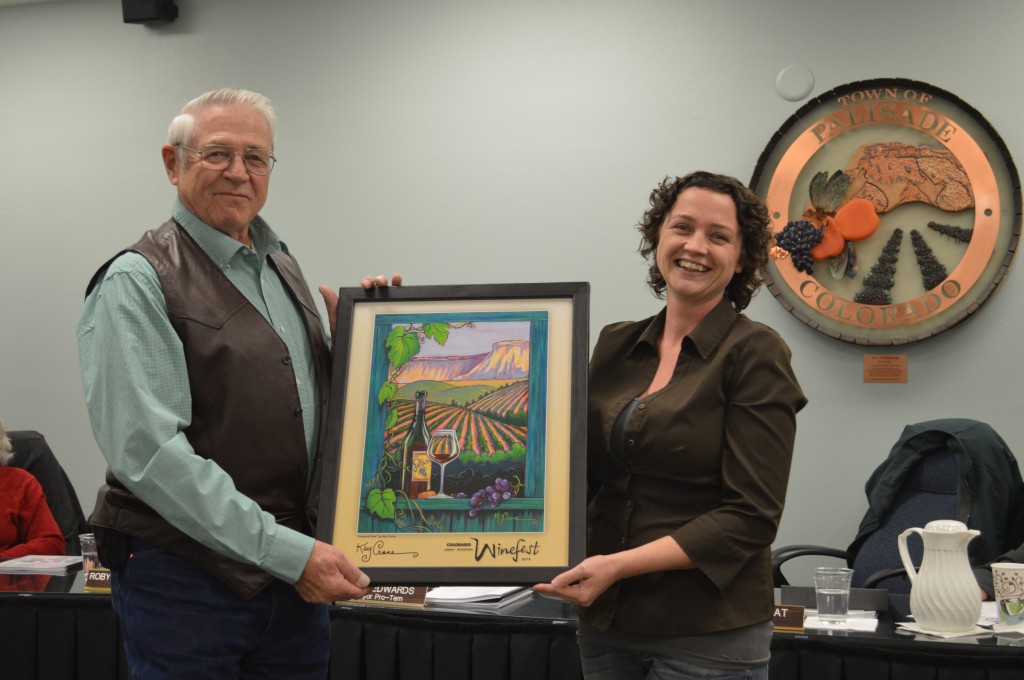 C.A.V.E. Director Cassidee Shull presents a framed poster from the 2014 event to Mayor Roger Granat at Tuesday’s meeting of the Board of Trustees.

Fire Chief Rupp introduced new EMS Director Joe White to fill the position previously held by Bill Binnian, who has gone on to work with CareFlight at St. Mary’s Hospital. Joe comes to Palisade after having spent the past 15 years with the Grand Junction Fire Department, and another nine before that with the Clifton Fire Department as well as earning numerous certifications and credentials along the way. EMTs from Palisade often move on to the Grand Junction EMS squad, so this was a welcome change in direction, according to Rupp. White’s career in Palisade actually began last weekend with a stint as a judge in the Olde Fashioned Christmas Chili Cook-Off. 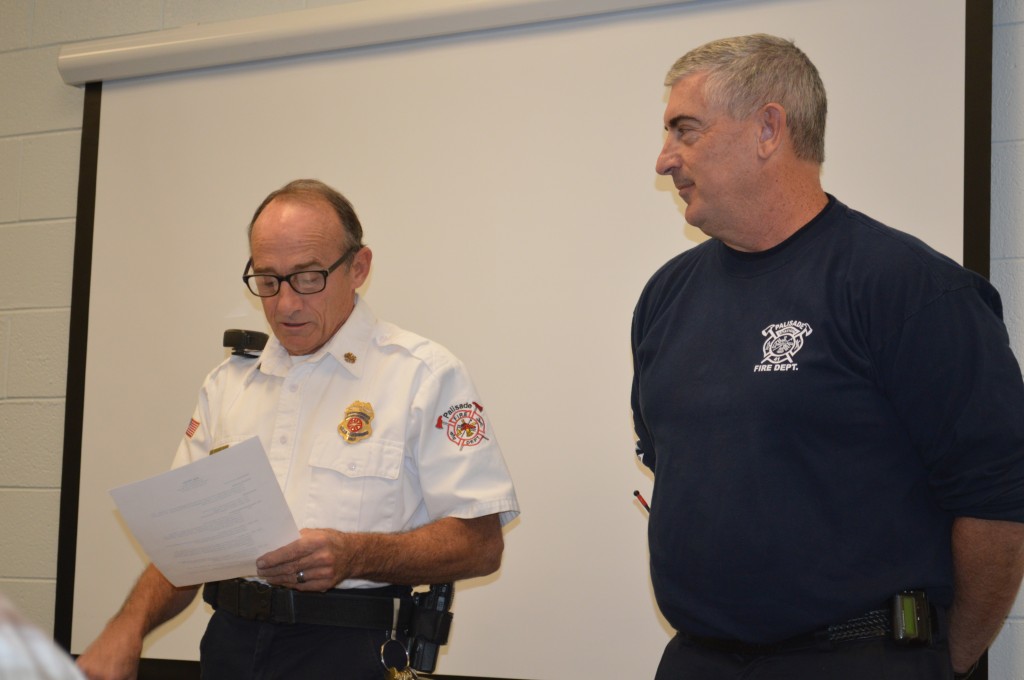 In response to a request for more information by trustees at their last meeting in November, Brad LaRock, manager of Grand Junction’s Townsquare Media, returned with a packet full of plans for a proposed motorcycle festival in Riverbend Park on Saturday, Aug. 29, 2015. The packet included details for parking and shuttles, as well as security and noise control. Promoted as a family friendly event, there will be activities and vendors for all ages, and NO COLORS will be allowed. The proposal plans limited parking at the west end of Riverbend Park, accessed by 36 ¼ Rd. All other parking would be in town, with shuttles, vendors, and volunteers being the only traffic allowed through the neighborhoods above the park. The event would be held in the west end of the park, with group rides scheduled for the Grand Mesa, Gateway and the Fruit & Wine Byway. Trustees agreed to allow the festival plans to proceed, and discounted the park rental fee to help get the first year’s event off the ground. Event organizers will be responsible for all security and policing costs as well as set-up and break-down of the venue.

Trustees also unanimously approved the 2015 budget for the Town of Palisade, requiring passage of four different ordinances. The first was to officially adopt the budget, the second to appropriate money to the various town funds included in the budget, and the third to levy the 2014 property taxes for the 2015 budget year. The final ordinance passed was to adjust the budgeted amounts of the Wastewater Fund and the Solid Waste Fund. This last adjustment ordinance is a normal part of the budget process, allowing for last minute changes since the board approval of the budget weeks ago. There was no public comment offered on any of the ordinances before passage.

In other town business, trustees approved the sale of a 5-acre, unusable piece of town property to the adjoining property owner, Mr. Don Stack. In a request to trustees at the April 22, 2014 meeting, Mr. Stack requested permission to purchase the canyon wall property to fill out his acreage. He complied with town requests to subdivide, then obtain permission from other adjacent landowners before the sale by trustees was approved.

Resolutions were unanimously approved to renew the town’s Memorandum of Understanding with the Palisade Chamber of Commerce for 2015, and to enter into an Intergovernmental Agreement with the Grand Valley Transit Authority concerning matching funding for public transit services for 2015 and 2016.

Trustees also discussed a grant application filed with GOCO (Great Outdoors Colorado) on behalf of Taylor Elementary School for a new outdoor playground and learning center. Trustee David Edwards requested that noise to the surrounding neighborhoods be taken into account when deciding on the site for the playground. Other installations of this type may be seen at http://www.learninglandscapes.org.

Longtime Palisade resident Roland (Ron) Gearhart was approved as the newest member of the Palisade Planning Commission, and new resident Stan Stephens of Long Point Digital Marketing was confirmed as a new member of the Tourism Advisory Board. Both will be seated immediately.

Police Chief Tony Erickson invited all interested residents to an award ceremony on Monday, Dec. 15 at 7 p.m. at the Community Center to commend Palisade Officers

Trustee Cody Butters thanked everyone in town that has helped the Park and Rec Advisory Committee (PRAC) in collection of donations for the annual Christmas basket project. PRAC will be able to help nine local families enjoy a merrier Christmas through the generosity of Palisade residents.

Public Works Director Frank Watt thanked everyone that helped decorate downtown Palisade for the holidays. He particularly wanted to thank Arden Blatter for her efforts, as well as employees of the Palisade Chamber of Commerce. The Ace Hardware – Coop was also thanked for their help hanging the decorations.

Mayor Granat is still waiting to hear from Colorado Parks and Wildlife on the request for funding for a sport shooting complex near Cameo. He is operating on the theory that “no news is good news,” and a decision should be announced this week. He closed Tuesday’s meeting by wishing all staff members and town residents a very Merry Christmas!