This week’s meeting of the Board of Trustees began with an hour-long work session at 5:00 p.m., giving an opportunity for discussion on two unrelated topics before the regular meeting began at 6:00 p.m.

Application for a Department of Local Affairs (DOLA) grant was agreed upon for the purpose of studying the feasibility of consolidating all the town offices in one location. The most likely site would be the old Palisade High School and current home of the Palisade Fire Department. Major work would need to be done on the old high school building, beginning with the removal of asbestos, before anything else could be done. The asbestos removal would need to happen even if the entire building was to be demolished, although that is not one of the options currently being considered. It would be more likely that at least part of the old building would be repurposed for use as Town Hall, although the discussion was only to agree that more options should be drawn up and considered. The DOLA grant would help cover the costs of exploring different solutions.

The second discussion was regarding the Palisade Art Vision’s (PAV) status with the Town of Palisade. PAV is not currently a committee or commission that is within the official structure of the town for purposes of funding, insurance or operations. Although PAV has been operating since the Main Street renewal project of 2017, there are no written by-laws, or published procedures for obtaining and caring for public art. Trustee Thea Chase has been involved with PAV since its inception and volunteered to talk with the group to get some idea of how they envision the structure of the group. Finance Director Travis Boyd was agreeable to letting the group suggest how they would like to be organized, assuming it can be worked into the Town’s official organizational chart. 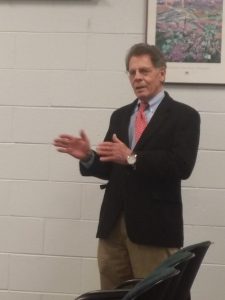 When the regularly scheduled meeting began at 6:00 p.m., Judge Dan Robinson was introduced to the Trustees and citizens as Palisade’s new municipal judge. He will take over the position previously held by retiring judge Marna Lake and was unanimously approved by the Board.

A resolution was passed that appointed the Town Administrator, currently Janet Hawkinson, but the resolution refers to whoever is serving in the position, as the Town Clerk and Town Treasurer. Town Attorney Jim Neu explained that although the move might have the appearance of a “power grab”, it is actually a necessary step to comply with what is currently required of a statutory town according to the Colorado Revised Statutes (31-4-304).

Scott High of High Country Orchards and Colterris Winery requested a vacation of a pubic right-of-way located just east of the property located at 244 W. Third Street and west of the property located at 238 W. Third Street. The purpose of the vacation request is to facilitate the remodel and expansion of the iconic building located at 240 W. Third Street into a world-class museum of wine and winemaking, as well as a tasting room for Colterris Winery products. The right-of-way to be vacated will allow for landscaping and construction of a wine-garden style outdoor patio to the east of the current building. The museum will be housed in a new addition to the west of the current structure. Trustees vacated the right-of-way unanimously, and all voiced enthusiasm for the new project.

Chamber of Commerce Executive Director Andrew Weber addressed the Trustees for a second time regarding the proposed Classic Car Show scheduled for the Saturday before Father’s Day, June 20. He had been asked by Trustees at their previous meeting to bring back more information before getting final approval for the event. Weber has contracted with Western Slope Traffic Control to take care of all issues regarding the closing of the downtown intersection at Main and Third Streets as well as getting the intersection open again at the close of the event. He had also asked each of the business owners on the affected blocks sign off on their support for the show. Approximately 75 cars are expected to be on display along Third and Main Streets around the Town Plaza.

The coronavirus was addressed by Palisade Police Chief Funston. She described steps taken by our first responders when answering 911 calls, as well as posting information on the town website.

The next meeting of the Board of Trustees will be held at 6:00 p.m. on Tuesday, March 24 in the meeting room of the Civic Center at 341 W. Seventh Street. Meetings are open to the public and all citizens are encouraged to attend.