Mesa County’s 2016 Budget was summarized on Tuesday evening, Nov. 10, by County Commissioner Rose Pugliese at the regularly scheduled bi-monthly meeting of Palisade’s Board of Trustees. Addressing the trustees in the meeting room of the Civic Center, 341 W. 7th Street, Ms. Pugliese explained that although the county budget is currently in deficit, the commissioners are also eager to help with any economic development ideas that the trustees might have.

Even with a tight budget, Pugliese was confident that Palisade would still be awarded a $100,000 grant for the 2016 Capital Improvement Plan. County Commissioners are also working with Palisade on plans for improvements to North River Road east of Palisade. Help with local chip/seal projects might also be expected in 2016.

Town Administrator Rich Sales thanked Pugliese for her efforts on Palisade’s behalf, relaying how well the town and county staffs are able to work together.

Trustee Thea Chase asked if there might be any help forthcoming with funding for asbestos abatement in the old high school building at the corner of Iowa and 7th Streets. Pugliese replied affirmatively, expressing the commissioners’ support for the renewal and economic development potential of a renewed building. She agreed that the asbestos abatement is “on our radar” but, again, there is no money in the county’s budget at this time for such assistance.

Cassidee Shull, Executive Director of C.A.V.E. (Colorado Association of Viticulture and Enology), presented Trustees with a framed copy of this year’s Colorado Mountain Winefest promotional poster and a selection of local wines. Shull reported that this year’s Winefest in September was their most successful yet, with all events sold out before the weekend began. She reported informal survey results showing guests from 39 states and 5 countries, with about 6,300 tickets distributed.

Shull also announced that the 2016 event, scheduled for September 15 – 18, 2016, will be the 25th annual Winefest, celebrating a quarter century of promotion of Colorado wines.

Public Works Director Frank Watt presented a short slideshow on the profitability of the solar panels and electricity generation at Palisade’s water treatment facility in Rapid Creek. The panels were installed in summer of 2013.

In addition to announcing the approval of a grant request to fund further tree plantings in Riverbend Park, Watt also reported on ongoing vandalism at the new downtown restroom as well as at the new bike skills park. According to Watt, although the vandalism is certainly unwanted and unappreciated, Palisade is not alone in experiencing public facility vandalism.

Police Chief Deb Funston concurred, requesting any input on the recent vandalism. The public is encouraged to report any suspicious activities to the Police Department or Town Hall. Funston was also praised by Town Administrator Sales for her organization of recent arrests at the house on 5th Street. 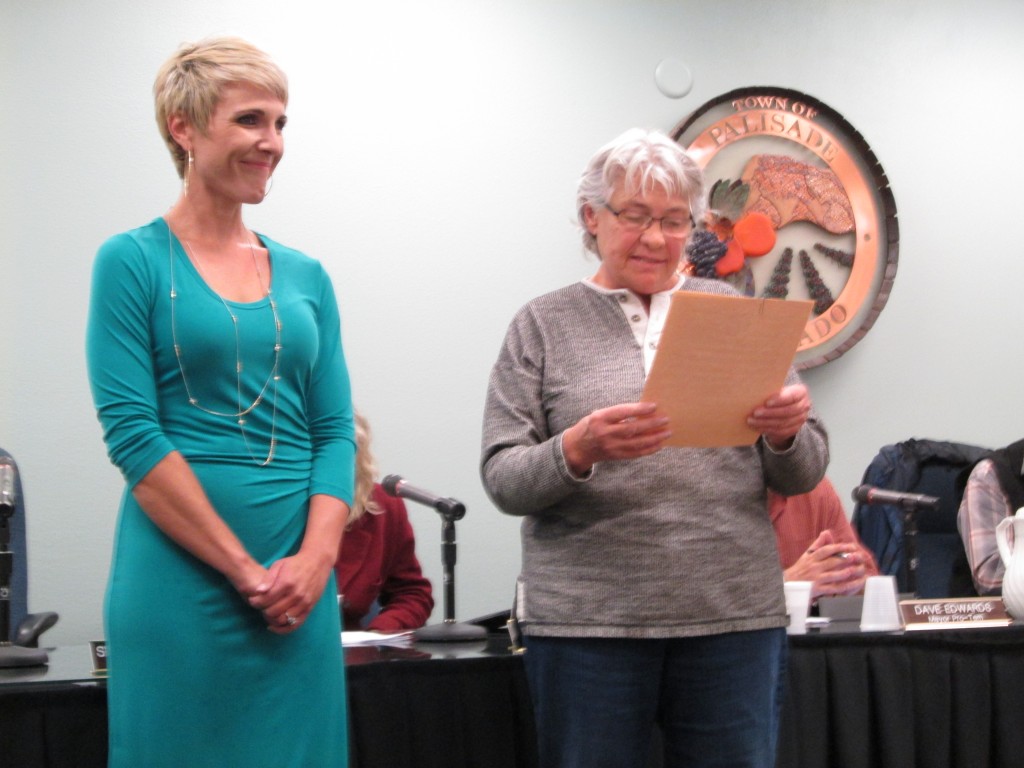 Trustee Susan L’Hommedieu recognized November as Prematurity Awareness Month, referring to premature births, and presented a proclamation of support to Kristi Pollard of the Grand Junction March of Dimes.

In other town business, resolutions were approved to contract Cobb & Associates for the marketing services for the 2016 Palisade Bluegrass and Roots Music Festival at a cost of $32,200, and also to approve funds for the Palisade Chamber of Commerce in the amount of $15,000 for 2016.

Town Administrator Sales was pleased to announce that the Town will be presenting holiday turkeys and hams to staff members for the 2015 holiday season in appreciation of their efforts on behalf of the Town of Palisade.

At the end of the agenda, the board held an executive session. The sessions are closed to the public. No formal action was taken in the session. The session concerned “developing strategy for negotiations… regarding the purchase, lease, transfer, or sale of any real, personal, or other property interest.”

As always, the report presented here is a summary of the evening’s agenda although other topics are also discussed. Agendas of public meetings are available on the Town’s website, www.townofpalisade.org, or at Town Hall at least 24 hours prior to any public meeting.

The next meeting of the Board of Trustees is scheduled for 6 p.m. on Tuesday, Nov. 24, 2015, in the Civic Center meeting room at 341 W. 7th Street in Palisade. The meeting is open to the public.