Trustees meet for final time with Sales as Administrator

Home•Trustees meet for final time with Sales as Administrator

Trustees meet for final time with Sales as Administrator

Tuesday evening’s meeting of the Palisade Board of Trustees began with an invitation by the outgoing Town Administrator, Rich Sales, to come to a cook-out behind Town Hall on Friday (yesterday) where he was cooking! Rich will be moving into the world of retirement after his official last day on Friday, although it is hard to imagine him in a rocking chair.

As always, a reminder of upcoming events was first on the agenda. The annual Edesia, a Culinary, Wine & Spirits Adventure will be held at the Wine Country Inn on April 8 from 2 – 5 p.m. with all proceeds to benefit the Marillac Clinic. The following Saturday, April 14, Downtown Palisade will be buzzing along with the bees at the annual Honeybee Festival. There will be educational offerings as well as all kinds of bee-related products to sample and buy.

On Friday, April 13, there will be a Meet and Greet with the finalists to replace (as if!) Rich Sales from 4 – 8 p.m. at the Veterans Memorial Community Center. Mark your calendars accordingly.

Three public hearings were held along with a number of discussion items.

The Golden Gate Petroleum Co., builder and owner of the new gas station at Exit 42 was approved for a license to sell hard liquor, beer and wine at the convenience store at the new gas station. Although there was some opposition to the license, seeing the new store as a competitor to local wineries, there was also strong support. Golden Gate has expressed interest from the very start of the project in featuring local wines, beers and liquors. Their hours of operation, 8 a.m. – midnight would also expand the market for the local products since most of the winery tasting rooms close at 5 p.m. Store Manager Dave Collier explained that there would be a dedicated area to the alcohol products and that it would be blocked off after-hours. The area would also have a dedicated cash register and very strict I.D. policies. He also mentioned a job fair next month to hire about 15 full and part-time employees locally.

Property located at 754, 756 and 758 37 8/10 Rd was approved for annexation. The request was brought by the town staff, not petitioned for by the property owners as usually happens, and is known as an ‘enclave annexation’. The reason for the request was that the properties had been receiving town sewer services for years, and there is a provision in the Code that allows the town to annex in the property to put them on town water as well. After the annexation was approved, a second public hearing was held to designate the zoning as LDR Low Density Residential.

Discussion was held on the possible addition of a second ‘parklet’ in front of the Slice O’ Life Bakery after a request by owner Curt Lincoln. The structure would be similar to the one in front of the Palisade Cafe and would allow bakery patrons to sit outside with their coffee and yummies. The only real objection was to taking up another parking space for the parklet, which would be removed in winter. It was suggested that the odd parking space in between the two parklets could be used for bicycle parking. Trustees were generally in favor of the idea with details to be worked out with Lincoln.

The Parks and Rec Board (PRAB) was given the go-ahead on a request to use monies from the Conservation Trust Fund to make some improvements to the swimming pool and kiddie pool. About $9,400 is needed to make the repairs. They are also finishing up a survey to be available soon on Survey Monkey for people to give their feedback on the state of Palisade’s parks and recreation programs. It will be announced when the survey becomes available.

There was also a discussion with Dennis O’Keefe, the owner of Golden Gate Petroleum, on possible donation of a small corner of the gas station property to be used for placement of an information kiosk, and possibly a piece of public art. O’Keefe expressed interest in the idea, and will get back to the Trustees regarding the size of the property that he may be able to provide.

The final public discussion was with the owner of H@S, LLC over the status of their retail marijuana application. Although Trustees have enacted an ordinance that specifies that no material changes may be made to an application once it has been submitted, H@S, LLC requested permission to amend their application with regard to the percentages of ownership of the two partners, as well as a few minor changes. Mayor Roger Granat expressed the Board’s regret but said that there were changes that could be considered ‘material’ and that the Board had denied other applicants’ requests for the same. H@S,LLC will withdraw their application.

Trustees also approved a request by Fire Chief Richard Rupp to apply for a No-Match Grant from the Fire Safety Foundation for four air monitors to help the firefighters avoid toxic air and gases when involved in fighting a fire.

Mayor Granat ended the meeting by presenting Rich Sales with a plaque commemorating his service to the Town, then spoke for a few minutes on the accomplishments and positive direction that Sales provided to the Town and staff. He has brought millions of dollars of grant monies to Palisade projects, been instrumental in development of the Cameo Sport Shooting Complex, overseen improvements in the water treatment plant, initiated participation in a solar garden project, and many other achievements. Sales intends to pursue retirement with a vengeance, although he has promised to come back and support many Palisade events. He will be hard to replace, Thank you very much, Rich! 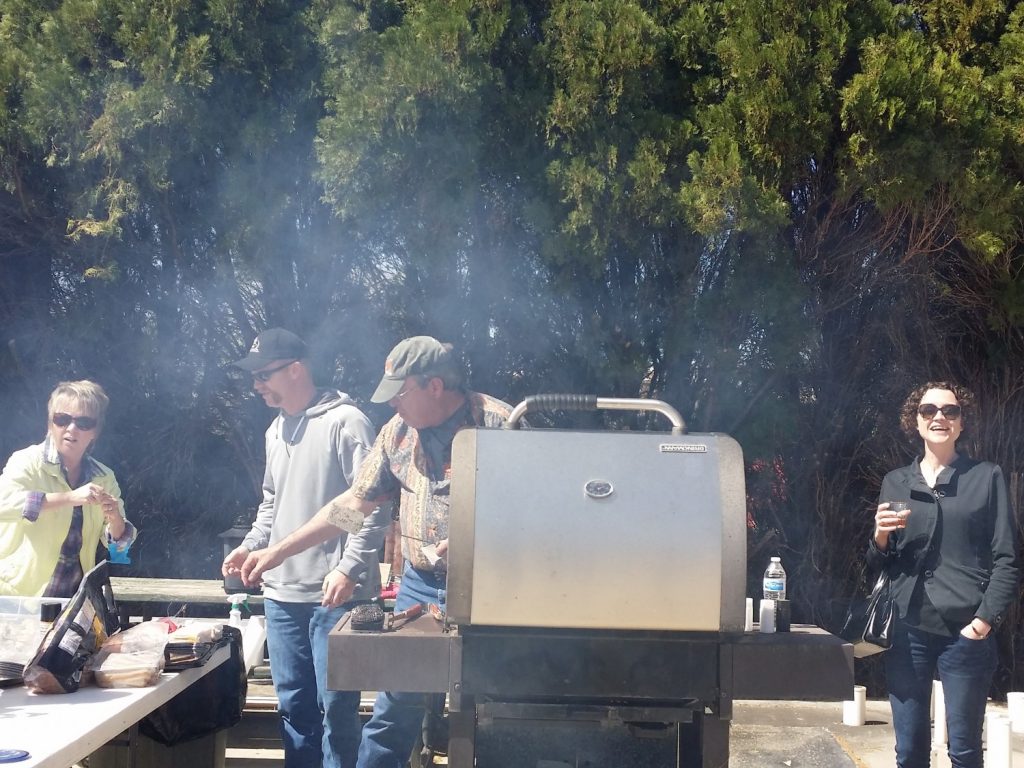 True to his word, there’s Rich Sales in that cloud of smoke, grilling up some burgers and dogs for his friends and co-workers on his last day as Town Administrator for Palisade. Photo by Betsy McLaughlin

The meeting was attended by Trustees Susan L’Hommedieu, Robynn Sundermeier, Mayor Roger Granat, Penny Prinster, Thea Chase and Bennett Price. Trustee David Edwards was absent. The next meeting of the Board of Trustees will be on Tuesday, April 10 at 6 p.m. at 341 West 7th St., with a new Board to be seated. Be sure to vote!