Trustees take on the Plunge

Home•Trustees take on the Plunge

Trustees take on the Plunge

It was ‘standing room only’ at the Civic Center meeting room in Palisade on Tuesday evening, Feb. 23, as dozens of interested citizens of Palisade and beyond crowded in to listen to a discussion by trustees on the future of the proposed Palisade Plunge bike trail. While the exact route is still to be decided, the trail from the top of the Grand Mesa down into the valley will likely end somewhere in proximity to downtown Palisade.

The nearly three-hour meeting was devoted mainly to answering the first question, since there is a deadline looming for consideration for Great Outdoors Colorado (GOCO) grant funding. The Palisade Plunge is on the list of the ’16 Trails for 2016’, a list of trails that the Governor’s office has deemed worthy of granting added assistance and funding to. The objective of the program is to get selected trails and trail sections finished and into use, promoting outdoor recreation in Colorado.

With cost estimates approaching $500,000, Trustees were hesitant about committing to the project. They were reassured by Scott Holzschuh of Colorado National Bank, who reminded Trustees that although the grant in question is known as a reimbursable grant (the funds would have to be paid out first for construction and other expenses, then would be reimbursed with the GOCO grant funds), most banks, including Colorado National Bank, would be likely to loan money on a short term basis to cover the costs of building the trail, since grant funds from Great Outdoors Colorado (GOCO) are considered to be very secure.

Although it is a generous offer, such short term bank funding would also include payment of interest on the funds borrowed, something Trustees might avoid if able to convince either the City of Grand Junction or the Mesa County Commissioners to partner with the Town of Palisade on the funding.

Trustees discussed points such as how to pay for the trail, who the town should consider partnering with to get the most bang from the buck, and where the route should and should not go.

Following a lengthy discussion, Trustee Bennett Price asked for feedback from the dozens of meeting attendees, since they had all taken the trouble to be there. 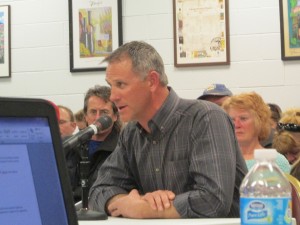 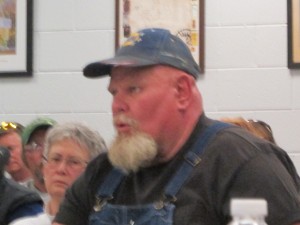 Brett Fontanari of the GoBoy Mine opposed the bike route, saying that bicyclists should not plan to use Rapid Creek Road to access the route.

As have been heard at other recent meetings, there is a group strongly in favor or getting the trail started, as well as a group that is strongly opposed.

While proponents argue the benefits that mountain biking trails can bring to the community, opponents are worried about conflicting uses such as hunting and horseback riding, and also about increased trash, lack of bathroom facilities, and crowds of cars and people at the parking lot on Rapid Creek Road, a possible finish to the bike route. There is a second end-section to the route proposed, with riders finishing on Horse Mountain.

Trustees were concerned that if they invested in the project, they also wanted the riders to have easy access to downtown Palisade at the end of their ride. Shuttles are planned to be a part of the proposed Plunge, taking riders from Palisade to the bottom of Powderhorn Mountain Resort, where they can take the new chairlift “ The Flat Top Flyer” to the top of the ski area, where the Palisade Plunge could begin. Not unexpectedly, Powderhorn Mountain Resort General Manager Sam Williams spoke highly of the project, adding that they hoped that Palisade would become “Powderhorn’s ski town”.

There were also strong statements of support from the Palisade Chamber of Commerce, represented by Chamber Board Chair John Sabal, who also volunteered to serve as a project coordinator if necessary.

Mayor Pro-tem David Edwards supports the creation of the concept paper, saying “I think the Palisade Plunge puts us into the same realm as Moab, Fruita and Crested Butte for having excellent mountain biking.” Edwards also pointed out that the Town had no funds to spend on the project, so support depends on creative financing arrangements.

Trustee Bennett Price was also in favor of submitting a concept paper. Realizing that it could take another two or three years till completion of the trail, he continued, “I think we need to have that recognition that we are working toward helping our own self.”

Mayor Granat summarized by saying that the board agreed by consensus to support the development of the concept paper, realizing that many hurdles are still ahead before realization of the end goal.

Town Administrator Rich Sales then explained a number of options for financing the project, and how the choice of partners might affect each option. He stressed that NO town funds will be used for the project, other than the work done by town staff in filing grant applications and searching for financing partners. He has had some preliminary discussions with different government and non-profit entities regarding partnering with the town, since the benefits of the trail would extend beyond those to the Town of Palisade.

The immediate resolution was to schedule a special work session for Monday, February 29, between Trustees and COPMOBA and any interested partners in the venture to try and move the discussion further toward the production of the concept paper and any other information required by GOCO for their March 8 deadline. As with all meetings involving more than two members of Town staff or a committee, the meeting will be open to the public.

Consideration of the Palisade Plunge concept paper is on the Monday March 7 County Commissioners agenda. The regularly-scheduled meeting is set for 9 a.m. at the Old Courthouse, 544 Rood Ave., Grand Junction.

“It is very important that the Commissioners hear your voice!,” Juliann Adams, executive director of the Palisade Chamber of Commerce, said in an email to members. “Please plan on attending the meeting, if at all possible,” she said.

Adams said commissioners consideration is the next step in seeking county support in the concept paper submission. 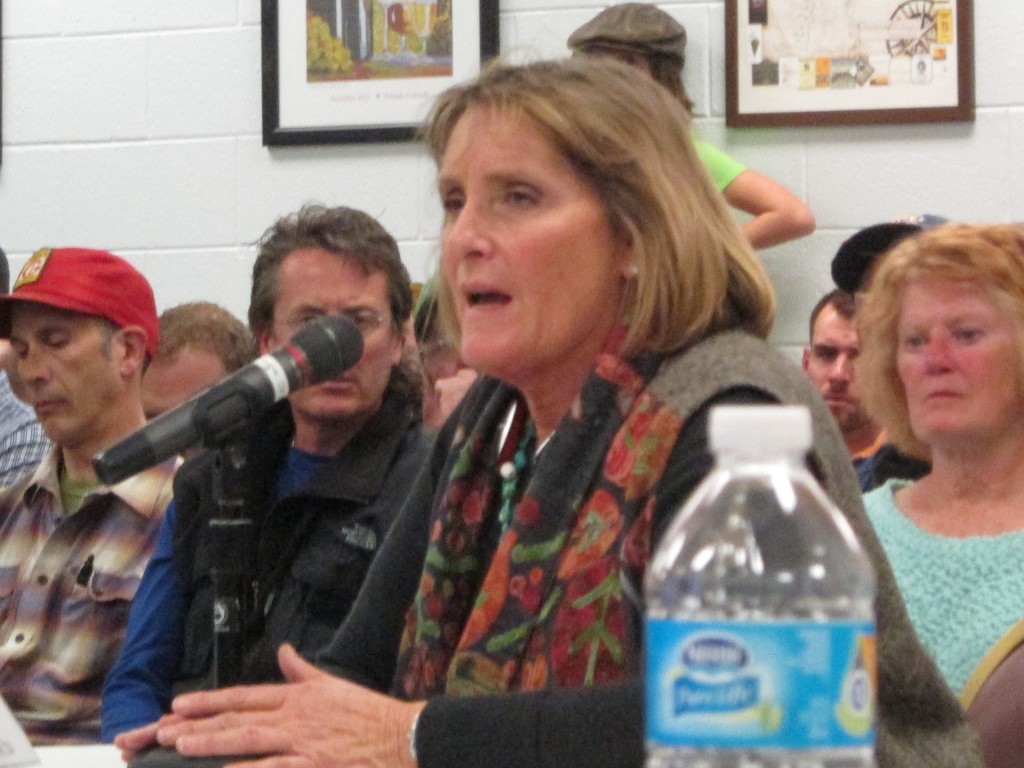 Local business owner Naomi Smith of Grande River Vineyards encouraged trustees to consider the development of the Palisade Plunge, considering the economic benefits it could bring to local businesses.

Jaeda Cannizzaro was introduced to Trustees as the newest member of the Palisade Police Department as a reserve officer. She has been working with School District 51 and also with the Mesa County Sheriff’s office. 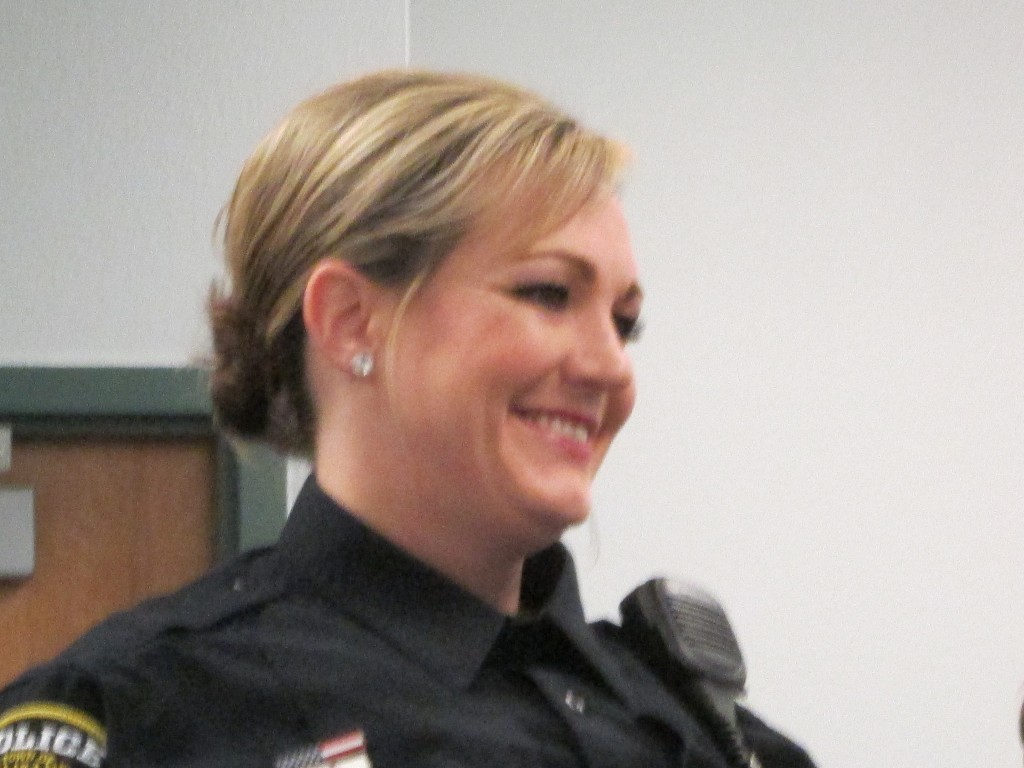 Two area businessmen were confirmed by Trustees as new members of the Tourism Advisory Board (TAB) which meets on the second Tuesday of every other month. Dennis Clark, of Clark Family Orchards, and Harry “Charles” Talbott, of Talbotts’ Cider Company are both longtime residents of the Palisade area. Clark expressed interest in agritourism, saying that he “thought it was time to know what’s going on and how we’re progressing with agritourism… I’d like to see the town flourish, so let’s bring some people here.”

Talbott’s family is also heavily invested in the fruit business; he is now branching out into the hard cider market. As a former U.S. Marine, Charles has traveled extensively, expressing interest in seeing how other areas of the country dealt with agritourism.

Both men were unanimously confirmed by Trustees and are ‘ready to go’ for the next scheduled meeting of TAB on Tuesday, March 8 at noon in the Civic Center meeting room.

The Parks and Recreation Advisory Committee (PRAC) held a work session with the Palisade Board of Trustees before the regularly scheduled meeting of the trustees on Tuesday evening at the Civic Center, 341 W. 7th Street.

Members of PRAC had been asking for the meeting, requesting more direction as to what projects or areas of interest are important to the trustees. The main difficulty seems to be a lack of communication between the two bodies. Ideas were tossed around on how to improve the communication; including a monthly lunch/walk-around meeting between the PRAC chair and Public Works Director Frank Watt to inspect and discuss the parks and facilities regularly.

Mayor Granat suggested that PRAC members may want to look at the annual town budget to get an idea on how much money is available for recreation programs, and also what else (including non-recreational issues) the trustees consider as priorities. He wants to explore different uses for Peach Bowl Park, for example.