A varied and crowded agenda led to a crowded meeting room at the Palisade Civic Center on Tuesday evening, July 22, for the bi-weekly meeting of the Board of Trustees.

Members of the Park and Recreation Advisory Committee (PRAC) met with Trustees for an hour-long work session immediately before the 6 p.m. meeting began, and were able to update each other on plans, goals and wishes.

Town Recreation and Events Coordinator Sarah Brooks and Trustee Cody Butters, who is also Chair of PRAC, outlined the repair work that was recently completed on the skate park at Memorial Park.

Butters informed the board that over $6,200 had been raised by local donations and fundraisers, noting that the ‘change jars’ are still placed around town, pointing out that “every little bit helps!”

Approximately $5,000 was spent on the rebuild/repair project, with only a few supplies like paint still to purchase. Any remaining funds will be kept for ongoing maintenance and repairs, and towards the building of a more permanent facility in the future. 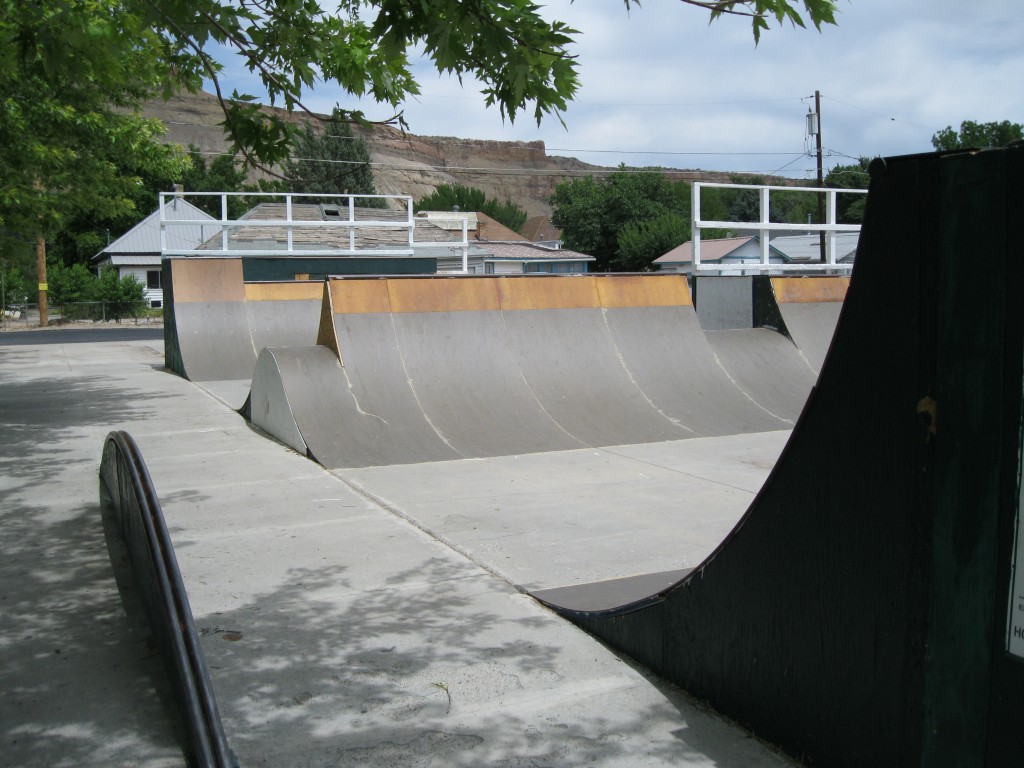 The current repairs are expected to last from 3 – 5 years, during which time PRAC and other interested community members will research the building and funding of a permanent skate park.

PRAC member Winslow Roberts asked for direction from trustees in terms of location of a permanent facility, since Riverbend Park had been considered in the past. Mayor Roger Granat expressed his desire to see the new skate park remain ‘up’ in town either at its current location or at PeachBowl Park, where more of town businesses might be impacted positively. It would also be easier to supervise.

The possibility of moving either the skate park or the basketball court currently adjacent to the skate park to PeachBowl Park in the future was also discussed, to give more space to each while keeping them both in town.

Public Works Director Frank Watt informed the board that a new, concrete skate park with a modern design could run as high as $500,000, but trustees feel that it is an important amenity for the young population of Palisade. Grant funding can often be procured to help offset much of the expense, and PRAC will investigate.

There was also a discussion of shade structures to be erected in Town Plaza. Rich Sales, town administrator, offered to speak with Foodtown owner Kelly Myers about the possibility of putting some secure anchor bolts in the side of the building, or possibly the attachment of some kind of retractable shade. Although the plaza was designed for town gatherings, it has been found to be awfully hot under the blazing sun, especially for performers.

Assuming some type of shade structure, it was also suggested that there be more live entertainment in the Plaza, maybe with an “open mic” type format.

PRAC feels that some type of shade structures are a priority to make the Plaza more usable, especially since there will eventually be a restroom facility. The town is in the process of purchasing the brick building north of the Lavender Lady, next to the railroad tracks, for the installation of public restrooms.

Sarah Brooks also announced the dedication of the Community Garden, to be held on Wednesday, Sept. 10, at 6 p.m., at the garden. She mentioned the desirability of some type of shade structure to be placed at the Community Garden also, maybe with a picnic table, and mentioned how nice it would be to have a porta-pottie as well. She also informed the board that although the garden is now using a composter generously built for them by the Palisade High School Shop Class, the garden could use at least two more to keep the supply of compost moving. She also invited the community to supply compost materials, but please check with her first to learn the rules and to gain access to the composter.

Brooks then tackled the topic of a bike skills park. There is roughly one acre of land available at the east end of the lagoon ponds, at the south end of Brentwood Ave., that could be used for a bike skills park. It could be built in sections as a progressive project, with more features added as time goes on. Brooks had a sample design prepared to show the board, and explained the different sections of the project. It appears likely that some funding could be available from Mesa County for design and construction, Brooks will keep working on it.

In a discussion of an outdoor amphitheater, also on PRAC’s wish list, Mayor Granat expressed the opinion that he would like to see some type of remodel to the rotunda on the front of the Community Center, and, instead of a circular walkway-ramp, he would put a stage for musical productions. Again, he cited the desire to keep business in town, instead of down at Riverbend Park.

After a short break, Trustees continued with their regular meeting, opening with a presentation by Frank Watt and Brad Taylor of the Riverfront Commission. Narrating a slide presentation on construction to date of the Riverfront Trail, Taylor pointed out that the trail has been 27 years in the making, an “overnight sensation,” but it could be 2 or 27 more till its completion. There is still a gap between 33 ½ and 36 ¼ Roads on the Palisade end of the trail.

The Colorado Lottery and Great Outdoors Colorado are the primary funders of the Riverfront Trail, and are pleased with the progress so far, he reported.

Taylor also discussed the new section of the trail to be opened in the next month or two, connecting Fruita and Grand Junction. The ribbon cutting for the new segment is tentatively set for Sept. 5. Watt will provide more details as they are available.

Local announcements included two new events to be added to this year’s PeachFest to be held from August 13 – 17.  On Wednesday, Aug. 13, the Grand Junction Colorado Rockies will host a Palisade Night. Palisade residents will be offered discounted tickets for the game, and a small version of the Sunday Market will also be set up at Suplizio Field to promote Palisade businesses. Please plan to attend, other fun activities are planned for the evening at the stadium as well.

Due to the growing success of cakewalks at Palisade festivities, there will also be a “Peach Walk” as a part of the Thursday evening Ice Cream Social and Street Dance that traditionally opens the PeachFest weekend. There will be a cakewalk featuring Palisade Peach desserts and treats, residents are asked to bake something to donate to the PeachWalk. The Queen and Peach Court will be introduced and crowned on Thursday evening, and a Town Grouch will be nominated to serve for the next year as well. It promises to be a fun evening, more of a ‘local’ celebration than the festival at the park on Saturday.

Town Administrator Rich Sales reported on the success of the past month’s Bluegrass and Roots Festival. He announced that the festival is now “in the black” and asked for direction from the Board on starting ticket sales for the 2015 event already. He pointed out the desirability to keep the festival in the news, and stated that the pre-sales also help attract talent and vendors earlier. Although the Board has not formally decided to put on the festival next year, they okayed the pre-sales of tickets at this time, since the tickets are sold on a ‘blind faith’ basis, that is, the public is aware that the lineup has not been set.

Palisade resident Mark Bartholomew used the Public Comment period to request more information on the disposition of the 100+ signature petition that had been filed with the Town Administrator two weeks previous, regarding the request for reinstatement of Police Office Ed Reinhardt. There is disagreement among some residents as to the legality of the termination, and a concern that there could be a lawsuit(s) filed against the town suggesting wrongful termination. Mr. Bartholomew was very concerned about the liability position of the town.

Chapin Plumb, another Palisade resident, voiced his opinion on the possibility of a ‘Barking Dog’ ordinance, saying simply “Dogs bark!” Although he noted that a dog left alone outside all day while an owner is away can certainly be a nuisance, and should be dealt with, regular, occasional dog barking is what dogs do, and to try to regulate it would be “ridiculous.”

Annexation and rezoning of a parcel of land just north of the Highline Canal that had been recommended, noticed, and approved at previous meetings, was given final approval Tuesday evening. Owned by Brian and Rebekah Cox, the land currently in use as an ‘aging’ peach orchard is planned to be cultivated in cannabis by Colorado Alternative Medicine owners Jesse and Desa Loughman. While it is currently illegal to grow cannabis outdoors, that legislation could be amended in November after the citizen vote on selling marijuana for recreational use in Palisade. It is important to note that the annexation and zoning change do not make it legal to grow cannabis outdoors.

The remaining vacancy on the Planning Commission was filled with the appointment of Lafe Wood, a Palisade resident and mechanical engineer, to the seat. Also considered was Marlys Griggs, who was encouraged to apply again and to also attend some of the commission’s meetings in the meantime, to familiarize herself with the particular issues ongoing.

Public Works Director Watt gave an update on the sidewalk reconstruction scheduled to take place between 8th street and Granada Ave. on the east side of Brentwood Ave. A new sidewalk with graded ramps for wheelchairs and strollers will be installed during the next few weeks. The chosen contractor had planned to begin on Monday, Aug. 4, but after being notified that school starts for the school year on that date as well, he agreed to try to push the construction plan up by a week. The new sidewalk will be ADA (Americans with Disabilities Act) compliant.

Trustees also voted to enter into a license and construction agreement with School District 51 on installing fiber optic cable to all district schools. Although town participation is not required, the Town would have more of a voice in decision making by being a partner.

In a final housekeeping action, trustees passed Resolution 2014-39, designating the development of a sports shooting complex in Cameo to be an important piece of Palisade’s economic development plans. Formal designation was required to fulfill grant request requirements. 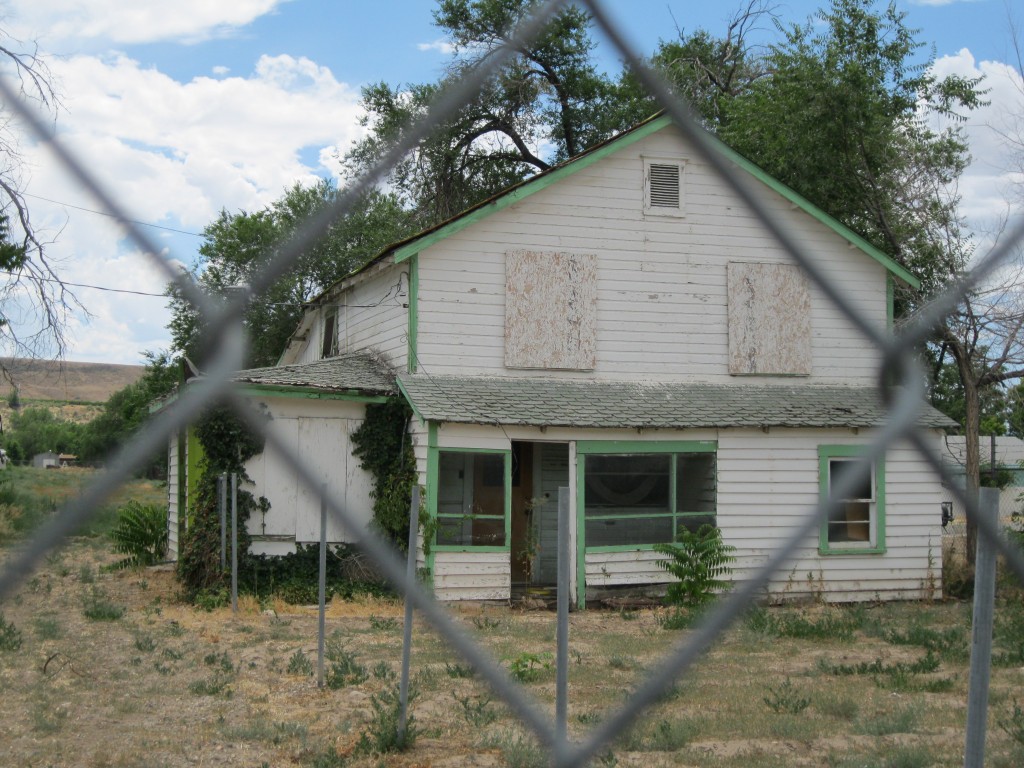 The idea is that the rundown house will ‘be gone,’ and it’s property and the narrow strip behind it will be used as another safe route to school at Taylor Elementary for students on the west side of Palisade.

All Trustees were in attendance at the meeting, which adjourned at 8:10 p.m.