It is my privilege to post this story today from Debbye Harmon. The first time I met Deb was when I hired her to work at the Wine Country Inn several years ago and I knew then there was a special kindness about her. She won the hearts and admiration of many of the hotel guests as she served them breakfast every morning.
Deb has a new passion now as the Founder and Director of Trail Song. Trail Song is an organization that is training rescue dogs to aid in the transition of our vets coming home from service. They help the vet to adjust to normal life and alert them to a distraction or someone approaching that would set off a defensive reaction combat instilled. I got to see Aero and his new family at the hotel on Tuesday and so I asked Deb to tell this story.
“For many visitors to Palisade, it is a destination offering award winning wines, delicious fruits and vegetables, charming B&B’s and the first wine themed hotel in Colorado, summer festivals, and all celebrated in a lovely town known for the warmth of friendly people. For Ron and Valerie Smith, it was something quite different. Ron is a veteran suffering PTSD and other issues, and he and his wife left their home in Indiana to drive more than 1,000 miles to a small town in Colorado for what they hoped would change their lives. This life changing prescription? A dog named Aero.
Ron and his physician at his local VA center both believed a support dog could make a positive difference. Believing that was the easy part. Finding the right dog proved to be the same confusing and expensive dilemma that it is for many veterans. As Ron and his wife searched their state for a support dog for Ron, they found places offering very expensive service dogs for which the waiting list is 2 to 3 years.
Service dogs are more for persons with physical disabilities, such as dogs for the blind, and that was not what Ron needed. Their search in Indiana for support dogs turned up empty, though there were plenty of people offering to train a purchased or adopted dog for support dog work, and their training fees were in the thousands. Confused and very dispirited, Ron and his wife did not know where else to turn for the help he so much needed.
That all turned around one day when Ron, in trying to lift his spirits, played a game online with another veteran who lives in Grand Junction, Colorado. That veteran told Ron about TrailSong, a nonprofit in Palisade that trains and provides support dogs for veterans at no cost to the veteran. Hope sprang back to life, Ron contacted TrailSong, and the journey to healing began.
There was a Rottie mix named Aero who knew the heartache of being unwanted and not having a home. Her foster parents quickly realized she was a working dog who needed a job, and she had a heart full of love if she could only find someone who wanted that love. Ron was directed to her online photos, and was immediately drawn to her soft, sweet eyes. A love story began that day!
Training began to teach Aero how to be a support dog and her lessons were tailored to the needs of Ron, as they are with each dog once they have been matched to a veteran. And when her training was complete, it was time for Ron and Valerie to happily embark on a journey to the little town of Palisade, Colorado.
Wine Country Inn was most gracious in accommodating Ron and Valerie with a substantial rate discount and in providing for their needs, including allowing Aero to accompany Ron everywhere he ventured on the facility as well as staying with him in their room. It is a beautiful setting for such a happy event, and all of us involved are very thankful for the warm hospitality provided by Wine Country Inn.
We have all heard about matches made in Heaven, and this seems to be one of those! Aero immediately utilized her training, and is doing a fine job. Ron had previously suffered enormous difficulty going into public facilities and avoided them unless he had no choice. He was mostly a recluse, always staying home and only going to the VA when he had to for his appointments. With devoted Aero at his side, he went to a winery in Palisade and even went inside for wine tasting. This was a huge milestone for Ron and his wife, as they now look forward to enjoying life again thanks to a 60 pound prescription known as Aero.
And love? Aero has plenty of kisses for her new dad as she joyfully celebrates that she finally found someone to give her heart to. As for Ron loving her, that can best be summed up when someone asked the Army veteran if he wanted to keep her. He quickly responded, “You just try taking her from me!” 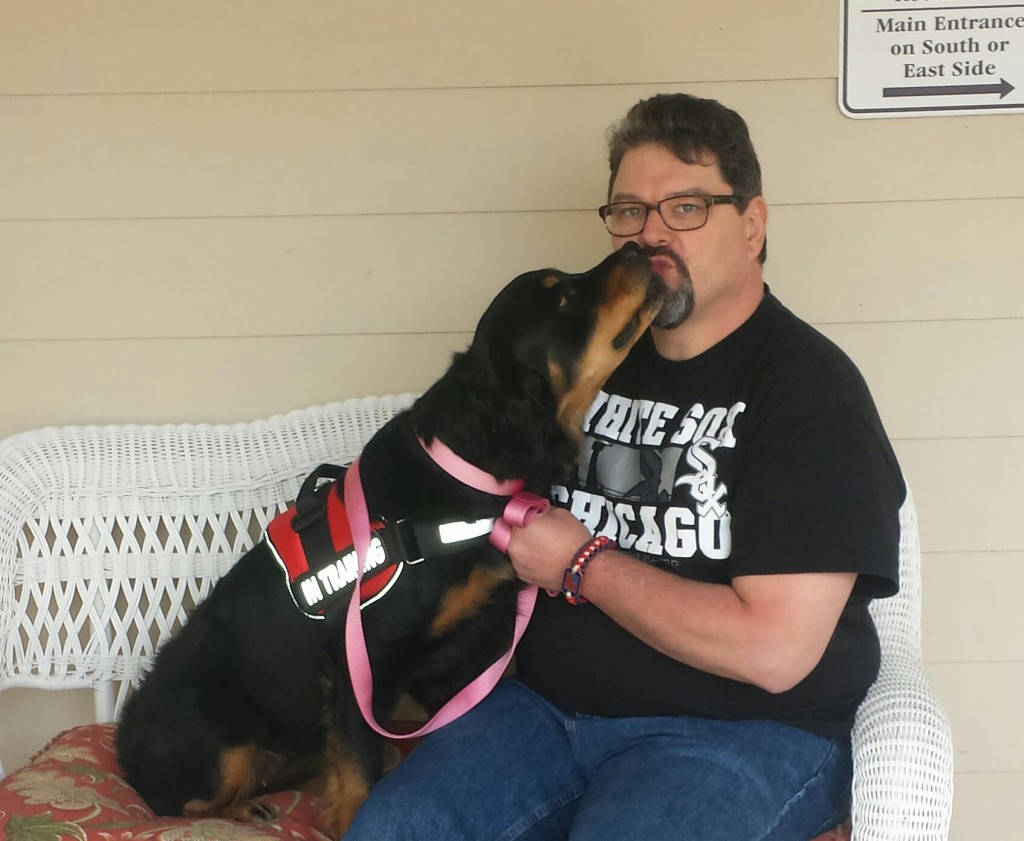 Trail Song needs volunteers. Volunteers are needed for numerous tasks such as transporting dogs, fostering and training dogs and fundraising. Classes will soon begin to teach how to train a dog for support work, and it is not nearly as difficult as some might think. Deb hopes to build a strong team of volunteers in Palisade. If you are interested in helping on any level, please call Debbye Harmon at 970-462-6661. Or email to: countryfine@hushmail.com.